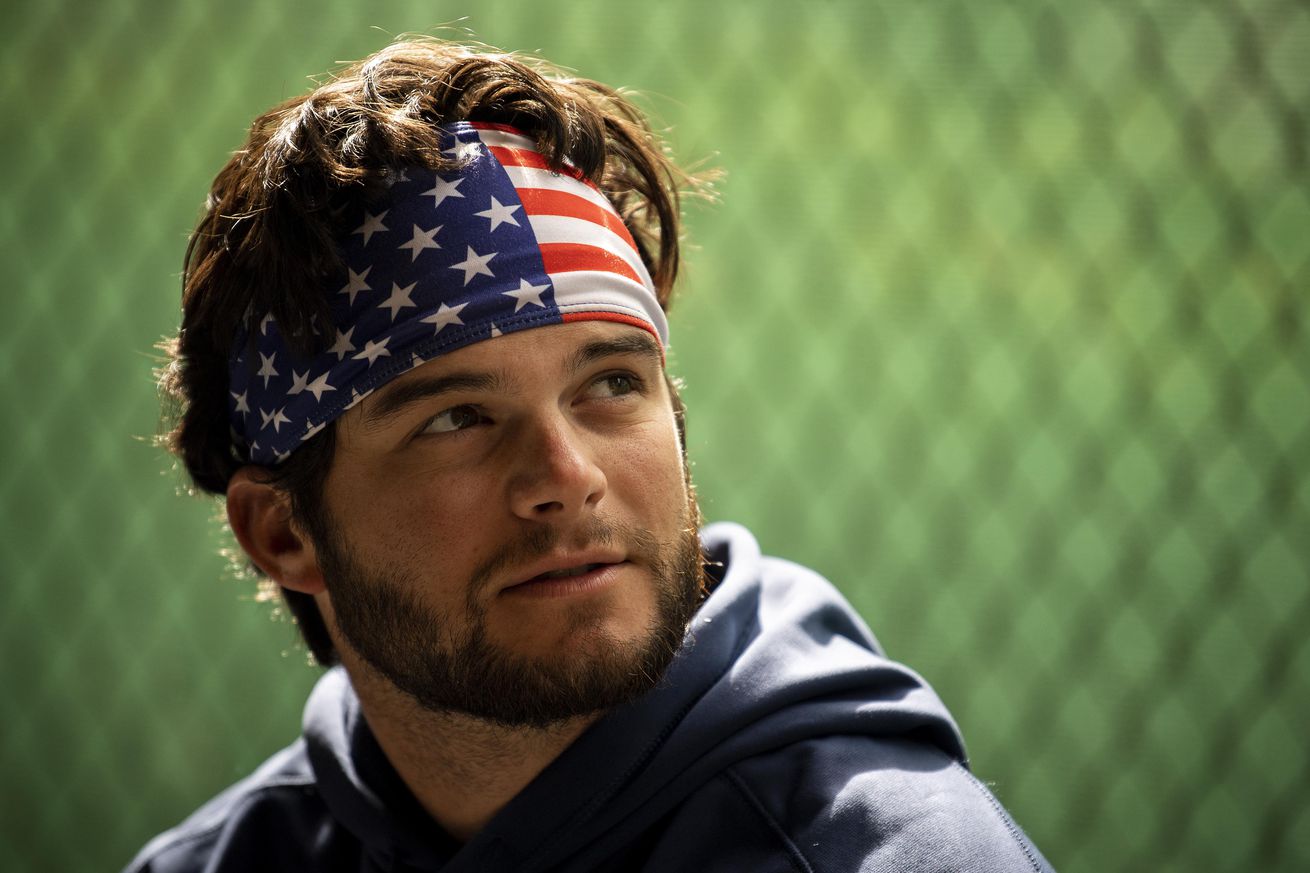 We move out to the grass as we continue our look through the depth chart.

Over the next eleven days, we are going to take a look at the Red Sox depth chart to break down each position both in the short-term and the long-term. We’ll look at projected starters, bench pieces, depth options, top prospects, sleeper prospects, other prospects, where the starter fits in the division in terms of projected fWAR using FanGraphs’ Depth Chart system and an overall view. Today we move out to left field.

Benintendi has settled in over the last few years as the Red Sox stalwart at this position, though there was some question if he’d end up moving over to center for the coming season in the event Jackie Bradley Jr. was traded. That never came to fruition, and Benintendi will once again be hanging out in front of the Monster. The former top prospect in baseball, he’s been somewhat disappointing in his first few years in the majors, though I certainly wouldn’t go so far as to call him a bust. There were big expectations that largely have not been lived up to, but even in his worst years he’s been a usable, average regular with solid defense in left and average hitting.

That said, he was obviously supposed to be more than that. Now Benintendi is still only 25 so it’s far too early to say there’s no more development coming, and the Red Sox need him to find that next gear consistently now that Mookie Betts is gone. The good news is the tools are still there and we’ve seen it as recently as 2018 when he finished with a 122 wRC+. From the outside it appeared he tried to do a bit too much last year, and that started right from camp when he came in a little bit bigger looking for more power. I’m looking for a more simplified approach that can make him a 115-125 wRC+ on a regular basis. Maybe not a superstar, but a damn good player.

It’s not entirely accurate to call J.D. Martinez a bench player since he’ll obviously be settling in as the DH on pretty much a daily basis. That said, in the case of injury or on the occasion Benintendi needs a day off, Martinez has been used in left field and I would expect that to continue. It’s never ideal having him in the field, but at least at home Fenway’s left field is small enough that his range isn’t as much of an issue. Pillar’s value is mostly with his defense, so while he’ll probably play some left field here and there if he needs to, it certainly lops a little off the top of his overall value. With Muñoz and Lin, they are more emergency options and likely won’t get much time in the outfield if/when everyone is healthy. That said, a big part of their value and a significant chunk of their argument for making the roster if baseball does come back this year lies in their ability to play both on the dirt and out on the grass.

High-level outfield depth in the minors is among the biggest weaknesses for the Red Sox for a potential 2020 season. If things went well in a normal year, Jarren Duran could have been a late-season option here, but I don’t see that happening with the development year being so weird for minor leaguers. Wilson has the most upside of this group, but has real swing and miss issues to overcome before he can be counted on for his major-league debut. Puello has the major-league experience, but not much of a track record. Castillo, well, I don’t actually think he has a real chance to play in the majors if there’s baseball in 2020, but I know someone somewhere would have yelled at me if he wasn’t included in this space. This one’s for you.

I like Gonzalez a little bit and I’ll get to that in a second, nor do I want to make it sound like I’m gritting my teeth. However, I do have to mention that left field prospects are not really a thing in most systems. Generally, a left fielder will be in either center or right field until the very end of their minor-league career. Even Gonzalez can play some right field going forward, too. Wilson is mentioned above, for example, but right now he’s either a center or right field prospect. Cool? Cool.

Anyway, Gonzalez is an interesting prospect in his own right, albeit one who is relatively far away. He was signed two summers ago out of the Dominican Republic for a solid $500,000 bonus and had a good showing in the DSL last year. He’s still only 18 until September and there’s a ton of lead time here, but Gonzalez has a path to being a regular thanks to his above-average power and the toolkit being there for him to make enough contact to make the most of it.

Again, there’s not a ton of options here, but Dearden is interesting. He was picked down in the 29th round in the 2017 draft, but that was largely due to signability questions and he had a little bit of hype coming out of high school. He hit well in his first two seasons in the GCL and Lowell, respectively, but 2019 was a struggle both from a performance and a health perspective. Dearden is still only 21 and should get to High-A if they play this year and has solid power potential. The question is if his hit tool will develop to the point at which the power plays in games.

For all of the (mostly, I think) valid disappointment around Benintendi in his early career I do think these rankings put a little in perspective how different left field is around the league at this point. It’s not just in the division, either, as Benintendi is projected at number five at the position in the American League as a whole. Meadows certainly has more upside at this point and I will not disagree with him being above Benintendi here, but the Red Sox left fielder I also feel is a clear number two. I am very high on Gurriel and think he’s my clear number three, and I may even argue he’s closer to Benintendi than to Tauchman below him, but I’m also having a little trouble buying into Tauchman as more than a flash in the pan. That said, we don’t know when the season is going to be starting and Aaron Hicks should be back at some point after the original All-Star break. At that point, Brett Gardner would likely move over to left and he is, at least in my mind, a safer bet for New York.

I am still in on Benintendi, as I said above, as a very good though short of great player moving forward. That said, there are some questions of his position in the future with Jackie Bradley Jr. potentially leaving in 2021 as a free agent and Benintendi possibly moving to center field. There’s no clear backup plan in the organization in that scenario except for Duran, who would enable Benintendi to stay in left.