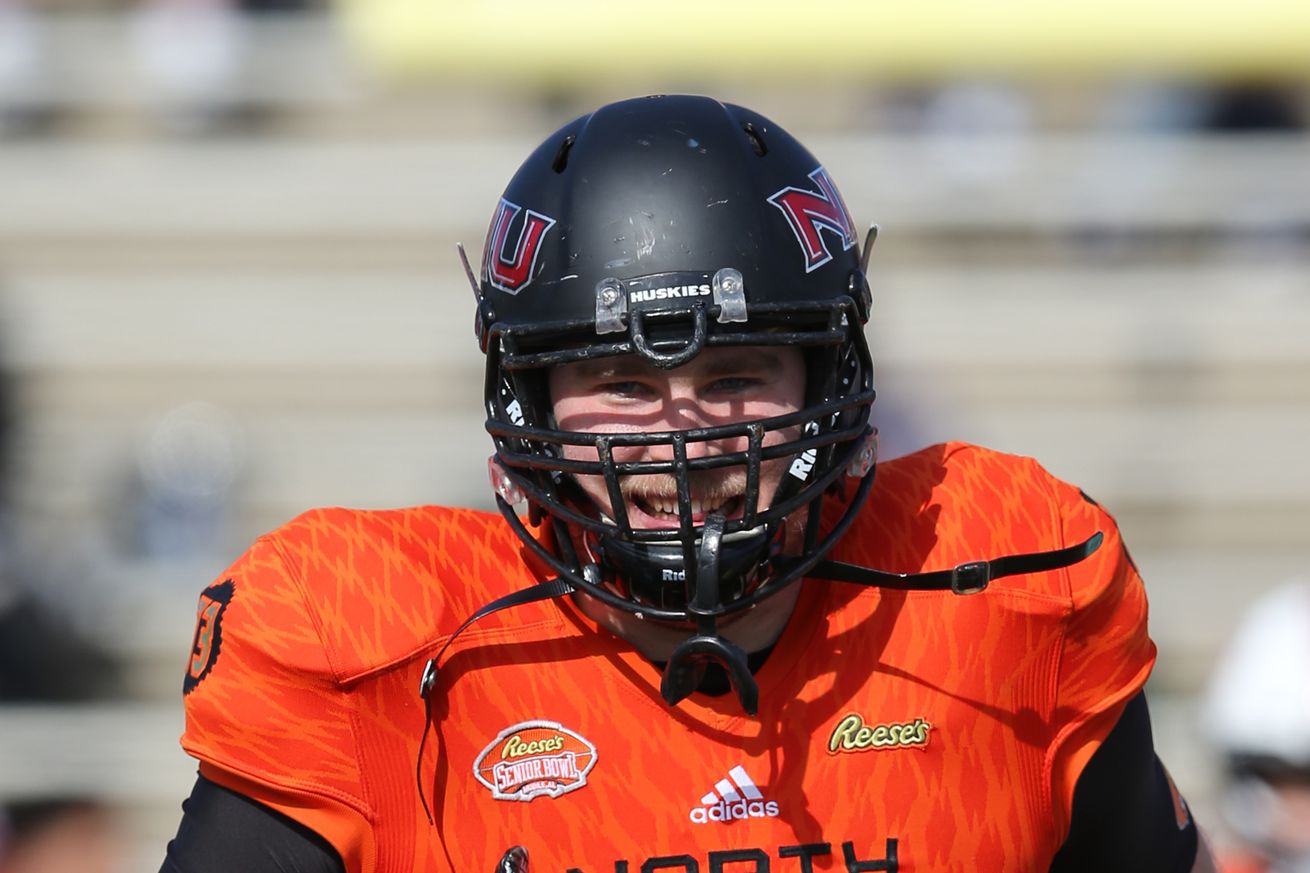 Scharping could be the Patriots’ long term solution at left tackle or Marcus Cannon’s successor at right tackle.

If you are wondering why I skipped #6, there is already an excellent article on Deebo Samuel’s fit with the Patriots by Bernd. Instead what I’ll do is move onto my #5 fit for the Patriots in the draft with NIU OT Max Scharping. The Patriots have drafted a tackle in the first three rounds twice in the last two years, but both players have not played a single regular season snap to date. Antonio Garcia had an off-the-field health issue that led to him being released one year after getting drafted and Isaiah Wynn missed his rookie season with a ruptured Achilles tendon. The team does not a well-defined solution for the LT position going into the draft for the second straight year, although they figured out something last year by drafting Wynn and trading for Trent Brown on the first night of the draft. History may repeat itself again a year later.

In the draft, the Patriots will likely miss out on Jonah Williams and Andre Dillard. The rest of the OT group, which is a much deeper class this year, should be up for grabs although we’ll likely see at least 4-5 of them taken before the Patriots go to the board.

Reasons Why the Patriots Would Draft Him

Scharping profiles as your quintessential Patriots offensive lineman prospect. He’s a hard worker with good football IQ and athletic traits who just needs to work on his technique. Fortunately, the Patriots have the answer to that problem in the form of OL coach Dante Scarnecchia, who has turned even less talented OL into Pro Bowlers. For a small school prospect, he’s pretty close to NFL ready to start at either tackle spot. Even though the Patriots drafted Wynn last season, that should not stop the Patriots from picking up Scharping because if Wynn is able to make a full recovery, then the Patriots have 2 talented OTs on rookie contracts.

Reasons Why the Patriots Would Not Draft Him

Biggest reason for me would simply be the Patriots picking someone else, especially if a more NFL ready prospect who grades much higher falls into their draft range. Also given that Scharping is also almost a plug and play starter at a premier position in the NFL, 31 other teams will have some interest. I get the feeling if he’s not going to New England that he’s going to Green Bay.

The Patriots will likely swing a trade for a veteran LT to start right away and allow Scharping to develop at his own pace. If the Patriots pull the trigger on him, there is really isn’t serious competition for him to claim a 53-man roster spot with three bottom-end roster guys/practice squad players he would have to beat out.

Scharping ideally should be put in a position where he is not forced to start right away. The Patriots do have a question mark at LT and a longer concern at RT with Marcus Cannon now 31 years old. If he’s good enough to start right away, then I see no issues here. In the event he is not starting in Week 1, I’d like to see him play the 6th OL/3rd OT role at the goal line to get him some experience. The Patriots did that to develop Sebastian Vollmer, Nate Solder, and Cannon before putting them in the starting lineup.

Scharping would be a starter at either tackle spot, depending on what goes on Wynn. If Wynn recovers from the injury and locks down the LT spot, then Scharping will eventually take over at RT for Cannon. Should Scharping somehow swoop in and win the starting LT job as a rookie, then that’s where he’ll be for 4 years with Wynn ending up at RT. Wynn will get the first opportunity to lock down the LT job between the two.

Scharping is a high-end 4 on the scale for me, as he’ll need a bit of time to develop without the pressure of being thrown into the fire early. The Patriots are one of the few teams that will be able to afford him that luxury barring injuries. He can already contribute as an extra blocker on the goal line while he works with Coach Scarnecchia with pass pro technique.

First round is a bit rich because he doesn’t have plug-and-play starter value like Wynn did a year ago. However, he should be a target on the team on Day 2, particularly in the 2nd round when looking for a guy who will develop into the starter by the end of his second training camp. Isaiah Wynn’s selection a year ago should not prevent the Patriots from taking Scharping because having two quality OL on rookie contracts is a great thing to have.