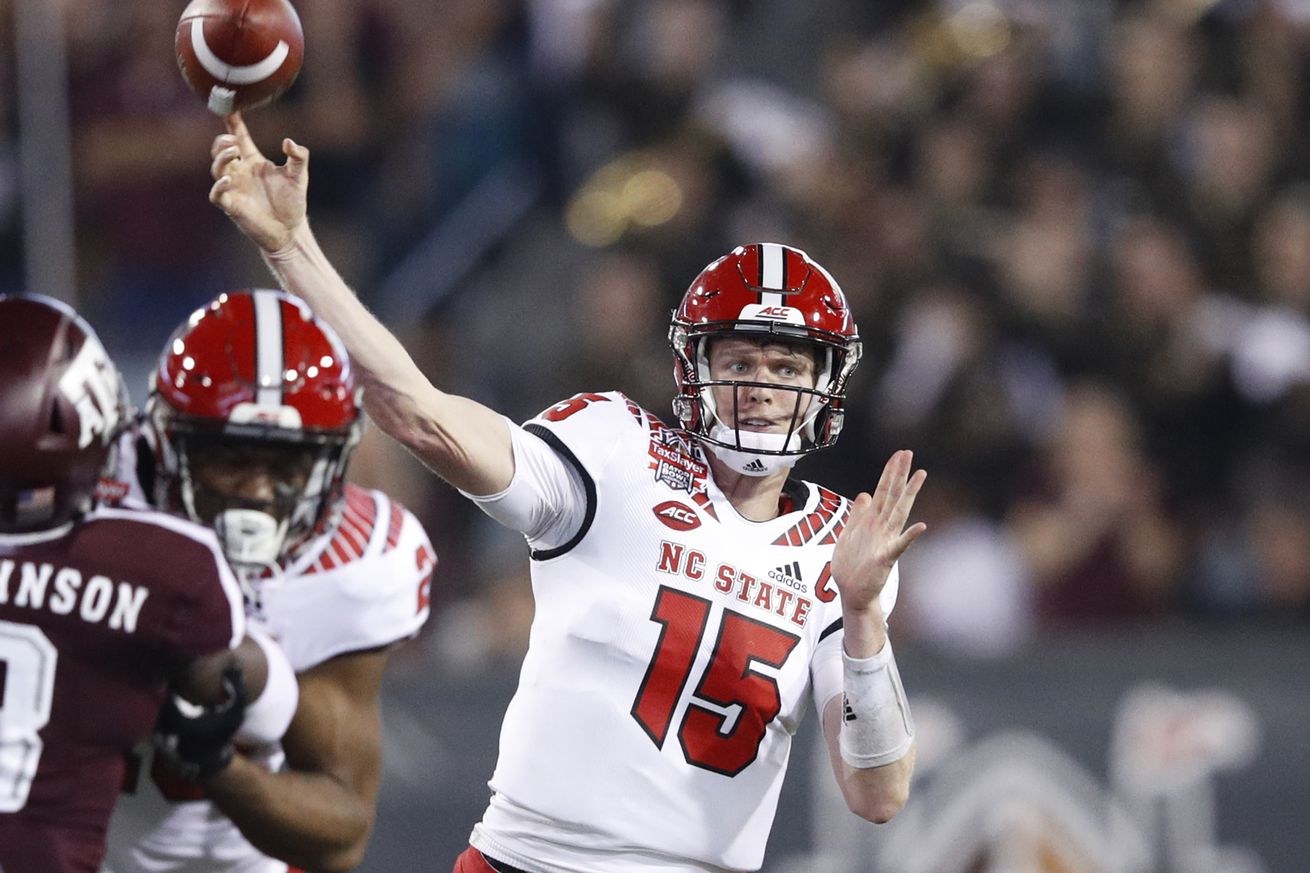 Finley’s solid decision making skills as a passer should benefit the Patriots at least in the capacity of Brady’s potentially final backup.

The Patriots are certainly on the look for a QB who can stick on the roster for a while, either as a starter or as a backup. Tom Brady and Brian Hoyer are both scheduled to hit unrestricted free agency when the season ends barring an extension for either or both. There isn’t a QB who I’d grade with a starter or future starter role that will be on the board when the Patriots pick in the first round, so I think they’ll wait until Round 3 before getting their guy.

Reasons Why the Patriots Would Draft Him

From a system fit perspective, Finley at worst has a floor of a backup QB in Brady’s final years. His short area decision making skills and quick release make sense especially in an offense where they try to break down the defense pre-snap with motion, personnel, and formations. If he can process the game even 75% as fast as Brady has been able to the last 7-8 years, he’ll do fine as either a future starter or long-time backup.

Reasons Why the Patriots Won’t Draft Him

It could be a case where the Patriots aren’t interested in drafting a quarterback. Adding Finley means the team will likely carry 3 QBs on the 53-man roster, which Bill Belichick isn’t opposed to doing. Given that Finley played in a pro style offense in his 3 seasons at N.C. State, the Patriots wouldn’t be the only team interested in drafting him in the capacity of at least a capable backup with a small chance of developing into a starter with a good QB Coach and Offensive Coordinator.

Who He Needs to Beat Out: Danny Etling and/or Brian Hoyer

Finley would spend his rookie season mostly studying the playbook, adding 10 pounds of muscle in the weight room, and getting reps in preseason as the #3 QB. The team is already carrying Brady, Hoyer, and Etling on the QB depth chart although taking Finley in the draft probably spells the end for Etling in a Patriots uniform. He would likely be inactive for all 16 games during the regular season as the Patriots never carry three active QBs into a game when Brady is mostly healthy.

Finley would have to prove he’s capable of being a longer term answer at the backup QB position than Hoyer as a rookie, otherwise he’s pretty much gone in Year 2. Tom Brady has expressed interest in wanting to play well into his 40s, so a starting opportunity might not exist for a few years. In the meantime, should Finley prove to be a capable backup that is a position that’s figured out for the next 3-4 years while the Patriots go to work on finding the potential Brady heir.

Depending on how you frame the argument, he is both a Future Starter (4) or a Backup (2) so I took the average. In the Patriots’ case, he’s closer to a 2 than a 4 unless he comes much better than advertised.

Given the team has 3 picks in the 3rd round (DET 3rd plus 2 comp picks), that seems to be the sweet spot for the Patriots to take a potential backup QB. Historically, the Patriots have drafted backups in the 3rd round (Kevin O’Connell, Ryan Mallett, Jacoby Brissett), so in a draft where there aren’t many QBs with starting potential they could take a high floor backup with low odds of developing into a starter. If he’s anything like Brady, perhaps the odds I’ve giving him are too low.