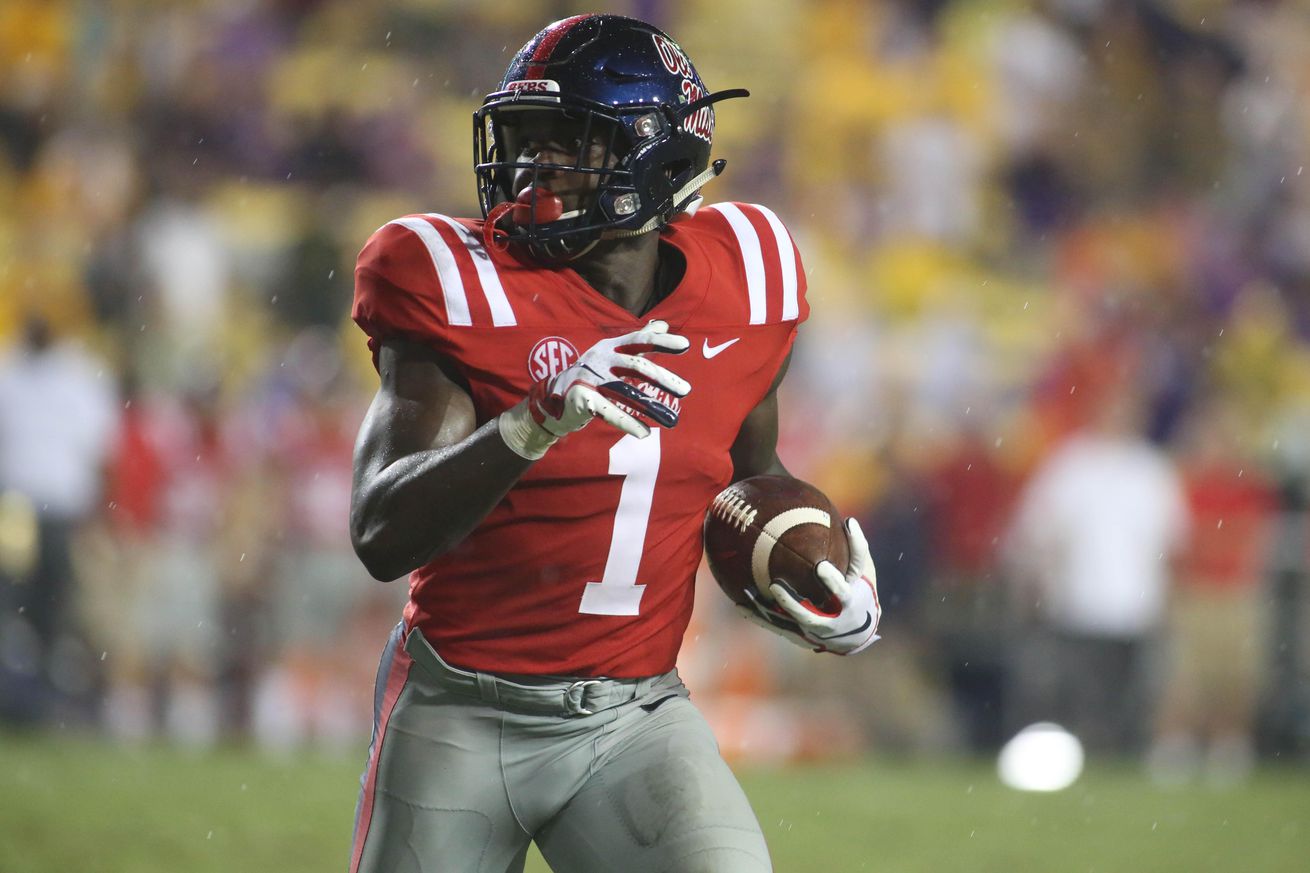 A.J. Brown is the most complete receiver in the draft and someone the Patriots have to consider adding to their mostly unproven receiver room.

The Patriots’ wide receiver room is a bit unsettled, with Julian Edelman and Phillip Dorsett returning from last year’s group. The Patriots control Josh Gordon’s rights, as he recently signed his restricted free agent tender. However, Gordon becoming a significant contributor down the stretch and into the postseason is not a bet the Patriots should make despite his otherwise solid production (40/720/3) when available last season.

The team was linked to Adam Humphries, who signed with the Tennessee Titans despite the Patriots making a last ditch effort to pry him away from there. Instead they ended up taking the spaghetti method by picking up Maurice Harris from Washington, Bruce Ellington from Detroit, and Demaryius Thomas from Houston. Two of the three players have links to former Belichick assistants while the Patriots have seen Harris multiple times in preseason.

There’s a good chance one of the three players listed could turn out to be a contributor, but they’re all 1-year guys. The Patriots could afford to have some young and cost-controlled talent at the position.

Why the Patriots Would Draft Him

Brown literally checks off every box that I like with a receiver in the Patriots offense. Quick-twitch athlete, outside/slot versatility, physical run blocker, and excellent body control. The Patriots typically don’t draft WRs in Round 1, but Brown is a plug and play starter for the team outside or even in the slot to get him and Edelman on the field at the same time. His skill set is perfect for the Patriots offense as a quick-hitting, ball control passing attack that complements a smash-mouth running game.

Why the Patriots Would Not Draft Him

Two reasons: he’s not available or someone who the Patriots love more in the draft fell to them. The highest the Patriots went for a WR pick was 36th overall in the 2006 draft when they traded up to select Chad Jackson. Perhaps getting burned on multiple receiver picks in the Top 100 makes the Patriots less eager to draft and develop a receiver prospect vs. the spaghetti method with NFL veterans. Brown’s game is very similar to Julian Edelman and Anquan Boldin, quick-twitch and physical receivers that didn’t wow you with speed but at the end of the day put up big numbers and beat you.

Who He Has to Beat Out: Maurice Harris, Bruce Ellington, Demaryius Thomas

Brown’s roster spot would not be in jeopardy, but he does have to beat those guys out for a role.

Brown would at worst be the #3 receiver on the depth chart, assuming no injuries here. While there is some projection going from the SEC to the NFL in terms of the speed of the game and athleticism of the opponent, Brown is advanced in regards the nuances to the position compared to other prospects. I wouldn’t be surprised if he sets Patriots rookie records for catches, yards, TDs, etc. when all is said and done.

Brown is your future #1 receiver and the Patriots would line him up in differing areas of their formations to create match-up problems like they do now with Edelman. If they find a weakness in the opposing secondary, Brown is the guy to attack it. His strong run blocking skills will also keep him on the field as a major contributor (~95% snaps on offense) and his size and strength makes him an ideal guy to motion to the point of attack and crack a linebacker in the hole.

If Brown is available at 32, something that I consider about less than 5% chance of happening due to other teams needing a receiver, the Patriots have to consider it. Brown is as close to a complete receiver as the Patriots will likely ever be able to pick up in the draft although given the positional value they may look elsewhere if another similarly graded prospect drops. If no other prospect is available, 5 years of cost control for a receiver who can impact every down on offense is worth having even if the Patriots haven’t historically made a first round selection at the position.