Cam Newton is gearing up for another run at free agency.

Newton, of course, spent the 2020 campaign with the New England Patriots after agreeing to a one-year deal in July. The veteran quarterback, however, didn’t have overwhelming success as the Patriots missed the playoffs for the first time since 2008.

And now, while nothing has been made official, it seems like Newton and the Patriots are bound for a split.

It prompts the question: Where will Newton land next?

Pro Football Focus predicted potential landing spots for nine different quarterbacks. The analytics-driven outlet, rather surprisingly, predicted that Newton could sign a one-year contract worth $5 million with the Cincinnati Bengals. 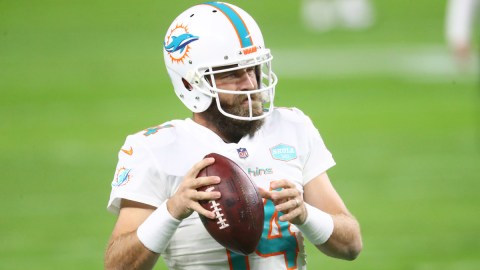 “Outside of Newton’s 2015 MVP season in which he graded at 86.5 overall, he’s been a mid-level passer with the added upside of what he brings to the run game. Newton is a monster in short yardage, and an effective offense can be built around that skillset. However, the 2015 season is far more of an outlier than the norm at this point, and Newton’s accuracy and decision making limit his potential in the passing game. He has two top-10 finishes in PFF quarterback rankings in his 10 years in the league.

He may not be the MVP-caliber quarterback he once was, but he’s made it clear he still deserves to play in this league. There have been some rough outings, but given his circumstances (new team, truncated offseason, worst WR/TE group in the NFL, contracting COVID-19) he has also performed admirably for stretches of games.“

Newton landing in Cincinnati would be a bit bizarre seeing how the Bengals spent the No. 1 pick in the 2020 NFL Draft on quarterback Joe Burrow. Burrow, as you may recall, did suffer a season-ending ACL injury in November, but he explained Tuesday that his intentions are to be ready for Week 1.

Newton, on the other hand, expressed how he thinks he deserves to be a starting quarterback in the NFL. Unless Burrow’s recovery hits an unforeseen snag, though, it doesn’t feel like that role would be open in Cincinnati.