The Patriots have inked defensive tackle Christian Barmore, per a club announcement. As the No. 38 overall pick, Barmore will earn $8.5MM on his four-year contract. 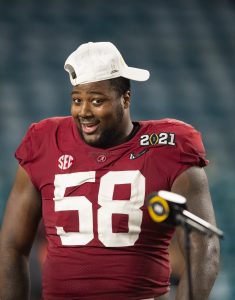 Barmore skipped two years of Alabama eligibility to go pro, joining fellow underclassmen Jaylen Waddle, Patrick Surtain II, and Mac Jones in the 2021 NFL Draft pool. After taking Jones in Round 1, the Pats shipped pick Nos. 46, 122 and 139 to the Bengals for No. 38, where they grabbed Barmore.

Barmore, the defensive MVP of the National Championship Game, notched 37 tackles, eight sacks, and three forced fumbles last year. He finished 2020 as Pro Football Focus’ top-ranked interior lineman in college and seemed to be on track for the first round. For one reason or another, he slipped, leading him to Bill Belichick & Co. in the second round.

With Barmore in the fold, the Patriots now have their entire 2021 draft class signed. Here’s the full breakdown: