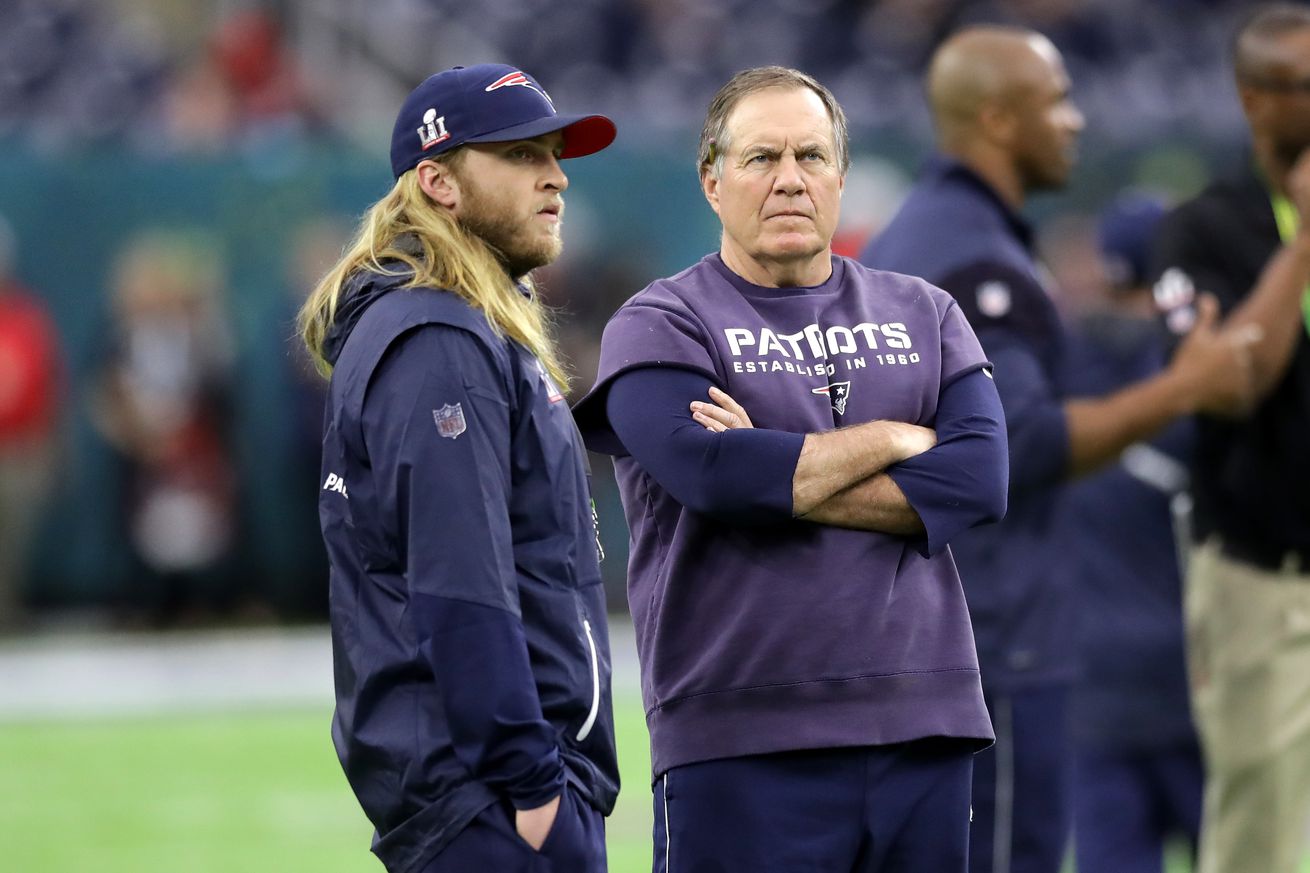 Who will watch the players?

The New England Patriots are finishing up their first week of conditioning for the 2019 season, but there remains a big gap on the roster.

Who the heck are the coaches?

“They haven’t told us, so we’re just kind of just working out right now,” cornerback Stephon Gilmore said, according to MassLive. “[We’ve had] little meetings, but nothing that we know yet.”

When you look at the Patriots website, there is still just one defensive coach listed: safeties coach Steve Belichick, who is entering his fourth season in the role and eighth season as a defensive coach.

The offensive side isn’t much better, with old timers offensive coordinator Josh McDaniels, offensive line coach Dante Scarnecchia, and running backs coach Ivan Fears- all of whom were with the Patriots back in 2001- and youngster tight ends coach Nick Caley.

So who is coaching these players? Apparently the players themselves, according to Gilmore.

“We’ve got a lot of good players in the secondary, so we all coach each other up, and we all make each other better,” Gilmore said. “We push each other, so no matter who’s coaching us, they’re going to put us in the position to make plays.”

Outside of the special teams unit, with Joe Judge and Cameron Achord working together again, and the weight room, with Moses Cabrera and Deron Mayo, there are plenty of questions. But there’s one definitive answer at the most important position of head coach.

“We’ve got a great coach,” Gilmore said, referencing head coach Bill Belichick. “It’s the National Football League. People go and come, so (you’ve) got to be able to adjust. I’m pretty sure the coaches we have will put us in the best position to make plays.”

So let’s take a look at the vacancies and barring the Patriots spending one of their draft picks on a coach (I’m kidding), let’s make some projections.

Shockingly, the Patriots don’t appear to have anyone on the coaching roster prepared to take over for the position. But one of the benefits of having consistency in the top ranks means that offensive coordinator Josh McDaniels could be a little more involved in the role, as could director of player personnel Nick Caserio, who was wide receiver coach for the Patriots for a pretty good season in 2007.

A dark horse candidate would be DeMarcus Covington, who played wide receiver in college, but he’s spent far more time coaching on the defensive side of the ball.

The Patriots hired Mick Lombardi, son of former team executive Michael Lombardi, to the coaching staff this offseason and he makes sense in this role. Lombardi previously worked as an assistant in 2011-12 before joining the San Francisco 49ers and New York Jets, ultimately serving as an assistant quarterbacks coach for the past two seasons. He makes plenty of sense in this role.

This position is interesting because there isn’t a current vacancy, but the Patriots have to be prepared for Dante Scarnecchia’s eventual retirement. The team hired Carmen Bricillo from Youngstown State this offseason to be the assistant offensive line coach, so there isn’t a major question mark for the job itself.

The real question is what the team decides to do with assistant coach Cole Popovich, who is entering his 5th year with the team and who has spent the majority of his time learning from Scarnecchia. Will the team have two offensive line assistants? Will Scarnecchia retire soon? Or will Popovich, the lifetime offensive lineman and line coach have to find a new job?

Will the Patriots even have one? New England didn’t have an official defensive coordinator last season, although Brian Flores owned the responsibilities. There are only three real options at this point:

1) Bret Bielema, the former head coach of the Wisconsin Badgers and Arkansas Razorbacks who is entering his second season with the team. He expected to be the Patriots defensive coordinator prior to the hiring of Greg Schiano, and perhaps now he’ll actually get the title. More on him in a bit.

2) Bob Fraser was hired as a Schiano assistant roughly one day before Schiano resigned. Still, Fraser has experience as a defensive coordinator and could lead the same defense that the Patriots planned on having under Schiano.

3) Belichick will do it himself. I’m leaning towards this options.

I expect Bret Bielema to be the defensive line coach with Joe Kim as his assistant, even without an official title. I would also expect DeMarcus Covington, who is entering his third season with the team, to help out with the entire defensive front seven because he has prior experience coaching defensive linemen and linebackers.

Bielema could ultimately call the defensive plays from this position, just like how Flores did it as a linebackers coach. In this scenario, I would expect Bielema to hold this job for 2019 and get promoted to official defensive coordinator in 2020, with Covington becoming the defensive line coach in 2020.

Former linebacker Jerod Mayo joined the team and reportedly has the position, although it wouldn’t be surprising to see him with a defensive coaching assistant title at least for a season. Fraser, who has many years of experience as a linebackers coach, could hold an advisory and mentorship role for Mayo as Mayo learns his footing as a coach.

Covington could also chip in for this role, too, as he helped coach the position for the Patriots in 2019 as Flores was focusing more on the full defense.

There is only one real option for this vacancy, with Mike Pellegrino entering his fifth season coaching with the Patriots. Pellegrino helped coach the cornerbacks last season and is a natural fit to take over the job.

This leaves just one coaching assistant remaining in Brian Belichick, who is entering his third year as a coach and fourth with the team. His older brother Steve had to serve as an assistant for four seasons prior to getting a promotion and I would expect Brian to follow the same trajectory.

I would also be curious to see if Brian flips to the offensive side of the ball to help out with the wide receivers, setting up an opportunity for him to become the wide receivers coach in 2020. That would make some sense and would allow Bill Belichick to have a son on both sides of the ball.

All of this remains to be seen. We might not find out until offseason training activities begin in May.