The schedule’s out, the weather’s warm, and we’ve got a brand-spanking-new edition of the NESN.com New England Patriots mailbag for you to enjoy on this beautiful Friday morning.

@JimGilhooly1957
Who will be the third and/or fourth TE the team keeps?
That’ll be a battle between Devin Asiasi, Dalton Keene, newcomer Matt Sokol and any other tight ends the Patriots may add over the next few months. And so far, none of those three have provided much reason for optimism.

Asiasi has two career catches and sat out almost all of last season as a healthy scratch, appearing in just one game. Keene, drafted 10 spots after Asiasi in Round 3 of the 2020 NFL Draft, has three career catches and didn’t play at all in 2021, spending the entire season on injured reserve. Sokol, whom the Patriots claimed off waivers from Detroit this week, has two career appearances and zero receptions.

Since the Patriots’ third tight end (with Hunter Henry and Jonnu Smith occupying the top two spots) is unlikely to contribute much offensively anyway, this spot should go to a player who can make an impact on special teams. In theory, that’s Keene, who’s more athletic than his draft mate Asiasi. Keene also may be able to contribute in an H-back-type role — his primary position at Virginia Tech — as the Patriots transition away from the traditional fullback. But it’s unclear where he’s at physically after missing all of last season and being limited to six games as a rookie.

The more important question here is whether Smith can become the player New England thought it was getting when they gave him a four-year, $50 million contract last offseason. Smith started off well enough (nine catches on 10 targets in his first two games) but was a non-factor for most of the season, finishing with just 28 catches for 249 yards and one touchdown while grading out as one of the NFL’s worst run-blocking tight ends.

There were some small silver linings for Smith — most notably his yards-after-catch average, which ranked first among tight ends and third overall, per NFL Next Gen Stats — and the Patriots look poised to feature him more prominently this season, leaning more into 12 personnel (two tight ends) after surprisingly not straying from their 12 personnel preference in 2021.

Team owner Robert Kraft said the Patriots are “making changes” aimed at energizing some of their disappointing ’21 free agents. Though he didn’t mention them by name, Kraft clearly was referring to Smith and wide receiver Nelson Agholor, who also underperformed in his first Patriots season (and is fully expecting a Year 2 resurgence).

“We have a lot of talent that hasn’t been tapped into yet, in my opinion,” Kraft told The Athletic’s Jeff Howe in March.

Will those changes trigger the type of production we saw from Smith during his Tennessee Titans tenure? We shall see.

@dnoonan222
With Bolden & King gone, who steps in with Slater/Bethel/Davis on the core special teams units?
I’d include Gunner Olszewski (212 special teams snaps), Jakob Johnson (191) and Chase Winovich (161) on that list of departed kicking-game contributors, too. There will be plenty of reps and roster spots up for grabs on special teams this summer.

Candidates to fill those spots? Director of player personnel Matt Groh said most of the Patriots’ rookies will be expected to play on fourth down, so keep an eye on players like wide receiver Tyquan Thornton, cornerbacks Marcus Jones and Jack Jones and running backs Pierre Strong and Kevin Harris.

Teams also is a great avenue for undrafted players to snag roster spots. One to watch this year: Brenden Schooler, who played safety and wide receiver at Texas and Oregon but profiles as a potential weapon in kick/punt coverage. FCS cornerback Devin Hafford (Tarleton State) is on my radar there, too. 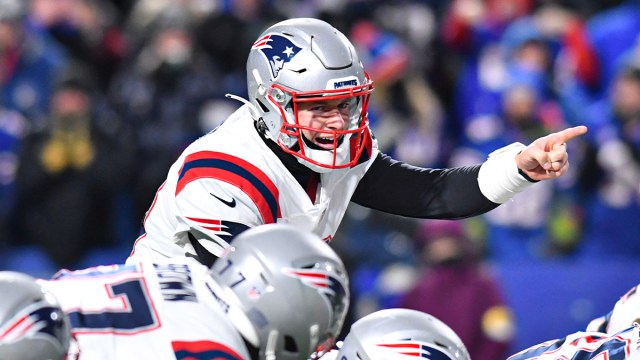 @JimFKing1
Why didn’t we bring back Trey Flowers? Is it still possible?
Still possible! Flowers has yet to sign anywhere since the Lions released him in March, and I still think he’d make a lot of sense for New England. He was great in his first stint with New England, and the Patriots haven’t done much to improve their defensive line this offseason outside of drafting Division-II product Sam Roberts in the sixth round and signing a couple of UDFAs. They could use a player with Flowers’ versatility and pass-rushing prowess, and he’d probably come cheap.

@ALbits__
Is Pierre Strong the next/replacement for James White?
That seems to be the most likely career path for the fourth-round draft pick. I spoke with East-West Shrine Bowl director Eric Galko last week, and he views Strong as a White-esque passing-down back who also can provide big-play potential as a change-of-pace back.

Speed is Strong’s most notable attribute — he ran a blazing 4.37-second 40-yard dash at the combine — but Galko also raved about his pass-blocking ability. That’s a necessary skill for young Patriots ball-carriers to grasp if they hope to earn playing time.

“I think his two best skill sets right now for the NFL are his pass-blocking and ability as an out-of-the-backfield route-runner and explosive player, and then as an interior zone-blocking runner who will deliver on big plays,” Galko told NESN.com. “So I think right now, NFL teams maybe don’t view him as this complete, three-down, 25(-carry) workhorse-type running back, but he is one of, if not the best pass-blocking running backs in this entire class.”

He added: “He can be very explosive. I would say from a Patriots perspective, yeah, I think he starts working a lot more on those third-down roles, maybe as more of a pass-blocking option to James White’s pass-catching option, and then slowly eats into that. But don’t be surprised if they also work him heavily in the rotation. … You bring in Pierre Strong for a quick inside-zone play, it could be a 60-yard run.”

I have a deeper film review on Strong coming out in the next few days, so stay tuned for that. And be sure to check out the ones Dakota Randall and I already have published on Cole Strange, Thornton, Marcus Jones and Jack Jones.

@JosephBuqueNFL
Who are the more likely “surprise cuts” that you could see happening this summer?
I mentioned Jonathan Jones as a surprise cut candidate in last week’s mailbag, simply because the Patriots drafted two players who initially profile as slot cornerbacks (the two rookie Joneses) and New England can save $5.7 million against the cap by releasing or trading him.

I’d put White on that list, as well, since it’s unclear how he’ll look physically after season-ending hip surgery and the ongoing months-long recovery that followed. White, who suffered his injury in Week 3 of last season, still isn’t back to 100 percent and reportedly will miss at least the start of voluntary offseason workouts.

Also keep an eye on Agholor. Cutting him wouldn’t be ideal from a financial standpoint ($4.9 million in salary cap space created with $10 million in dead money), but if Thornton catches on quickly and the Patriots can find a trade partner for the veteran wideout, they’d save $9.9 million against the cap with $5 million left behind in dead money.

@PatsFanKev
Who do you think are the captains of the Patriots for 2022?
A little too early to predict the full list, but I would be surprised if Mac Jones isn’t a team captain this season. Taking on a more active leadership role was among his offseason priorities, and teammates have raved about his progress in that area.

Devin McCourty, David Andrews and Matthew Slater will be shoo-ins, too, as will White if he’s on the roster. Perhaps we’ll see Ja’Whaun Bentley, a captain in 2020, reclaim that role now that Dont’a Hightower is (seemingly) gone.

Why Fast Start Could Be Especially Important For Patriots This Season