The Patriots hosted wide receiver Demaryius Thomas and running back T.J. Yeldon on Wednesday, according to Field Yates of ESPN.com (Twitter link). 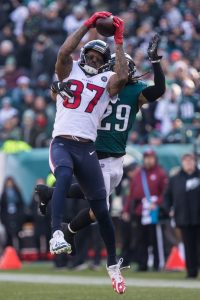 New England would make sense as a potential landing spot for Thomas on a number of levels. The 31-year-old pass-catcher was originally drafted by then-Broncos head coach Josh McDaniels, who is now the Patriots’ offensive coordinator. The Pats reportedly expressed interest in acquiring Thomas from Denver before he was dealt to Houston, and New England needs offensive help given the loss of Rob Gronkowski and Cordarrelle Patterson, the potential loss of free agent Chris Hogan, and the uncertain status of Josh Gordon.

While Thomas would give the Patriots another option on their wide receiver depth chart, he’s certainly not the threat he once was. While splitting time between Denver and Houston in 2018, Thomas posted only 59 receptions for 677 yards, his lowest totals since 2011 (before he was a full-time starter).

Thomas tore his Achilles in December, and it’s not clear when he’ll be able to return to the field. Additionally, he was taken into police custody after being involved in a car accident in February. There’s been no new information on Thomas’ legal status recently, but each of these factors will likely make him an affordable potential signing for the Patriots.

Like Thomas, Yeldon hasn’t drawn any other known free agent interest since the market opened in mid-March. After starting for the Jaguars during his first two years in the NFL, Yeldon became a backup after Jacksonville drafted Leonard Fournette in 2017. Yeldon has averaged only four yards per carry since entering the league, but he’s been a consistent weapon in the passing game, averaging about 43 receptions per season. Football Outsiders ranked him among its top-20 most efficient pass-catching running backs in 2018.