Patriots cornerback Jonathan Jones has signed his second-round restricted free agent tender, according to Mike Reiss of ESPN.com (Twitter link). Jones will now be paid $3.095MM for the 2019 season. 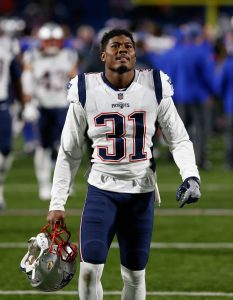 Jones becomes one of several second-round RFAs to ink his tender today, joining Ravens linebacker Patrick Onwuasor, Colts receiver Chester Rogers, and Eagles quarterback Nate Sudfeld. Rival clubs could have signed Jones to an offer sheet and sacrificed a second-round pick in order to land him, but Jones will instead sign his tender on the day New England begins its offseason workout program.

A former undrafted free agent, Jones hasn’t missed a single game during his three-year run with the Patriots. Over the past two seasons, he’s contributed on defense, playing between 40% and 50% of New England’s defensive plays in each year. Pro Football Focus graded Jones as the No. 73 cornerback among 112 qualifiers, while Football Outsiders charted him as below average in both yards per pass and success rate.