Stephen Gostkowski, one of the league’s most prolific kickers, is still unsigned as we head into the fourth week of the new league year, and there has not been any chatter about him since March 21. 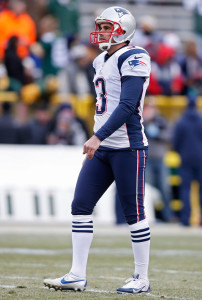 On March 21, we learned that the Patriots and Gostkowski, who has served as the team’s place kicker since 2006, were working on a new deal. But nothing has happened yet, and despite rumored interest from other clubs, it is unclear who those other teams might be and how interested they are in Gostkowski’s services.

Mike Reiss of ESPN.com says the Patriots are simply waiting on a “market correction” after they signed Gostkowski to a four-year deal in 2015 that included an AAV of $4.3MM, which would still rank second among kickers (behind only Robbie Gould‘s one-year franchise tender of just under $5MM). New England apparently believes it overpaid, and the club is not inclined to do so again.

Reiss expects Gostkowski’s status with the Pats to be solidified one way or another by the draft, which begins on April 25. But the ESPN scribe does not offer any indication as to whether he believes the two sides will re-up, so while it would still be surprising to see Gostkowski kicking for another club in 2019, it certainly appears to be a possibility.