Patriots WR Josh Gordon has signed his original round RFA tender, as ESPN’s Field Yates tweets. Although Gordon is uncertain to play in 2019, if he does suit up, it will be for the Pats. 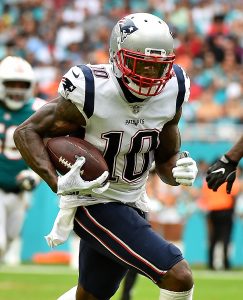 The last we heard from Gordon, he was considering applying for reinstatement by the league this spring. Gordon was traded from the Browns to the Patriots last season, and he had some initial success before suddenly stepping away from the team. Shortly thereafter, it was announced that the league was suspending him indefinitely for violating the terms of his previous reinstatement.

Another report also said Gordon could be back by training camp, although that’s obviously far from a guarantee. Gordon has always been ultra-talented, but he hasn’t been able to stay on the field. In 11 games with the Patriots last year, he caught 40 passes fro 720 yards and three touchdowns.