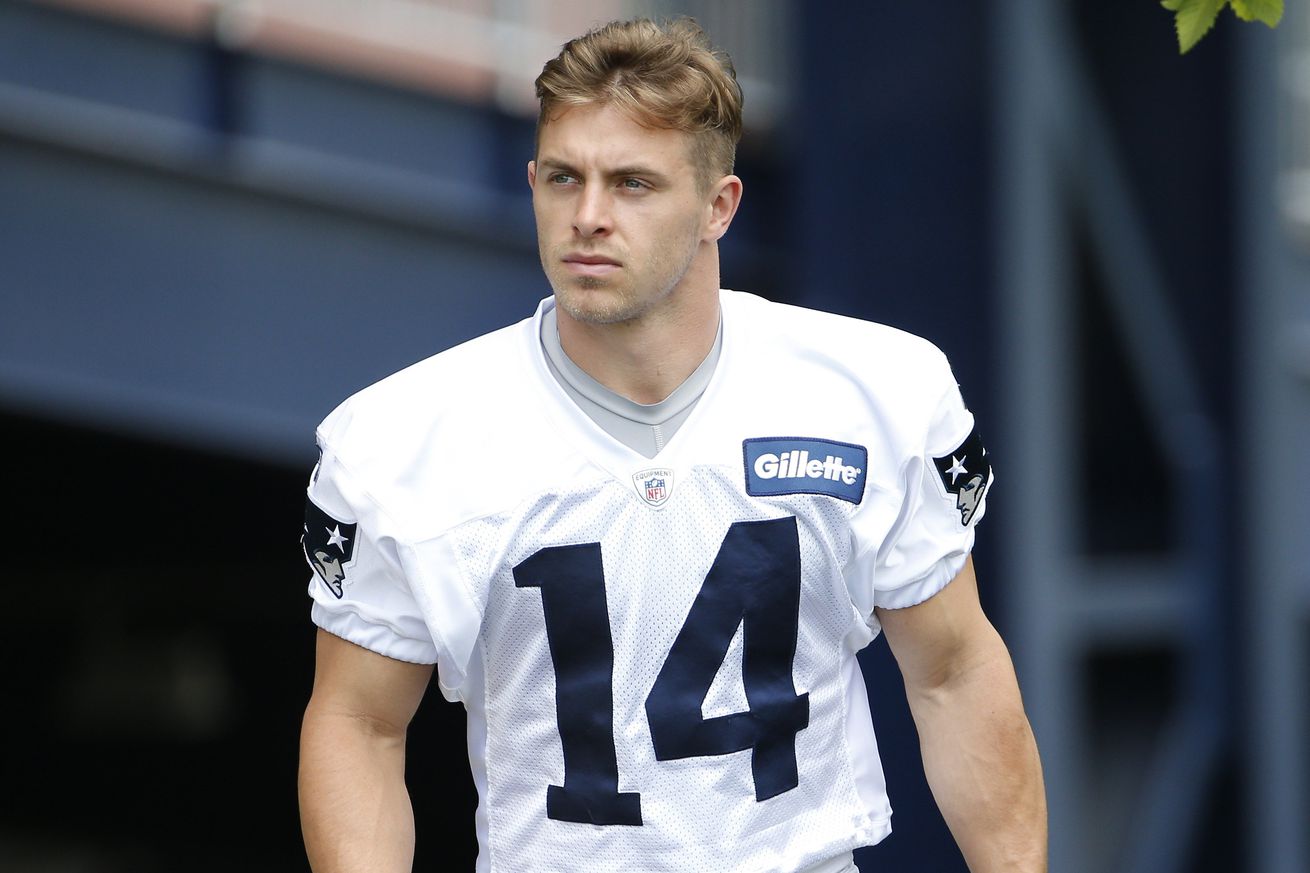 Berrios is entering year two with plenty of questions — and with a lot of potential.

No position on the New England Patriots’ roster saw as much turnover over the last two years as wide receiver; gone are the days of Brandin Cooks, Chris Hogan, Danny Amendola and Malcolm Mitchell. As a result, Julian Edelman and Phillip Dorsett remain as the two most experienced true wideouts in the team’s system. In fact, only one other player on the position’s depth chart has already been with the club at this time last year: Braxton Berrios.

A sixth-round draft pick out of Miami in 2018, Berrios spent virtually all of his rookie campaign on injured reserve. Entering his second season in the NFL, however, he projects to see considerable practice reps and preseason playing time as a slot receiver and potential punt return option. The comparisons to the aforementioned Amendola therefore comes only naturally given Berrios’ skill set.

And when looking at the film, they actually hold up.

After all, Berrios brings many of the same traits to the table that made Amendola an important rotational wide receiver during his five seasons in New England from 2013 through 2017: from his ability to perform under pressure to his technical approach to the game. Add it all up, and you get a player who might be able to carve out a role on the Patriots’ roster this year.

Like Amendola, Berrios was not the flashiest of athletes entering the league. A look at his profile, via MockDraftable, shows this:

While Berrios scored well in categories such as the 3-cone drill, the 40-yard dash, and the vertical jump, his size — he was measured at a bit below 5-foot-9 and at 184 pounds during the scouting combine last spring — and strength were on the opposite end of the spectrum. However, the Miami product consistently knew how to make the most out of his skills as the following clip from his game against Florida State shows:

Berrios maximizes his physical abilities by doing little things right to get open.

Stacks the CB by rocking o/s to open his hips, then snapping back i/s and chopping to avoid contact.

Rare drop you can’t really blame him for, but shows his trademark willingness to lay out pic.twitter.com/GGEr4us9LO

Lining up in the left-side slot, Berrios does the little things to get open against man-to-man coverage: he stacks the defender by first rocking outside to open his hips before snapping back in and using a chop to avoid contact. The moves are subtle but they do allow him to create separation down the field. Even though the result of the play ultimately is an incomplete pass, it does show his savvy moving skills at the line of scrimmage.

His feel for attacking defenders made him a reliable contributor for the Hurricanes, but his running skills also played a role in that:

Berrios isn’t fast, but he gets to top speed quickly as you can see after the catch, which is key for beating guys in close quarters.

Aligning on the right side of the formation on this play, Berrios accelerates quickly after receiving the short pass to get to around corner and gain eight yards on the play. It may not be the most spectacular play in the young receiver’s catalogue, but it shows that his speed can be dangerous to opposing teams both on offense and in the kicking game (more on that later).

As evidenced by his 3-cone drill — he ran a 6.72 at his pro day that would have ranked him fifth among wide receivers in last year’s combine — Berrios has the quickness to run a lot of the routes the Patriots draw up for their smaller receivers. Florida State experienced this on the following whip route:

The route immortalized by Julian Edelman in Super Bowl XLIX. Stays on his feet through the tackle attempt and keeps his balance for another big third down conversation pic.twitter.com/zzHN1MKqlZ

Immortalized by Julian Edelman in Super Bowl 49 against the Seattle Seahawks, Berrios also shows an ability to successfully perform the stop-and-go route on this play. Fighting through the cornerback’s contact at the top of the route, he is able to get towards the boundary without much hesitation. Once in the open field, Berrios gets around the edge and to the first-down marker by stepping through a tackle attempt.

As noted above, he may not be the most spectacular athlete, but Berrios has the skill set to function well in the NFL and as a primary slot option within the Patriots’ offensive system.

Berrios’ football IQ is closely tied to his athletic profile and how he takes advantage of it: he knows how to attack coverages and win one-on-one matchups against defensive backs. The following play is further illustration of that as it shows the wide receiver displaying strong spatial awareness which in turn allows him to avoid big collisions, spin away from defenders, and find the marker on must-have downs or in goal-line situations.

Berrios has strong spatial awareness which helps him avoid big collisions and regularly spin away from incoming defenders. Not quite as elusive as previous Patriots slot guys, but fights hard after contact.

These abilities produced many of Amendola’s biggest plays pic.twitter.com/OM25RNbBsD

Again lining up in the left-side slot, Berrios runs a quick in-breaking route following a free release at the line. After receiving the football, he turns around quickly and recognizes the lane he needs to target against the defenders surrounding him. On top of it all, he never loses his balance which allows him to gain two additional yards after the reception.

This ability to read and react served Berrios well during his collegiate career. It also is something that Amendola showcased on a regular basis in New England, as recognized by offensive coordinator Josh McDaniels after the team’s victory in Super Bowl 51: “We feel like Danny is the best trash runner and catcher that we’ve got. You’re going to have to catch it with a lot of bodies close to you, you’re going to have to turn your head and shoulders […] real quick, and just dive through a brick wall if you have to.”

This quote by McDaniels is a fitting bridge to Berrios’ skills as a pass-catcher, because he also displayed some Amendola-esque abilities of making tough catches in college. The following play is a good example of that, as the young wideout is able to adjust to the ball and come away with the reception (one ultimately taken back because of an offensive pass interference penalty) despite being tightly covered:

Gets too aggressive trying to shed the CB downfield, but the ability to adjust to backshoulder passes through contact, particularly downfield where he had an 80% catch rate in 2017, is all over Berrios’ tape pic.twitter.com/LpxqZ3zM5M

Even though he gets too aggressive on the top of his route in trying to shed the cornerback, Berrios shows some excellent concentration to come away with the reception on the deep ball right after disengaging from the defender. This ability to haul in the deep pass is a staple of the 23-year-old’s skill set: in his final year at Miami in 2017, he had downfield catch rate of 80% — an impressive number for a player of his size and athletic profile.

The following play is further illustration of this:

Berrios stacks with a head fake and stutter step that disrupt the DBs drop. Secures and shields the backshoulder pass for a 21 yard TD pic.twitter.com/s6zmvW5mV4

Berrios again aligns in the left-side slot on this 21-yard touchdown reception, running a corner route versus man-to-man coverage. His route-running skills are on display on this play — he uses a head fake and stutter step to disrupt the cornerback — as is his ability to adjust to the pass on the back-shoulder throw and hold onto the football even with a defender draped all over him.

Danny Amendola, for comparison, made a living in New England out of seemingly catching everything thrown his way: no matter the degree of difficulty, the former undrafted rookie was as safe a bet to make the catch as any on the Patriots’ roster. As the two clips above show, Berrios is somewhat similar in this regard. That being said, his ability to repeat his though catches against superior competition will determine his success at the next level.

As noted above, Berrios’ short-area speed makes him a threat in the kicking game as well, and the following punt return shows it:

Berrios finding space on the sideline and ripping off a big punt return has Amendola written all over it pic.twitter.com/cgR1qUQxXu

After catching the kick, Berrios immediately heads towards the perimeter to follow his blocking. He then kicks into his second gear to out-run one of Florida State’s defenders to the edge and subsequently down the field. Comparing this return to Amendola, who ran back 94 punts during his Patriots career, we can see that Berrios’ abilities to find space and accelerate to get around potential tacklers is pretty similar: the ex-Patriots’ almost-touchdown against the New York Giants in 2015, for example, resembles the youngster’s return above.

The Patriots certainly seem to agree, as they used Berrios on punt returns before his season-ending injury. He only saw limited action, however: in his lone preseason game, the then-rookie fielded just three punts, with two being caught fairly and one returned for no gain. Nevertheless, it should be expected that he will be given additional chances this summer.

All in all, Braxton Berrios has the tools to become the Patriots’ next Danny Amendola. All he needs to do is take advantage of his skill set, intelligence and experience in the system and build a rapport with quarterback Tom Brady. The latter will probably be the hardest part, as only a select few players have earned the future Hall of Famer’s trust in the same fashion as Amendola has. If Berrios can join that elite club, however, he should find his way on New England’s roster this season.