Homer’s Iliad tells the story of mythic Greek soldiers like Achilles and Odysseus sieging the city of Troy in search of kleos—Greek for “renown” or “glory.” Homer’s exact birthplace is of scholarly debate, but some place it on the island of Chios. Now, roughly 29 centuries later, this same island would be a key site in entrepreneur Effie Panagopoulos’ own search for kleos.

Chios’ main claim to fame, other than Homer, is the production of mastiha, a type of resin gum derived from an eponymous tree and known as the “tears of Chios.” The European Union recognizes the superfood as a product of Protected Designation of Origin (PDO), which can only be cultivated on Chios.

Panagopoulos, BC ’99, said she grew up in a Greek immigrant family in Boston and enjoyed mastiha by the spoonful as a dessert in her youth. In the summer of 2008, Panagopoulos had a fateful encounter with the flavor at a beach bar in Mykonos.

“I had a Proustian rush,” Panagopoulos said. “I tasted this alcohol that everyone’s doing shots of—all these American tourists. I try it and I’m like, ‘Oh my God, I know this flavor profile. This is delicious. Why the hell don’t we have this in the United States?’”

After a winding career path following her graduation from Boston College, Panagopoulos had finally found her calling in life—to bring the distinctively Greek mastiha liqueur to the American consumer.

“When I had this eureka moment, I literally felt—and I feel still today—that this is my fate, that I am meant to do this,” Panagopoulos said. “I’ve never felt so strongly about this in my life.”

Panagopoulos graduated from Boston Latin School in 1995, where she studied Latin, Greek, and French. Then, as an undergraduate at BC, Panagopoulos said she took a theology course with Rev. Ronald Tacelli, S.J., who gave her an impactful piece of advice.

“I’m never going to forget this line,” she said. “He said, ‘Study what you love, and the career will follow,’ and I think it’s the best advice that I’ve ever received.”

Having developed a passion for languages at an early age, Panagopoulos majored in French with minors in Spanish and Italian in the Morrissey College of Arts and Sciences. She aspired to become a U.N. ambassador, but Panagopoulos said she focused more on the social opportunities at BC and less on finding internships and preparing for her career. After growing up in an extremely strict immigrant household, Panagopoulos said she fully enjoyed her college experience because of the heightened sense of independence.

One of Panagopoulos’ college jobs introduced her to the alcohol industry—the industry in which she would eventually make a name. During her junior and senior year at BC, Panagopoulos was the only female employee at the former Brighton bar Mary Ann’s.

“There were a lot of big, burly, football-watching, buffalo-wing-eating guys that worked there, and me,” Panagopoulos said.

After graduating from BC, Panagopoulos said she experienced a career crisis, unsure of what she wanted to do. She eventually took a job teaching Spanish at Dedham High School.

“That job gave me gray hair in my first year, being 21, and the kids were like 16, 17 years old,” Panagopoulos said. “So you can imagine what it’s like being a really young teacher. It was a romper room.”

Panagopoulos decided that teaching was not the vocation for her and took a job at Univision, an American television network for a Spanish-speaking audience. There, she put her language skills to work, translating English advertisements and commercials into Spanish.

All the while, Panagopoulos moonlighted as a sales representative for various brands in the liquor industry, doing tastings at bars and events. Panagopoulos said she enjoyed her night job more than her day job and grew tired of the nine-to-five style of work at Univision. Hoping to make a career pivot, it took over two and a half years of persistence to land a full-time job in the alcohol industry, she said. After accepting a transfer to Las Vegas with Univision, Panagopoulos received a job offer as a brand specialist for Bacardi in San Francisco.

At Bacardi, Panagopoulos said she helped relaunch Grey Goose vodka and Corzo Tequila. She said Rémy Cointreau, the owner of Metaxa, the world’s largest Greek spirit brand, subsequently recruited her as a national brand ambassador. It was this job that sent her on a business trip to the jet-set island of Mykonos, bringing Panagopoulos to her eureka moment.

It would be 10 years, however, before Panagopoulos officially launched KLEOS, her brand of mastiha liqueur, as the first Greek woman to self-start a spirit brand. 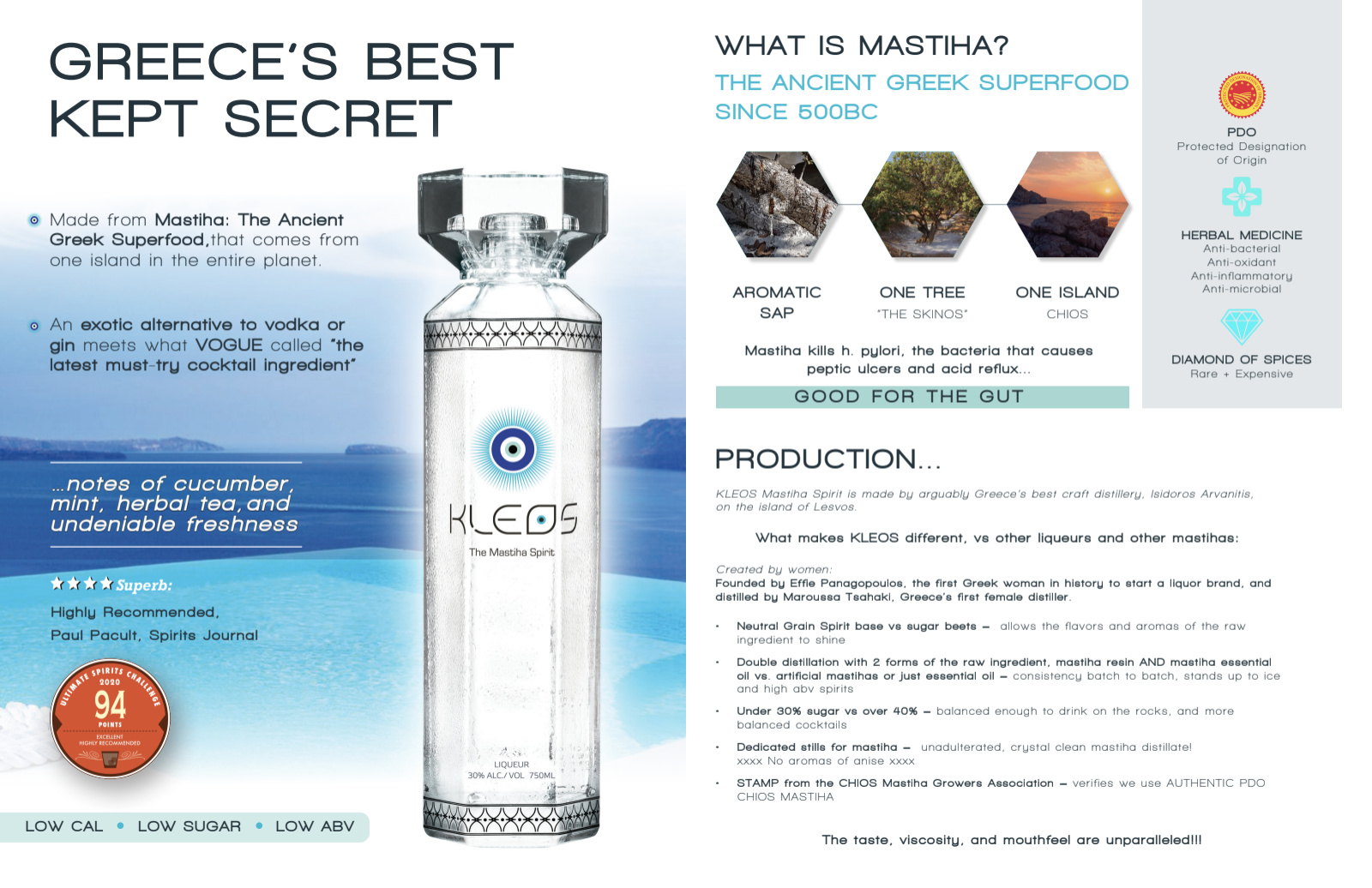 Panagopoulos initially consulted for a different brand of mastiha liqueur, finding that brand’s own importers and distributors in the U.S. Panagopoulos said, however, she received a pittance in salary and no equity in the company.

“It’s the tried and true story of being a woman and not getting paid what we rightfully deserve,” Panagopoulos said. “That was for me the moment where I was like, ‘You know what? I think I can do this by myself. And I think that I can also improve upon the category and really create a luxury brand.’”

Panagopoulos spent five years researching and developing her new mastiha liqueur. She said she worked with six different distilleries to develop 17 different formulas which went through countless focus groups. According to Panagopoulos, the final KLEOS product strikes a perfect balance—dry enough for high-end bartenders and sweet enough for the average consumer.

“You have to have a really strong idea of who are you selling to and what are those people looking for?” Panagopoulos said. “Does your product actually resonate with the people that you think are going to be the ones that are going to buy it?”

After nailing down her product, from the taste of the liquid to the shape of the bottle, Panagopoulos said she struggled to find venture capital for her startup.

Panagopoulos said she became accustomed to rejection from potential investors. The liquor industry in particular is an “old boys’ club,” but being a rare female operator gives her an advantage in marketing to women, Panagopolous said.

According to Panagopoulos, male-dominated liquor brands market to women with an unsophisticated strategy that she calls “make it pink.” Panagopoulos said she is better attuned to the desires of female consumers, who make up a larger share of America’s purchasing power.

“It’s almost common sense, but it hasn’t been the norm for years, in terms of women being in executive management roles and women being founders,” Panagopoulos said.

While preparing to raise money, Panagopoulos tapped into one of her other interests. During her senior year at BC, she earned her personal trainer certification and became enthralled with physical fitness and lifting weights. Living in Miami in 2015, Panagopoulos began preparing for a bodybuilding competition alongside her fundraising efforts.

From planning out her meals and workouts to rising early in the morning, Panagopoulos said that the discipline required for bodybuilding directly correlated with the resolve and determination necessary to raise venture capital. She also credits her physical transformation for a greater sense of self-esteem.

“I did legs today, and it was an excruciating leg workout, and I wanted to give up on a couple of reps,” Panagopoulos said. “And in my mind, my self-talk is, ‘One more rep. You’re closing this investor.’”

Even after securing initial funding, the brand’s launch in 2016 was anything but smooth. Despite extensive research on the bottle’s functionality for bartenders, KLEOS’ initial production run revealed a faulty and easily breakable cap—an incident now known to Panagopoulos as “Capgate.” This early setback, however, solidified what she loves about being an entrepreneur.

“The great thing about entrepreneurship is being your own boss, but it’s also a very scary thing, because you own everything,” Panagopoulos said. “There is no passing the buck to anyone, so it’s awesome and very scary at the same time. But if I were scared, I wouldn’t be doing it.”

Panagopoulos also enjoys the freedom of operating her own brand, free from the red tape of large corporations. According to Panagopoulos, at a big company it can take two years to go from ideation to execution on a marketing idea, winding through the legal, sales, and marketing departments.

Running the show at KLEOS has also allowed her to pursue various ways of giving back to her community, she said. During her senior year at BC, Panagopoulos’ mother became homeless but found shelter at the Phoenix House in Dorchester. In the winter of 2019, Panagopoulos signed up ten local bars to donate a dollar from every drink served with KLEOS to the Phoenix House, and the brand matched each donation.

“Charity in general is just a really important thing to keep yourself grounded and keep things in perspective,” Panagopoulos said. “How can we help and lift other people up as we’re chasing our big dreams?”

One of these dreams has been bringing KLEOS to market in the U.S., and Panagopoulos prides herself on being intensely committed to that goal.

“Entrepreneurs are really obsessed and really focused to the point of [being] almost a little crazy,” Panagopoulos said. “We’ve definitely got a screw loose.”

Drake Behrakis, BC ’86 and a fellow Greek-American, said he heard about KLEOS after Panagopoulos reached out to him. Behrakis became an early investor in KLEOS and said he decided to invest based on her vision and commitment to the brand.

Now, Panagopoulos is focused on another round of fundraising, which she hopes will net $2 million. With this money, she hopes to assemble a team of sales representatives in order to further expand her company and product.

Similar to other American businesses, two obstacles Panagopoulos often encounters these days are bottlenecks at ports—where products get backed up during the exportation or importation process—and the rising costs of materials.

Despite these challenges, Panagopoulos plans to build KLEOS into a brand that will last, marketing the liqueur for catchy cocktails like “Kleopatra” and the “Ay Kleos Mío!”

“I want this to be the mastiha brand that’s on every back bar globally,” Panagopoulos said. “I strongly feel and know that KLEOS is going to be around long after I’m gone.” 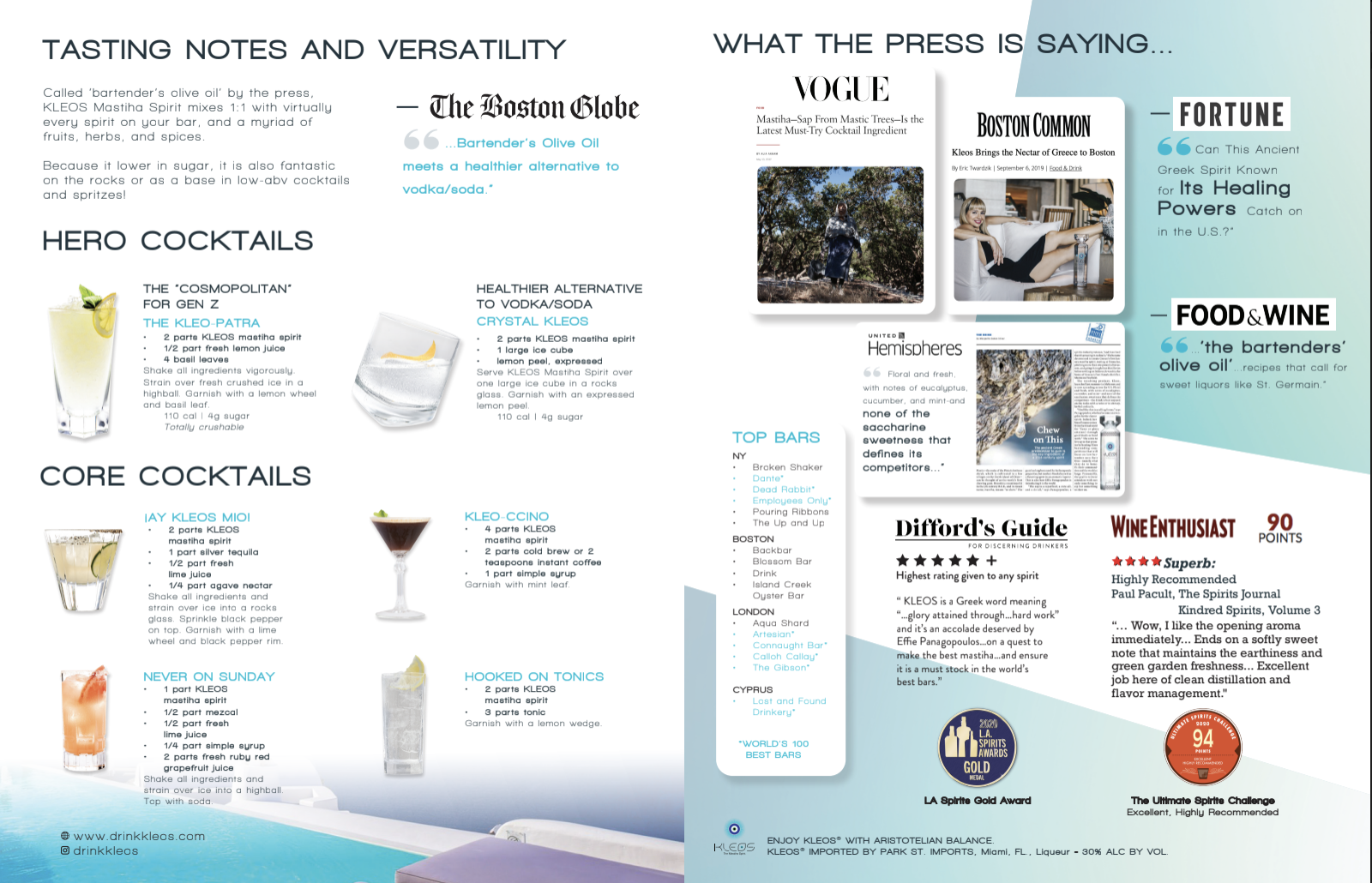 According to Behrakis, Panagopoulos’ intense investment in KLEOS is evident.

“She’s somebody that’s pretty much wiped the table clean and is dedicating her whole life to getting this thing and trying to make this brand,” Behrakis said.

For Panagopoulos, her career has been a lesson in persistence and adaptability. Unsure of what to do after leaving BC, Panagopoulos switched career paths multiple times before taking the leap of faith to start her own business. Panagopoulos said she advises students to be patient with themselves and their career journeys.

“I love meeting young people that are like, ‘I’m majoring in this, I want to do this.’ That’s awesome,” Panagopoulos said. “But I went from education to Hispanic media to the liquor industry to now entrepreneurship and owning my own brand, so sometimes the path is not going to be a direct path, and it’s certainly not going to be a straight line uphill.”

The post Panagopoulos Pushes Liqueur Limits With KLEOS first appeared on The Heights.

The post Panagopoulos Pushes Liqueur Limits With KLEOS appeared first on The Heights.