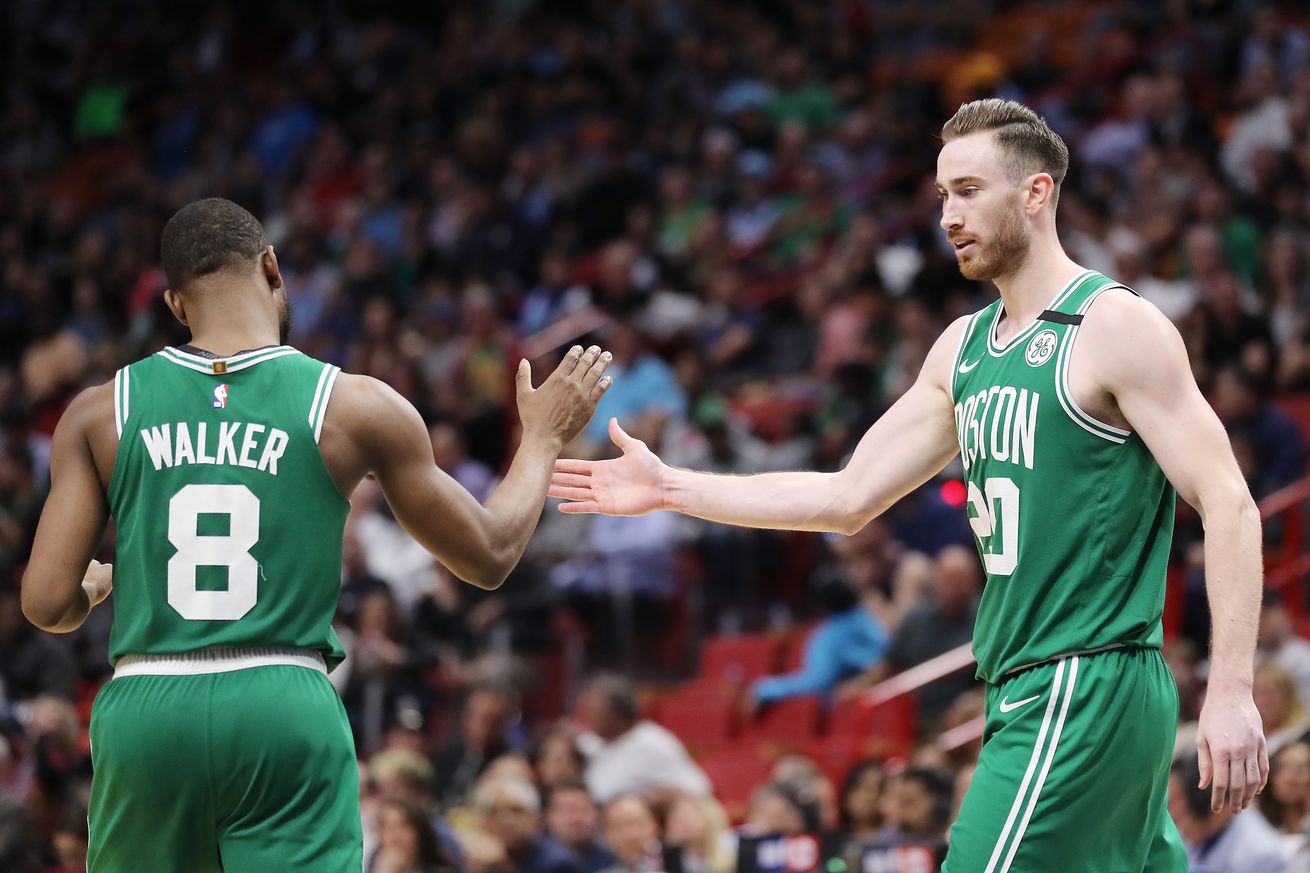 With such a talented collection of wings and ball handlers, Brad Stevens has been able to pare down his playbook.

Brad Stevens has long been regarded as one of the league’s best strategists, with the 2016-17 Boston Celtics serving as perhaps the pinnacle of his whiteboard abilities. As good as Boston’s eighth-ranked offense was that year en route to the top spot in the Eastern Conference, the roster was scarce of shot creators outside MVP candidate Isaiah Thomas.

Terry Rozier was a raw sophomore guard. Marcus Smart, in his third year, was still finding his offensive niche. The Celtics as a whole ranked fourth in spot-up frequency.

IT’s career-best 28.9 points per game covered for a lot of those weaknesses and bailed the Cs out of many broken plays. Even as the focal point, he could only account for so much of Boston’s offense, forcing Stevens to design methods for others to score in ways they best could.

When it came to setting up shots for Jae Crowder or Avery Bradley — both scarce ball handler — the objective for Stevens was simple: devise plays that limited the amount of time between catch and release, thereby curbing their creative weaknesses off the dribble.

Such options were possible but not simple to execute, requiring nuanced layers of both on and off-ball action, potentially involving all five players to come to eventual fruition.

Crowder sets a screen on T.J. McConnell in an attempt to get Thomas in a handoff with Al Horford on the left wing. At the same time, Amir Johnson screens Crowder’s defender, Robert Covington, who’s floated into the paint.

This set isn’t necessarily designed for Crowder, but McConnell’s commitment to stay attached to Thomas opened up a second option for Boston. Crowder tracks back in Horford’s direction at the 3-point line as Covington is late getting over and Nerlens Noel is unaware of the sequence, where he gets an open 3 he promptly drains.

This was a elementary taste of the lengths Stevens went to as a way to maximize the specific talents (and maybe lack there of) at his disposal. Shooters? Yes. Creators? Not so much.

Fast forward to 2019-20. The Celtics remain the same animal amid the top half of the conference standings and an offensive juggernaut (5th in offensive rating at 112.3), but a different beast in the route taken to get there.

Kemba Walker has approximated much of what Thomas brought to the table in terms of a point play heavy on pick-and-rolls.

Gordon Hayward has rebounded from a rough return from injury to pump in 17.3 points per game on 50.2 percent shooting.

More importantly, Jaylen Brown and Jayson Tatum are massive upgrades to Bradley and Crowder, having both blossomed into 20-point-per-game scorers. Tatum, in particular, has grown to be Boston’s leading scorer, the go-to man who ranks ninth in isolation possessions per game.

After having one such player in Thomas, the emergence of Tatum and Brown alongside Kemba and a resurgent Hayward has gifted Stevens four offensive fulcrums who can create something out of nothing.

Unnecessary is the heavy lifting to set up the perfect shot through multiple actions because these talents could do most of the table-setting work themselves. This has led Stevens to untangle much of the nuance behind his previous playbook in favor of more basic schemes.

Tatum doesn’t have a shot on the catch off a Enes Kanter screen, but improved handles and finishing allow him to pull back, get downhill, and convert a contested layup over Robin Lopez. This is something Crowder, as good a 3-and-D player as he was, couldn’t manifest for himself off the bounce.

This isn’t the first time Stevens has altered his playbook, having done so to aid Kyrie Irving amid his short two-year stint.

“Stevens said that in the aftermath of losing Gordon Hayward to injury, and given Boston’s general struggles to generate consistent offense, he simplified the playbook,” according to ESPN’s Chris Forsberg. “There are fewer 3-point turns and more trips on the freeway to let Irving experience the open road.”

When Irving — and Hayward — was out for the 2018 Playoffs, Stevens had to reach back into the same bag that maximized a similar cast of complementary pieces the year before.

The most prominent example came in Game 4 of the second round against Philly. Down one with 7.3 seconds remaining, Stevens’ OTA setup drew Joel Embiid out of the paint and got the 6’10’’ Horford fronting 6’7’’ Covington with nobody on the weak side. A perfect pass by Marcus Morris got Horford an easy layup that gave Boston the lead.

Jayson Tatum might’ve had a game-high 24 points and Terry Rozier followed with 18, but neither warranted the ball in their hands in isolation with the floor neatly spaced at that stage of their careers. So again, Stevens had to ensure the only thing left to chance was the make or miss of the basketball.

With three 20-point scorers, the current iteration of the Celtics is maybe the most gifted collection of top-level offensive talent he’s ever coached, leading to significant changes in the principles of the offense.

Even with the pick-and-roll heavy Thomas running the show, Boston as a team ranked just 25th in pick-and-roll possessions per game with 15.7 in 2016-17. Now, their mark is the seventh-highest in the league at 24.5 while ranking dead-last in catch-and-shoot points per game.

They’re holding the ball longer and taking more dribbles per touch, typical signs of a more selfish brand of basketball. Boston only ranks 25th in assists and 21st in passes per game, but a more star-driven, ball-dominant offense is working because the personnel suits it.

In the final seconds of an early-November game against the New York Knicks, Boston had possession in a 102-102 game with 4.7 seconds remaining.

There were no double screens to discombobulate defenses. No back picks and misdirection to cause confusion.

As Walker sits at the other side of the court, Tatum comes off a Hayward screen to catch the ball in the right corner. A face-up and hard left jab was all a more seasoned Tatum needed to create the space for the game-winning jumper.

Wouldn’t Boston’s title hopes benefit from multidimensional plays that improve overall shot quality? Doesn’t simplicity breed inferiority in the the chess match that is the game of basketball, particularly in the post-season when adjustments are made game-to-game and more adjustments are made against those adjustments?

The question assumes such quality has already been compromised, which isn’t really the case due to the balancing act Stevens has maintained.

Despite drawing up the eighth-most ISO’s per game, the Celtics are also third in the league in screen assists per game, up from 17th last season and 16th in 2016-17. Those screens are simply generating looks better suited for players capable of doing more than your average spot-up sniper.

Slightly over nine of Boston’s nightly shot attempts per game last season had the defense categorized as very tight — within 0-2 feet. This season, that number is at 7.8. Conversely, the Celtics rank second and third, respectively, in field goal attempts considered open — 4-to-6 feet — and wide-open — six feet or more.

Stevens’ modifications have been more about the hard truths of playoff basketball, where defenses tend to know more of what’s coming over a seven-game series and certain plays will work only so many times.

By dumbing everything down, Stevens is putting his trust in a style more easily relied upon come the post-season, like isolations and the two-man game. This is only possible with the prerequisite set of stars who can function in it.

Stevens has that for the first time in his coaching career. Whenever the 2020 Playoffs commence and in the years to come, it’ll certainly be worth seeing if the results are any different.