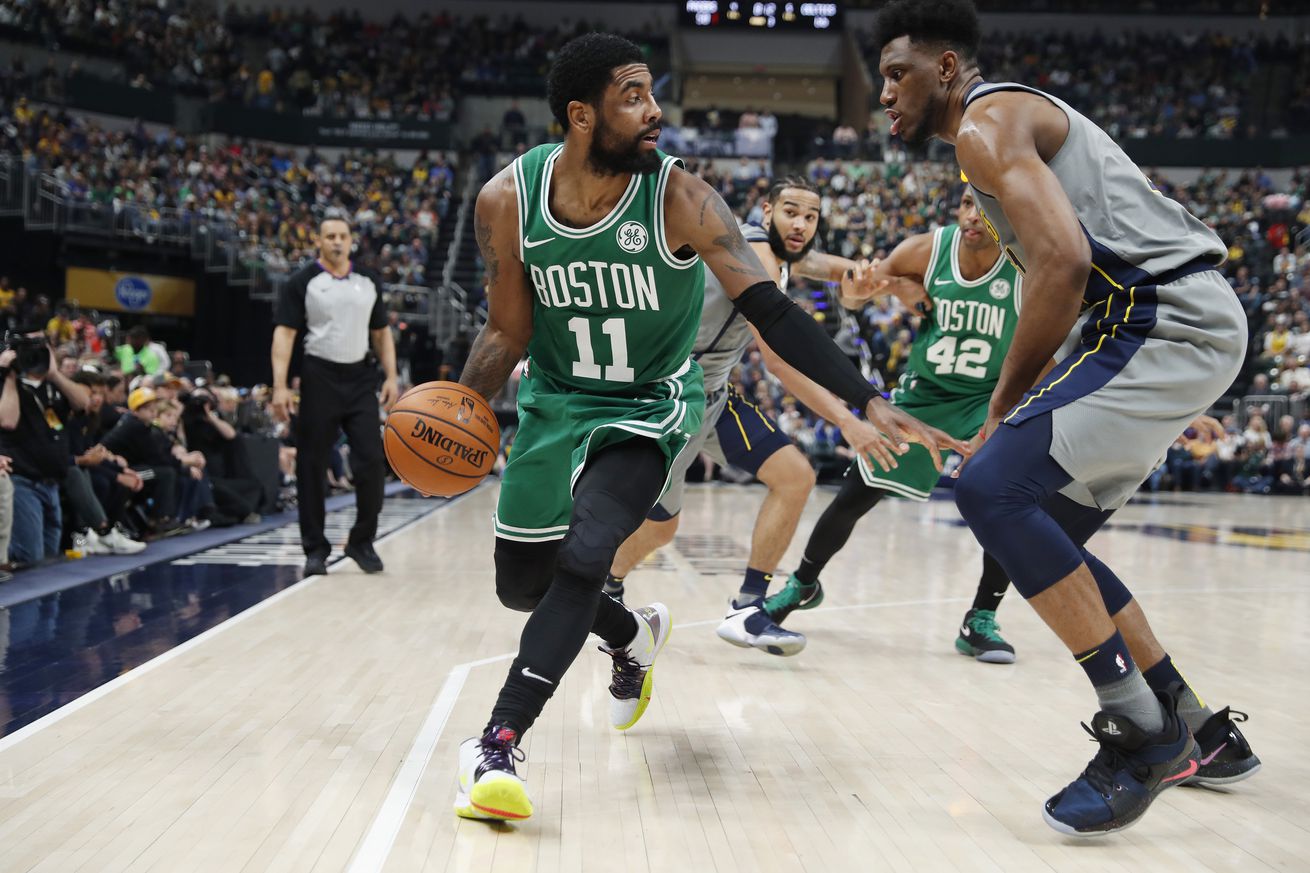 Before Game 1, we talked about Larry Legend, losing Marcus Smart, and Kyrie Irving back in the playoffs.

Before Game 1 today, I did a Q&A with my newest frenemy, Tom Lewis at Indy Cornrows, about Gordon Hayward becoming Old G, the loss of Marcus Smart, Larry Legend and his influence on the Indiana Pacers, and just how scared I am of Domantas Sabonis.

Tom Lewis: Gordon Hayward has emerged as an X-factor for the Celtics with his level of play to end the regular season. Has he been trending in this direction for awhile? How does he change/impact the playing rotation when playing well?

Bill Sy: Things started clicking right before the All-Star Game for Gordon Hayward, but then an ankle sprain duing the break slowed down his progress and right when he started to find his groove again, a concussion knocked him out for a week. But since then, he’s been on a tear, averaging over 16 points a game on just under 60% shooting over the last ten games which included a 9-for-9 performance at Bankers Life. What’s drastically different aren’t just the counting numbers, but how he’s attacking defenses. At the start of the year, he settled on the perimeter and lacked confidence in the paint and around the rim.

At this level of play, Hayward gives Brad Stevens a playmaker off the bench and someone who can dominate against second units and teams in foul trouble. With Marcus Smart out, he’s seemingly a candidate to replace Smart in the starting lineup, but my guess is Stevens will continue to bring Hayward in with the second unit to relieve Kyrie Irving of some ball handling duties and go-to scoring.

In the playoffs, teams will try and effectively take away their opponent’s best player. In four regular season losses, the Celtics have forced Bojan Bogdanovic to shoot 40% from the field and score just under 13 points. If he’s not the Pacers’ focal point on offense, who can they rely on to match Boston’s firepower?

TL: Actually, the Pacers don’t have much of a choice, they have to generate offense through Bogdanovic. One silver lining from the rough finish to the season which includes a drubbing at the hands the Celtics, is that teams were focusing on Bogdanovic and if forced the team to adjust and no one more than Bogey. He was forced to move the ball more and create scoring opportunities for others. As mentioned above, Turner becomes a critical offensive piece along with Wesley Matthews because they will be open with extra attention on Bogey.

Also, Thad Young’s role in the offense is critical since the Celtics have shown no desire to guard Young on the perimeter and instead clog things up for Bogey and others on offense. I’ll point you to Caitlin Cooper’s breakdown of how the Pacers have to adjust this time around against the Celtics.

How does Marcus Smart’s absence impact what the Celtics do? What other concerns do you have heading into the series?

BS: Without Smart, the game plan is more or less the same, but what Smart brings are those moments where momentum seems to change on one big play, whether it’s a floor burn and a big steal or a drawn charge with the game in the balance. He’s the unplanned shot of adrenaline that has invigorated the Celtics so many times this season.

One of my concerns in this series is that the Pacers are a team that throws a lot of punches and the Celtics haven’t always responded to hitting the mat this season. To a man, they’ve all lamented that none of that matters until the playoffs, but there’s a part of me that thinks, “if you didn’t have it then, you’re not going to have it now.” Especially without Smart.

My biggest concern with Indiana is that front line rotation of Thaddeus Young, Myles Turner, and Domantas Sabonis. Boston will filter in smaller lineups with Marcus Morris and Gordon Hayward at the 4, but the Pacers are just bigger and badder and could force Brad Stevens’ hand to play Aron Baynes and Al Horford together a lot. How do you see that chess match playing out?

TL: It is hard to look at the Celtics’ depth chart and inherent options without realizing the C’s and Brad Stevens have a few more pieces on the board to move around. The absence of Marcus Smart helps, but the versatility of guys like Hayward, Jaylen Brown and Jayson Tatum should allow Stevens to go big with Baynes, if needed. But the flexibility to go small (and not be real small) or big depending on how the game is playing out is certainly a reason Vegas favors Boston in the series.

For the Pacers to squeeze out an advantage they will need Myles Turner to be an inside and outside threat offensively. In fact, when they go big, Turner actually needs to play “small” and be a threat if left alone behind the arc. Whether paired with Sabonis or Thad Young, Turner’s impact has to be strong for the Pacers to consider winning. Getting a consistent, high-level of play from Turner offensively is rare, but he needs to find a way at least four times. Turner as a legit threat also opens up the interior for Sabonis to bruise his way to the rim where he has been fantastic this season.

Between Brad Stevens and Kyrie Irving, who do you trust more to deliver what the C’s need in the playoffs?

BS: I feel like I’m being baited to say something that would make Kyrie upset with the media. With Stevens, you have a coach that’s been able to solve every problem in the playoffs over the last two years outside of LeBron James. He’s done it with inferior rosters and a sum-is-better-than-its-parts approach. Admittedly, the Celtics have had issues all year incorporating and catering to everybody’s talent, but when they’re playing up to their potential, they can beat anybody. In a seven-game series, Stevens will figure it out.

However, Kyrie is just the ultimate closer. I get the sense that he’s itching to step up in the playoffs. In those bookend games against Indiana with a home-and-home with Miami sandwiched in the middle, Irving showed a glimpse of his potential in must-win games. In 129 clutch minutes this season, he’s shooting 49.6% from the field. That’s better than Kawhi. That’s better than Harden. That’s what the playoffs are all about.

I might trust Brad Stevens more, but I have faith in Kyrie Irving. Honestly, he reminds me so much of how I felt about Larry Bird growing up. What I’ve always appreciated about the Pacers is how much they’re built in his image: gritty, tough, and smart. In a league that is moving more and more to freedom of movement and offense, do you think Indiana can continue to win at a high level with this style?

TL: Nate McMillan often says the Pacers would like to play faster and shoot more threes, but they are also dealing with a roster that is not set up to run like the Rockets. They tried to add more shooting this year with Doug McDermott and Tyreke Evans, although Evans had a disappointing season. Going forward, the Pacers have Aaron Holiday, who can run and shoot, developing at point guard and two guards in Darren Collison and Cory Joseph on expiring deals, so what direction they move at point guard next year will go a long way to how much faster they can play.

Still, having said that, the Pacers will still be a big team as long as both Turner and Sabonis are not only on the roster but playing together. Turner continues to develop his three-point shot to stretch the floor, but there is no doubt the Pacers don’t mind having lineups that can rely on size and defense to counter a faster style of play they can’t yet match up with consistently.