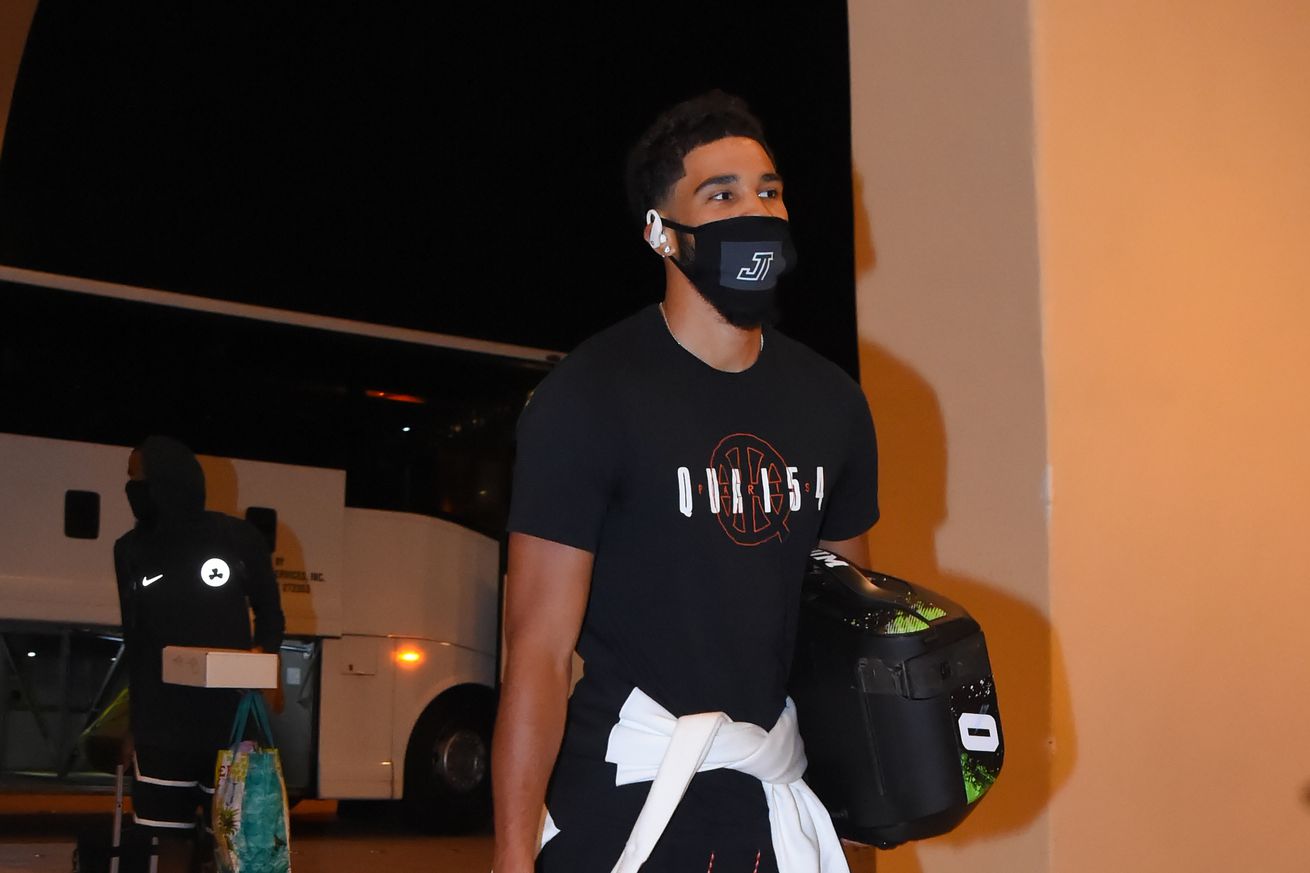 Tatum admitted to adding some muscle, but played coy as to how much

Another level for Tatum would mean superstardom. Tatum was named an All-Star for the first time this season, and then went on to play even better after the All-Star break.

Tatum said he used the hiatus to put on some muscle but grinned “It’s not for public knowledge. I can’t tell everyone my secrets.” From a couple of Zoom calls, Tatum is noticeably bigger and defined in the upper body area.

When asked if it felt good to back to doing something normal, Tatum smiled and said “Yeah it does. Just being able to practice with all the guys and get after it. It’s been fun. We’re all enjoying it. Getting back into the rhythm. We’re having a lot of fun.”

When asked about conditions in the “bubble” at Walt Disney World, Tatum (like Jaylen Brown and Semi Ojeleye the day before) shrugged off any concerns: “It’s basketball. You can’t make no excuses. Just make the most of it. Come here with a positive attitude and get a positive outcome.”

Tatum was asked where the Celtics belief comes from that they can win the championship this season: “That’s the mindset you should have. That should always be the goal. We have a realistic chance. We have a lot of talent. We compete. We play defense. We trust each other. We’re going to fight until there is zero on the clock.”

That championship mindset from Tatum is shared by center Enes Kanter. Kanter said “We have one goal and that’s to get that 18th banner. That’s our only goal.”

Kanter went on to say the Celtics aren’t worried about seeding when the playoffs start: “We’re focused on playing our best basketball. I just want us to have everyone healthy. Not worried about who are going to face and not going to face. At the beginning of the season, we had so many haters. We proved we can be a good team. But job’s not done yet.”

As he generally does, Kanter kept things light during his time in front of the camera. He stepped out of frame before starting his availability to take his shirt off. Multiple times, he beamed and said “I look good, man.” Kanter went on to say that he was able to stay in shape during the quarantine before emphasizing with a smile “I look good. Right?”

Boston head coach Brad Stevens said the team wasn’t able to do as much on Saturday morning as they were on Friday afternoon, because of the time between practices. He still seemed pleased in the team’s effort level though.

Stevens also added some context to his comments from the prior day that the Celtics will take things slowly with Kemba Walker. Stevens said “We want to use this time to strengthen his knee. For him, we’re using this as a ramp-up session, so that he doesn’t have setbacks once we start playing. He’ll start under limited minutes most likely. The goal is for him to not be limited when the playoffs come around. But it’s reasonable to expect in the early games that he’ll be limited.”

Stevens also said that second-year big man Robert Williams is a “full go”. Williams has missed time this season with a variety of injuries, but is healthy and ready to go.