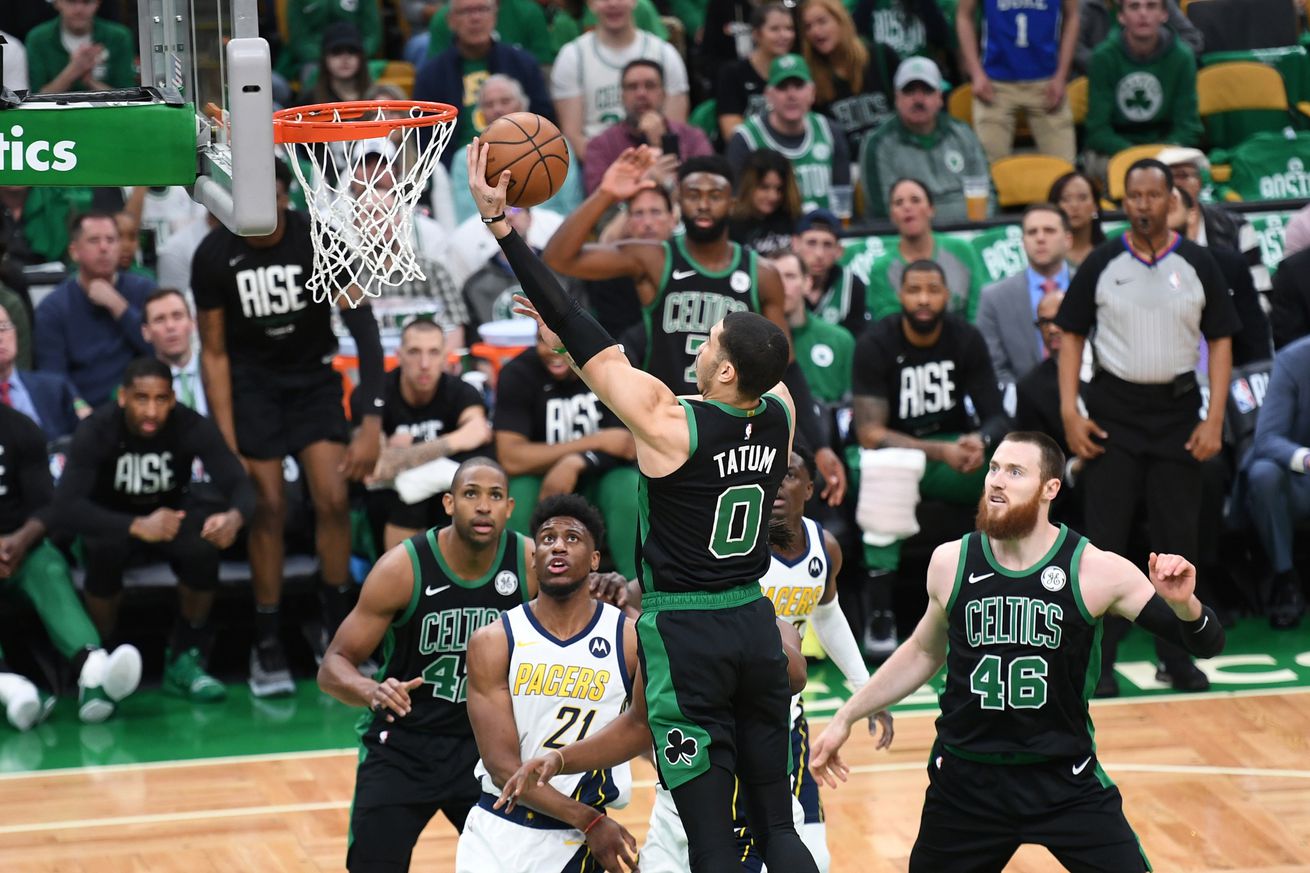 It wasn’t always pretty, but the Celtics smothered the Pacers in the second half and got the playoffs started on the right foot.

Two seasons after joining the Celtics, Kyrie Irving and Gordon Hayward finally got their first taste of playoff basketball in Boston on Sunday afternoon. Their debut turned out to be worth the wait, as a huge third quarter powered the Celtics to an 84-74 victory over the Indiana Pacers in Game 1.

It may have been the two All-Stars’ debut, but it was the defense that stole the show in TD Garden this afternoon. The game was often an ugly affair — both teams shot worse than 40% from the field and combined for a whopping 29 turnovers, while making just 16 of 55 shots from range. Irving led the Celtics’ offense with 20 points and seven assists, Jayson Tatum added 15 on 6-of-11 shooting and Al Horford provided a customary all around effort with 10 points, 11 rebounds and 5 assists. Only two Pacers would manage double-digit scoring totals on the day, Cory Joseph (14 points) and Bojan Bogdanovic (10), and Indiana’s 74 points were the fewest allowed by the Celtics in the playoffs since 2010.

Kyrie gets the C’s on the board! pic.twitter.com/O6Y9f11TPu

After an uneven first six minutes that saw nearly as many Boston turnovers (five) as points (six), the Celtics got a boost from an unlikely source: Marcus Morris, who came off the bench to score 12 of their 20 first quarter points and finish the quarter with a diving steal to get to the free throw line. Morris had been mired in an extended slump since the first two months of the season, shooting just 40% from the field since the start of January, and it was a relief to see him find a comfort zone early. He would finish with 20 points in the game.

Overall, the first half played directly into Indiana’s hands. The Pacers earn their stripes on the defensive end of the court, and in the second quarter, that defense was stifling en route to a 16-3 run that put Indiana in command. The Celtics coughed up nine turnovers in the half — they averaged 12 per game in the regular season — and shot just 33% from the field. The exclamation point for the Pacers’ defense came on a spectacular Thaddeus Young block, rejecting what looked to be an easy breakaway dunk for Horford.

Of particular concern: the Celtics made just four of their 17 three-point attempts in the first half, with many of those misses coming on frustratingly open looks. The Pacers’ depth was quick to punish them, with Matthews, Joseph and Evans scoring 8 points apiece. Indiana would hit just two of their six free throws, however, and never quite stretched their advantage further.

The Pacers led by seven at the break, but that lead would prove to be short-lived. The Celtics opened the second half with a very quick 7-0 run to tie the game, powered by five points from Horford. That run would extend to 15-1 from there as the Celtics continued to push the tempo, while the Pacers couldn’t seem to buy a bucket — they went a whopping eight-plus minutes without recording a made field goal. The Celtics outscored the Pacers 26-8 in the quarter, and led by 11 heading into the final frame.

Of note: Brown, who has struggled with back spasms in recent weeks, showed some evident discomfort in his back in the first timeout of the quarter, though he did not come out of the game.

At the beginning of the fourth quarter, the Celtics got some more concerning injury news, as Aron Baynes left the game after a called blocking foul and was in evident pain on the bench. Baynes has battled injuries throughout the season, and the Celtics have struggled in his absence; his promotion to the starting lineup late in the season helped the Celtics find some stability heading into the playoffs. Losing him for any length of time would be a sizable blow, but luckily, he would check back into to the game with five minutes to play.

In the short term, though, the Celtics continued to cruise after Baynes’ departure, as a Hayward layup and threes from Tatum and Irving pushed the Boston lead to 19 points with less than eight minutes remaining — an insurmountable deficit for the anemic Indiana offense. Irving took a seat with three minutes remaining in regulation, and the rest was a mere formality.

Next up, the Celtics will host the Pacers for Game 2 in Boston, Wednesday at 7 PM on TNT.