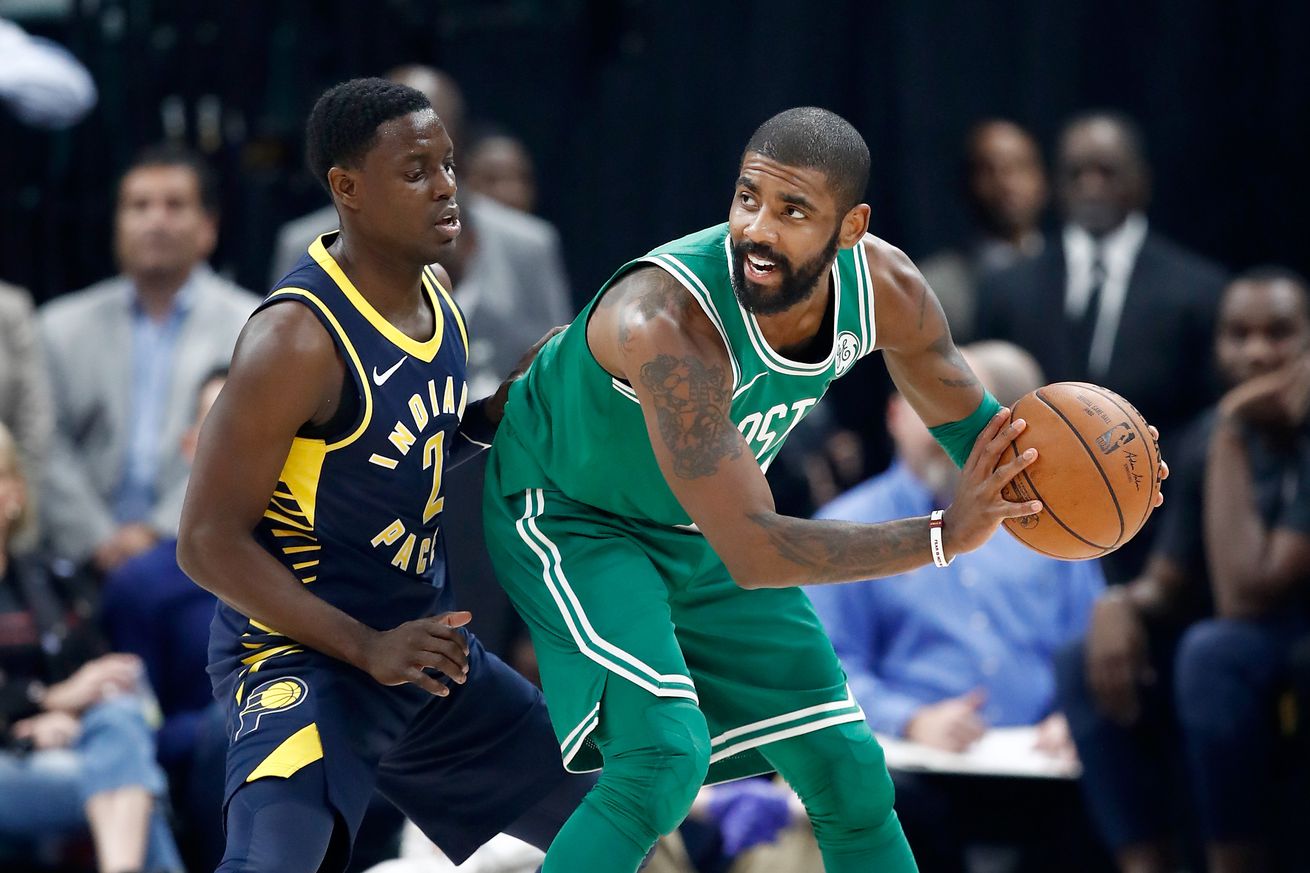 This shouldn’t surprise anyone, but the staff here is unanimously picking the Celtics to beat the Pacers and advance to the 2nd round of the playoffs. There is some debate about how many games it will take to do so. So here are the staff predictions:

Celtics in four. I was gonna go with the popular answer of Cs in five, but now I’ll look really good if Boston actually manages to sweep. The Brad Stevens area has never featured sweeping an opponent, and playing the scrappy yet undermanned Pacers is the perfect opportunity. If Gordon Hayward continues playing the way he is and Kyrie Irving delivers on his “I AM HERE” proclamation, the Pacers won’t be giving Boston much trouble. There’s no way this’ll come back to bite me…right?

Celtics in five. I really want to call a sweep here, and that’s on the table if this team gets rolling. But if there’s one thing that we’ve learned about this year’s team its that they can’t play with a lead. So I predict that they win two at home, head into Indy with swagger, get their doors blown off, and come back with renewed vigor in Games 4 and 5 to finish off the series.

With Smart down, I’m going to make a home here on the conservative side of Optimism Hill.

Boston in six gives us room for the C’s to win four strong games at home plus: One inexplicably bad loss in Indy featuring terrible second and third quarter performances followed by a late push in the fourth that isn’t enough, and another buzzer beater loss where both teams play good defense all night and the coin flips for Bogdanovic or Turner on a McMillan ATO. Bonus prediction: Terry Rozier will score 20 or more points in a Celtics loss in the first round. (His defense will still be abysmal.)

Celtics in five as well. The last two regular season games against the Pacers revealed a good amount in how these two teams match up. The Celtics controlled both games when there was home court advantage on the line. The Boston crowd will be crucial throughout the first two games for the Celtics.

This was a “Celtics in five” prediction until recently, but the news that Marcus Smart will miss up to two rounds of the playoffs with a torn oblique pushes my prediction to Celtics in six. Smart’s absence hurts — and could be crippling in a second-round series against Milwaukee — but the Celtics do still have plenty of talent with which to handle Indiana. The Pacers are trending downward at the exact wrong time, and they simply haven’t beaten Boston this year without Victor Oladipo on the court. I have a lot of respect for what they’ve managed to accomplish despite missing their All-NBA guard for more than half the season, and I expect they’ll take a game or two on their home court out of sheer pride, but the Celtics should still be considered solid favorites here.

Celtics in six, but it will be a far from an easy series given how the C’s played well below expectations throughout the regular season. Why should I expect anything different in the postseason? It does seem like the Celtics have turned a corner recently and Gordon Hayward’s ascending play is definitely a game-changer. With Smart out — he’s the type of player who helps win playoff games with his dirty work — the Celtics margin for error just got smaller. The C’s are lucky that Indiana is without Victor Oladipo and while the Pacers stayed afloat for a while without the star guard, they enter the playoffs having lost 9 of their last 12 games. And with Indiana lacking a premiere go-to scorer that all teams need in the playoffs, the C’s should extend their season by taking the series.

Celtics in five. Marcus Smart’s injury will hurt the Celtics, but not here. The Pacers are simply too undermanned to get more than a game off Boston. The Celtics have enough wing defenders to throw at Bojan Bogdanovic to make his life difficult. No one can take him out of games like Smart can, but they’ll make him work. And Bogdanovic is the only consistent scorer the Pacers have. Indiana won’t be able to score enough to keep up with Boston and that’ll be the difference in a short series.