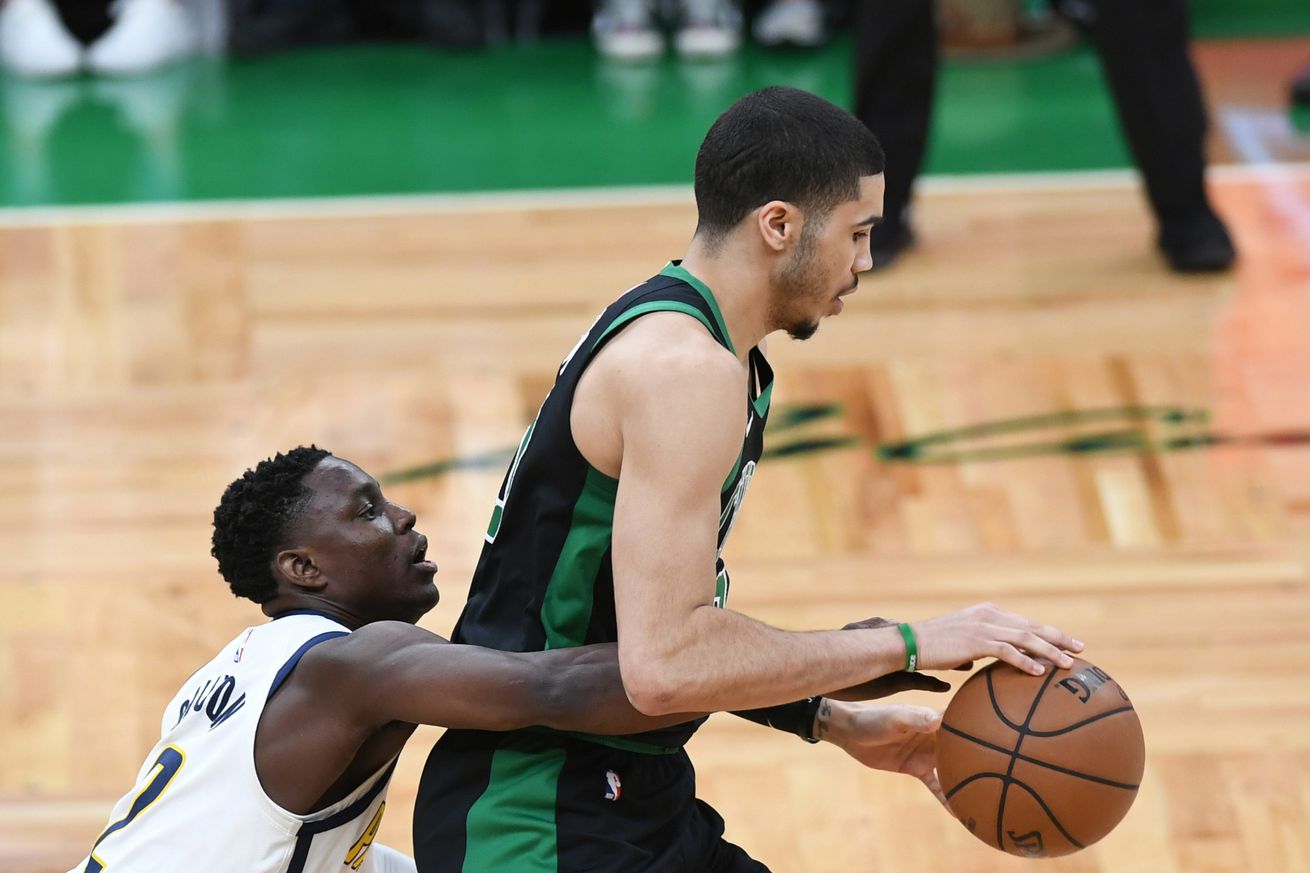 I charted my own stability at the start of, arguably, the biggest playoffs for the Celtics this century.

Good afternoon, CelticsBlog. As I was sitting in my room and carving “SMART INJURED” into the wall of my psych ward cell 900 times, it occurred to me that today would be an emotional watch for Celtics fans. With all the necessary stakes of the playoffs, the looming free agent choices, and our first look at playoff Kyrie Irving and Gordon Hayward, there was plenty to get angsty about.

Against my better judgement, I decided to keep a running diary of the game, to chart my own mental health and see how resilient Celtics fans (well… actually me) could be in the face of the playoffs coming off of a decidedly disappointing season. Let’s start with minutes before tip.

1:02pm – The Celtics Twitter feed just posted all of the Celtics in the tunnel for their pre-game prayer/cheer. I realized I’m more nervous than I thought I was. I’m regretting how hard I leaned into Magic and Raptors slander yesterday and I’m trying to make some quick peace with the basketball gods karmically. PLAYOFF BASKETBALL!

1:05pm – TNT is showing the Marcus Smart injury and I need a drink (seltzer at least). Speaking of which Charles Barkley just found out Tiger Woods is leading the Masters and yelled about it over Shaq talking about X’s and O’s. Good shorthand for the Celtics and the media so far this year.

1:10pm – Reggie Miller on the call? I really need this drink (seltzer).

1:11pm – Celtics lose the tip and Turner hits a long two, but things looked good before that. Kyrie has the answer on the other end and I feel great!

1:12pm – Darren Collison interpreted an isolation on Horford as a mismatch. It didn’t go well.

1:16pm – There’s a steady diet of Collison early in the game here, and I gotta say I’m not exactly sad to see it.

1:17pm – The Celtics have turned the ball over a lot and clearly have instructions to try to run on the Pacers, we’ll see if they can get it under control, especially given that the Pacers are also struggling offensively early.

1:22pm – Another turnover out of the timeout from Hayward who just entered the game. Starting to look like a pretty ragged start.

1:27pm – Sabonis enters the game and the Celtics are entering the dangerous part of the game. It feels like the impact Rozier and Sabonis make on the game are going to decide things one way or another.

1:35pm – A broken play ends up with Morris scrapping for a loose ball and canning a pair of free throws. Crowd loves the effort. Any CelticsBlog writers who didn’t like this guy should be tarred and feathered! Let’s start with *squints* Sam Sheehan. Wait.

1:36pm – Anyone who predicted Morris would be the stabilizer for the Celtics this game after the awful 2019 he had needs to ride this moment and DM slide on their celebrity crush. Anything is possible!

1:40pm – Hayward just annihilated Doug McDermott in transition, clearly drawing on hours of Apex legends training. This is what Celtics fans waited for.

1:44pm – I’m not really sure what Jaylen Brown is doing? He leaves TJ Leaf wide open at the top for an uncontested three that Leaf missed. He’s missed quite a few rotations early. Celtics might need to go to Hayward in an end of the game situation if this gets tight.

1:51pm – Another brutal turnover by Al stops the fast break and give Indiana an easy 2 and it’s followed by a 5-second violation on the ensuing possession. My opinion? The Celtics should stop turning the ball over.

1:53pm – Another turnover for the Celtics. 10 TO’s, 9 field goals. I couldn’t be less nervous, personally. (squeezing mouse so hard my fingertips are bleeding)

This was the worst things got for me psychically. Up until this point, it felt like so many other games this season where the Celtics would miss jump shots and Brad would flounder for an answer. I wasn’t going to say it, but it felt like the Celtics had lost this game in my soul.

1:57pm – A badly, BADLY needed three from Kyrie reconnects the juice to the Garden. All this coming after Thad (mad?) Young had to have a seat after he was hot about a call. Turns out having home court is very good! Who knew!?!?

2:04pm – The Celtics are really struggling to score, but finally get a transition score from Tatum off of a good swarm and miss on Sabonis on the other end.

2:07pm- It looked like the Celtics were going to slide into halftime like a full diaper into the trashcan, but Gordon Hayward put his head down to get two points and keep the 2-for-1 in order. Corey Joseph missed the wind-down three badly, and Hayward diced up the press to get in the lane and find all for a good corner three look at the buzzer. It didn’t go in…but still! It’s not turning the ball over.

2:10pm – A lot of credit needs to be given to the Indiana defense, who have done a great job of helping each other and running the Celtics off the line. All this said, 38 points in a half is abysmal for the 10th ranked offense in the NBA at home, and the Celtics have to take care of the ball in the second half. Indiana has controlled the game thus far, but the fact that Celtics are only down seven should bode well for the second half. This feels like a game where Hayward might need to take the Celtics to the promised land.

2:26pm – Pacers come out of the half shooting a ton of threes. The defense is still there, but the Celtics seem to be looking to work inside a lot more. Turner is still looming large. Doing a great job making things tough for Gang Green.

2:28pm – ALLLLLLLLL HOOOOORRRRFOOOORRRDDD. No further comments at this time.

2:34pm – Kyrie hits a long two and it feels like this one has turned. The Pacers missing their two open threes to start the half really put lid on the hoop for them. Confidence seems shaky. The Celtics aren’t exactly scoring with ease, but are grinding them down to slowly erase the lead. Bojan Bogdanovic’s “Slippin’ Jimmy” routine is the only thing keeping them in this.

2:36pm – Irving has officially entered the playoffs. 13-1 Boston run to push the lead even higher. Feels like the Celtics might be exiting the danger zone.

2:37pm – I remembered that we still need to get through a Wildcard Terry stint. Belay my last reference to exiting danger.

Apologies to Terry for this snark, as he had a big defensive game and was actually very solid in the absence of Smart. I was just haunted by this season.

2:42pm – Momentum has really swung, (for both teams) on turnovers. That’s got to be a point of emphasis going forward in this series. Irving hits a pair of free throws to push the lead to 9

2:43pm – Irving finds Morris in the corner to blow the roof off of the building. Pacers need points like water right now.

2:47pm – Marcus Morris had 20 points on 10 field goal attempts today. You can @CelticsBlog on Twitter to get me fired for all of my Morris slander. (I reserve the right to shift to a nasty, snarky “I told you so” if his pick and roll defense loses us Game 3)

2:52pm – The Pacers have switched tactics to running Tatum through screens to get looks for Doug McDermott. I want to make a joke, but it’s resulted in an “and-1” and two open threes (which he thankfully missed both of). Not having Smart is particularly missed when chasing shooters through off-ball screens.

2:55pm – The Pacers scored eight points in the third quarter and Rozier looked off a wide open Hayward to take a double-contested, out-of-control three which he, of course, canned. Somewhere, Eric Bledsoe’s nose started bleeding.

2:58pm – Jayson Tatum did take one of his Carmelo Anthony dribble step rhythm twos and it went in, so the game has officially fallen into the Celtics side of things and they are extending the lead with Irving on the bench.

3:01pm – As the Pacers 2nd half FG% of 9% is brought up in a graphic, Horford gets a stop and pushes to find Hayward under the basket. Pretty emblematic sequence of this second half for the Pacers.

3:09pm – Under 7 minutes remaining in the quarter and Bogdanovic finally gets a layup. It’s the Pacers third and fourth points of the quarter. The Pacers have helped out by missing their fair sure of shots, but a real awakening has happened for the Celtics defensively.

3:28pm – The Pacers slowly grind it back to within ten in garbage time, but this one was over halfway through the 4th. Final score: 84-74 Celtics. This game did a lot for my worries that the Celtics aren’t a truly elite defensive team, after they gave up gobs of points after the All-Star break. However, the Celtics had a bad shooting night and still won the game. Maybe….just maybe…this team will actually be better in the playoffs. My sanity depends on it.