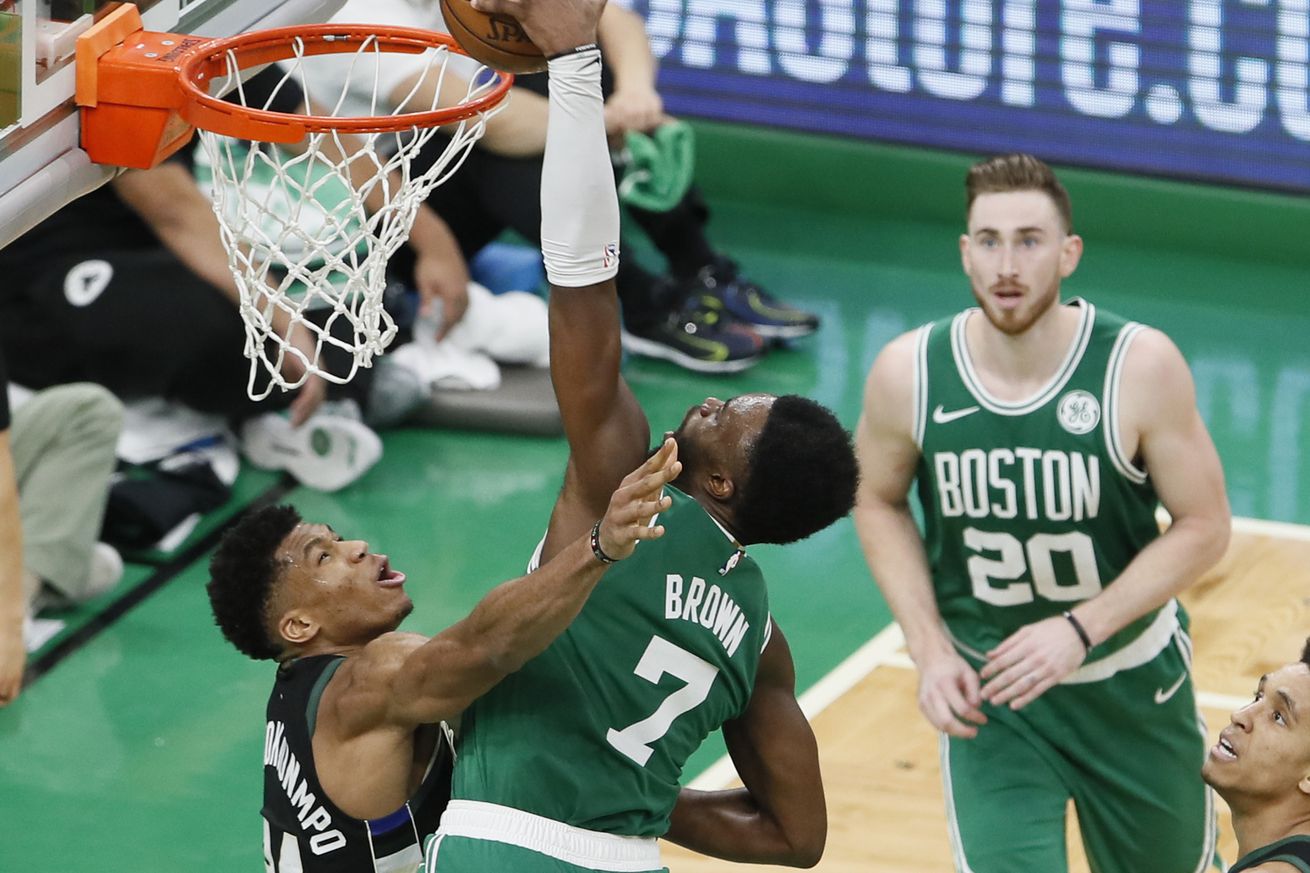 Milwaukee won the regular season series 2-1, but Boston found lots of things that should work in the playoffs

The Boston Celtics have moved on to the second round of the 2019 NBA Playoffs after a somewhat surprising sweep of the Indiana Pacers. Their opponent is the expected one, as the Milwaukee Bucks also completed a first round sweep, easily dispatching the Detroit Pistons. This is a matchup both Celtics and Bucks fans have been eyeing for what seems like months, when it locked in that Milwaukee wasn’t surrendering the top spot in the Eastern Conference and Boston wasn’t climbing higher than fourth. The Celtics and Bucks met three times in the regular season, with Milwaukee winning the regular season series 2-1:

It’s hard to draw a lot from those games, as the Bucks have completely revamped their bench, while the Celtics played each game with some key players out of the lineup. That third game in Milwaukee felt most like a playoff game. But as far as some strategy goes, there are things we can find that worked and didn’t work for each team.

1. Boston is going to have to move the ball to beat a long, athletic Milwaukee defense. Part of that strategy will be playing five-out, with Al Horford pulling Brook Lopez away from the paints. This should open up driving lanes, which is key, but the ball has to move. Ideally, the Celtics will hit the paint to open up shots at the rim, or kick-outs for open shots outside. In the first matchup of the regular season, Boston had 30 assists on 41 made baskets. On this play, Kyrie Irving had just hit two consecutive three-pointers, but he makes the smart, unselfish pass to Jayson Tatum for the better shot. Plays like this, where Boston makes quick passes before Milwaukee can set the defense, will help the Celtics create offense against the Bucks:

2. Against the Pacers, the Celtics played with championship-level of effort on defense. They are going to need that, and even more, against a far superior Bucks team. Milwaukee rarely has an offensive hole on the floor. It’s going to be hard to direct the ball one way for the Boston defense. What has to happen is to play with great effort. In this clip, Marcus Morris misses a layup. He doesn’t sulk or hang his head or beg for a foul. He sprints back in the play to cause a turnover. Boston can’t have any letup on defense because things aren’t going great on the offensive end or because they aren’t getting calls. Milwaukee will take advantage too easily if they do.

3. Speaking of defensive effort, Irving needs to bring it like he did in the first round. He ranged from good to great on defense against the Pacers. Indiana regularly targeted him on switches, but Irving either held his own or Boston scrambled out of it. The Bucks will do the same. One of their pet plays is to run an Eric Bledsoe/Khris Middleton screen and roll to get Middleton matched up with Irving. Irving has talked openly about drawing inspiration from how Marcus Smart and Terry Rozier battle bigger players. On this play, he puts that to work by holding Middleton off and forcing a huge turnover late in the game:

1. With Marcus Smart expected to miss most, if not all, of the series, it’s going to fall to Jaylen Brown to step up again. He’s probably going to draw Middleton to start games as his defensive assignment. And he’s going to have to make plays on offense. Brown was quiet on offense in the first two games of the Pacers, but then great in Games 3 and 4. It may have taken him a bit to adjust back to starting vs the reserve role he had excelled in. The Celtics will need Brown to be ready to go right from the jump against the Bucks. He needs to play fast, but under control. And Brown needs to do it not only as a scorer, but as a playmaker for others, as he does here when he finds Daniel Theis for the easy finish. Outside of Giannis Antetokounmpo, Milwaukee doesn’t have a player who can match Brown’s speed and athleticism. He could be the key for Boston’s offense to find some easy points.

2. This game was one of the ones that caused a famously extended 35-minute, closed-door team meeting following the loss. No one specifically said what was discussed, but when Irving did meet with the media, he noted that there was “Obviously, some selfish play out there where we have some really talented guys, but we’re better as a team sharing the basketball.” To emphasize that point, here is a clip of the Celtics at their best with moving the ball. All five players touch it before Brown drills an open three-pointer:

3. Semi Ojeleye could be unearthed to guard Antetokounmpo because his strength/quickness combination has had some success defending against Antetokounmpo in the past. If Ojeleye, or anyone else for that matter, is guarding Antetokounmpo, they have to make it harder than this clip. There is a reason Antetokounmpo is an MVP candidate. He’s a tough cover, but it can’t be this easy:

1. The Celtics have to make Brook Lopez guard, especially out on the perimeter. That’s one reason this may not be a series where we see much of Aron Baynes. Baynes gives Lopez a natural place to guard. Expect Boston to spend large chunks of the series downsizing with Horford at the five, which will pull Lopez out of the paint.

In addition, the Celtics will try to get Lopez switched on someone who can make plays off the bounce. Boston has no shortage of options for this. Expect Lopez to be the targeted attack-point early in the game. When he’s out, the Celtics will switch to going at Nikola Mirotic or Ersan Ilyasova, both of whom Boston has hunted in previous years in the playoffs. Either way, look for a lot of plays like this one from Morris against any of the Bucks bigs:

2. Milwaukee is a really good defensive team. They finished with the best defensive rating in the NBA by over half a point. Boston is pretty good themselves, as they finished in seventh. This series will likely play out like Game 3, where it was a grind-it-out affair. Because of the Bucks length, quickness and discipline, they tend to make teams work deep in the shot-clock to find shots. The Celtics can’t panic late in the clock, especially if the matchup they want is there. They need to be patient to work for the good shot.

In this clip, Boston takes their time to make sure Horford can work against the much smaller Tony Snell. Antetokounmpo helps initially and forces Horford to give it up, but Brown, off the drive and kick from Tatum, takes the time to re-post Horford and the Celtics get a layup:

3. Brad Stevens made a concerted effort to play through Jayson Tatum at times during the Pacers series. Tatum would often iso on Bojan Bogdanovic. Or he’d go at a mismatch, either going to the rim on a bigger, but slower player or going at a quicker, but smaller player he could shoot over. Expect the Celtics to continue this.

Outside of Irving, Tatum has been the best offensive creator for the Celtics this year. For Boston to pull off the upset, they’ll need players beyond Irving and Horford to step up. The prime candidates are Tatum and Gordon Hayward. On this play, Tatum splits the Bucks two All-Stars for the short turnaround in the paint. Expect to see the Celtics call upon their second-year star quite a bit for plays like this:

Just for fun, here is one more play. It was from the second regular season matchup and it the game wasn’t going great for Boston at the time. But Jaylen Brown paid that no mind and let Giannis Antetokounmpo know who he was:

It’s unlikely to matter, but sometimes plays late in blowouts give other teams something to think about. Brown may have done that here for the Celtics. Boston might get down, but they aren’t going to give up. They’ll keep coming.