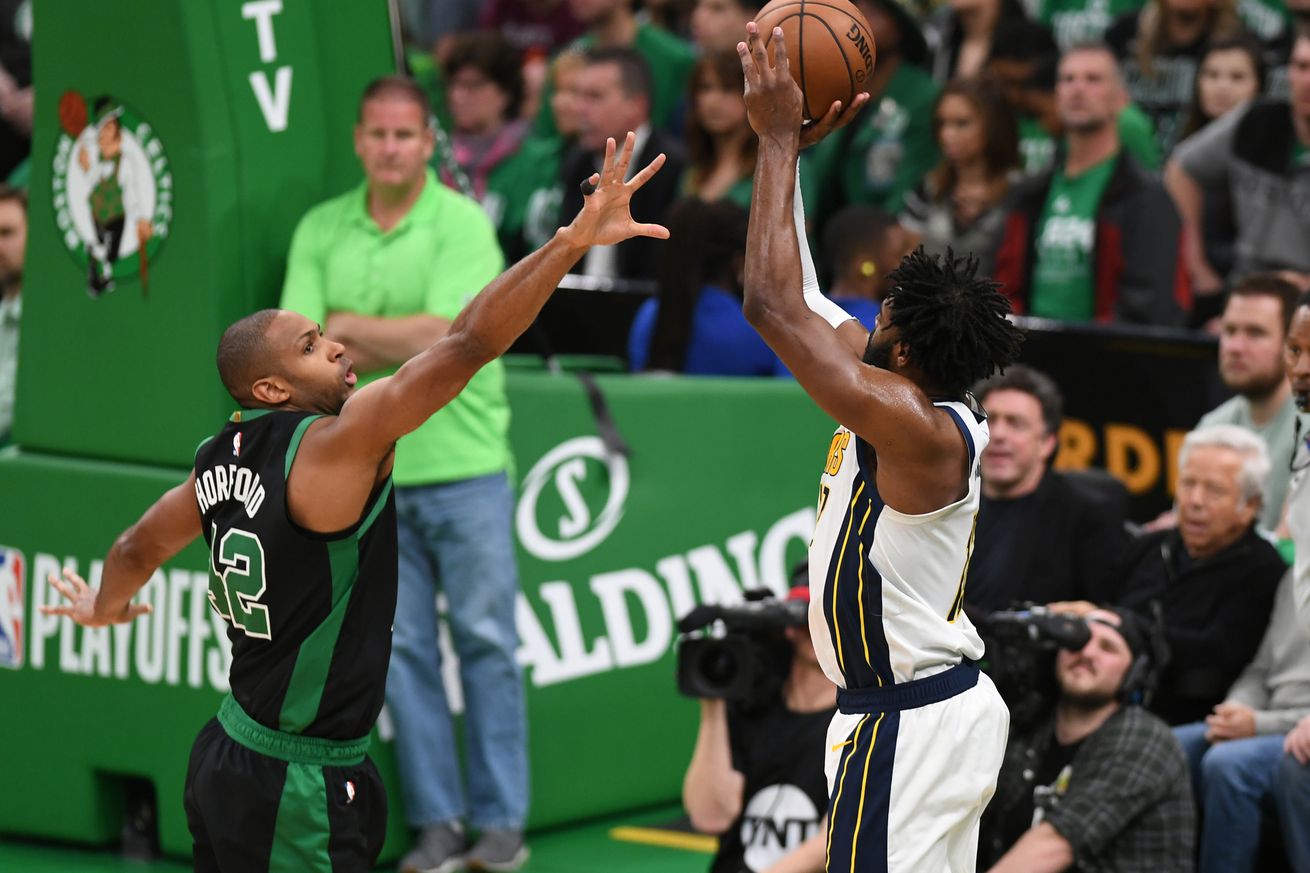 The Celtics showed that even with their own offensive struggles, their defense is what will lead them to a series victory.

If you only saw final score of the Celtics and Pacers game, you would have thought the clocks were turned back a decade or two. An 84-74 finish is not a result you are likely to see in today’s NBA. No matter how they got there, it was a huge first victory for the Celtics to use that momentum going forward in this series. As the score suggests, the defense was a main takeaway from this game that can help them in the future.

Over the last few weeks, the Pacers have been looking like the team we all assume they would following the injury to Victor Oladipo. They were riding a hot streak with everyone clicking on offense, but recently have been looking for options to score. This is what was most prominent in yesterday’s game.

Without Marcus Smart, the team knew they would have to take on more of a defensive mindset in the game. Smart is the grind-it-out defender that is contagious throughout a team. It was a great sign when the team looked to be focused on defense from the jump. The Pacers finished the game shooting 33.3%, including scoring eight points in the third quarter on 2-for-19 from the field. No one was able to take over the game as everyone was searching to find a groove. Only two Pacers scored in double digits.

While also benefiting from off nights, the Celtics were playing dominant defense most of this game. The game plan seemed to be baiting their main offensive weapons into isolation opportunities and trusting the defender no matter the match up. Tyreke Evans, Wesley Matthews, and Bojan Bogdanovic were the three to which this plan was most effective. All three players had terrible shooting games, and the Celtics took advantage of that by letting them try and score ISO on Boston defenders. It did not work out well for the Pacers.

It is here where you can see Terry Rozier make a great defensive play closing out on Evans. Rozier is then able to recover back and guard against the drive. Even as Rozier is undersized, he does a great job staying in front and impeding him from getting to the basket. Then, by that time, Al Horford is able to rotate over and contest the lay up as well. Letting Evans try isolation, hero-ball is a formula to success most nights. Stevens and this team knew that in this game and executed it well.

Another point of emphasis from this defensive performance is the amount of turnovers taken away by the Celtics. The Pacers finished the game with 13 team turnovers. Boston did a fantastic job collapsing on the ball handler whenever someone came into the paint. This caused a number of bad passes and steals all starting from the initial pressure.

Even though the ball did not reach the paint yet, the collapsing pressure defense was what caused this turnover. Domantas Sabonis had Horford on his hip denying him any space to make a clean pass. Most of the defensive highlights were similar to this clip. It was a complete team defense performance with everyone doing their job. The pieces were picked up even with out Smart. It showed that this team can grind out a win even if the play is sloppy on the other end of the court.

Here is another clip that was one of the better defensive sequences. First, Jaylen Brown shows brilliant on ball defending staying in front of Bogdanovic. Then, Brown is able to fight through the Myles Turner screen while Aron Baynes did a solid job staying out to contest a possible shot. After Brown gets back, Baynes recovers and gets in the way of the pass while everyone else is collapsing on the paint.

Keeping up this defensive intensity will be crucial for the Celtics moving forward. They match up well against the Pacers, but adjustments will be made by both of these teams. It is very doubtful they have another shooting performance like that one, so the Celtics will have to be ready for more of the shots to fall.

Collapsing the paint and letting their guards try and play hero ball are two defensive strategies that will work against this Pacers team. Stevens and the team know they will have to be flexible in this series. The Pacers will come back fighting trying to steal a game on the road, but if the Celtics can have another defensive outing such as this one, it will be tough for the Pacers to win on Wednesday.