It had been said before the NBA playoffs started, but after the Boston Celtics defeated the Milwaukee Bucks in a pivotal Game 4 on Monday night, it now will be said by generations of Green Teamers.

Celtics fans have Brad Stevens to thank for that.

The move by the first-year president of basketball operations to bring the veteran big man back to Boston played a crucial role in The Great Celtics’ Turnaround of 2022. And in the biggest moment, when hope seemed lost as the C’s faced a double-digit deficit at Fiserv Forum, in what likely would have been a season-altering defeat, during a campaign where the NBA Finals actually feel attainable, it was the 35-year-old Horford that put his younger teammates on his back. Behind Horford’s best playoff game of his career and unusual raw emotion, the Celtics rallied to tie the series with a 116-108 victory.

So in a contest where Jayson Tatum showcased his superstar talents in crunch time and in a game where head coach Ime Udoka trusted the right players at the right time, it was Stevens who was among the biggest Game 4 winners.

After all, it was Stevens who made a difficult, but savvy business decision last summer when he traded Kemba Walker and a first-rounder to the Oklahoma City Thunder with the return headlined by Horford. Horford quickly proved his value to the Celtics while Walker, who unfortunately was hindered by knee issues, was bought out by OKC and ended up playing 37 games for the New York Knicks.

The trade ultimately helped Horford escape Oklahoma City, the worst place for an NBA veteran, which he continues to be thankful for.

“I just know that I’m just really grateful for this opportunity that I have,” Horford told reporters after Game 4, as transcribed by MassLive’s Brian Robb. “It started with the summer and it just continued in season. And now, these are the moments that I want to be a part of, that I want to play.” 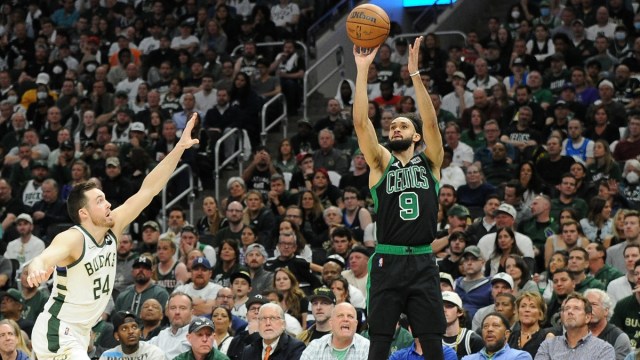 Over the last four months, Horford has provided Udoka with defensive versatility and the ability to space the floor. But it has been his leadership and consistency which have helped Boston’s turnaround the most. All of those aspects were on display when Boston might have saved its season Monday in Milwaukee.

Horford recorded a team-best rating of plus-20 while defending Bucks superstar Giannis Antetokounmpo on one end only to shoot 11-for-14 from the field (5-for-7 from deep) on the other. He was exceptional.

In addition to Horford, the Celtics were granted a crucial performance from another player acquired by Stevens.

Derrick White, who was acquired at the NBA trade deadline from the Spurs in a deal where the Celtics sent a first-round pick and young role players to San Antonio, was second behind only Horford as a plus-18. Coming off the Boston bench with others in foul trouble, White excelled on the defensive end and held the Bucks scoreless (0-for-12 from the floor) when he served as the “primary defender.”

“We needed that with Jaylen (Brown) out,” Celtics head coach Ime Udoka told reporters of White, per NBA reporter Keith Smith. “As I’ve said all along, it’s not only the scoring, but (White) makes the right play shooting, or creating or taking his floater.”

White’s biggest impact came on Milwaukee star guard Jrue Holiday, who scored 16 points on an inefficient 5-for-22 from the field. Holiday was minus-23 in the game, the worst on the Bucks. White himself added 11 points, four rebounds and three assists in 34 minutes. The Celtics outscored the Bucks by 27 points with White on the floor in Milwaukee, making his biggest impact when it mattered most.

The Celtics surely hope they continue to receive those performances from Horford and White, and if helps Boston advance deeper into the postseason, Stevens will be among the biggest reasons why.

The post Brad Stevens Can Thank Al Horford For Being Among Celtics’ Game 4 Winners appeared first on NESN.com.