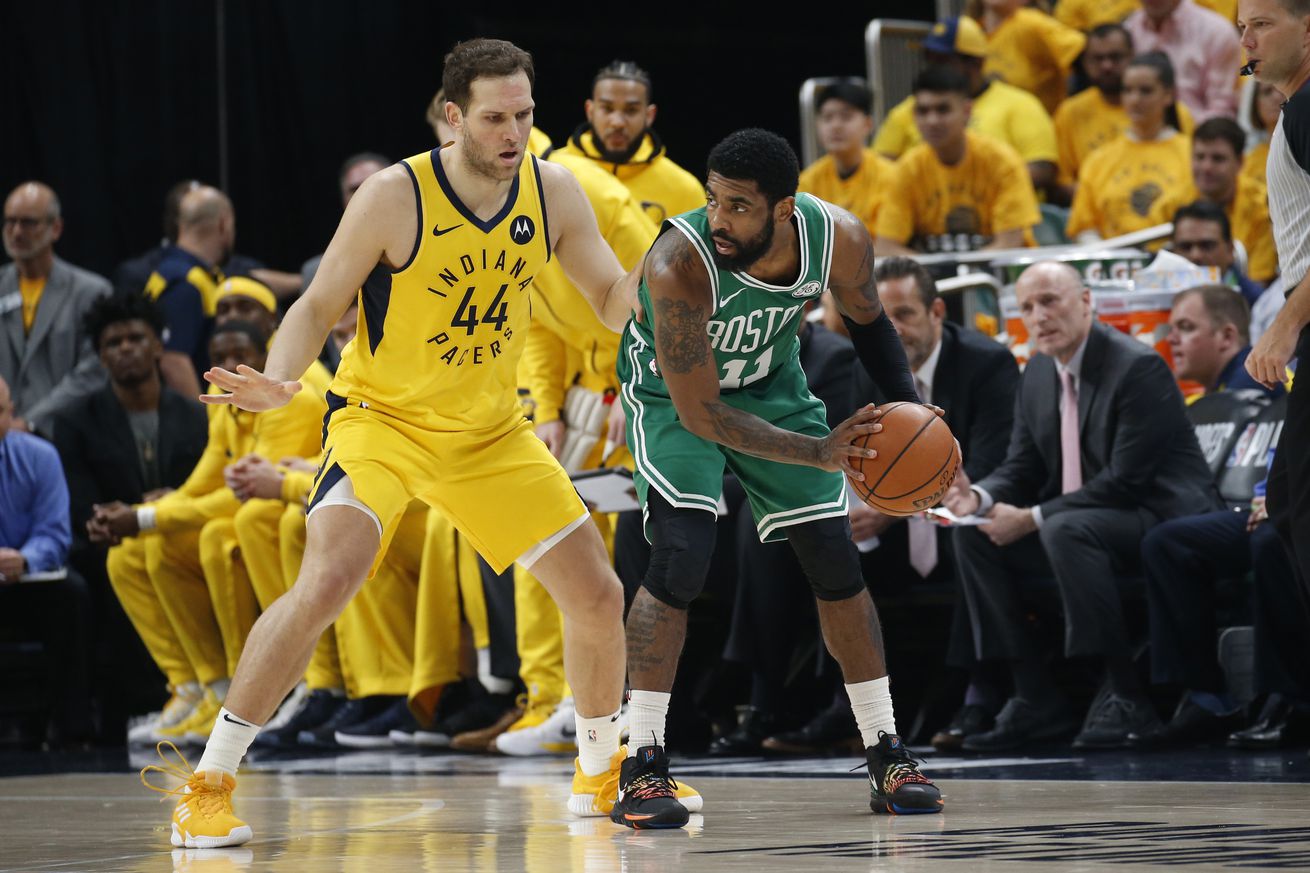 Break out the brooms, the Celtics are headed to the second round.

The Boston Celtics reminded the basketball world that they’re not a team to be taken lightly, as they downed the Indiana Pacers 1110-106 and became the first team to advance to the second round of the NBA Playoffs. Though Kyrie Irving and Al Horford struggled to find an offensive rhythm, combining to shoot just 8-of-31 from the field, the Celtics’ depth was more than up to the task. Boston’s bench compiled 49 points, led by 20 from Gordon Hayward and 18 from Marcus Morris, and the Celtics completed the sweep and ended Indiana’s season.

The Pacers made it clear in the early-going that completing the sweep wouldn’t be easy. The Celtics opened play with a quick 8-0 run, but the Pacers quickly answered with a 13-0 run of their own. The offensive momentum didn’t last long, though; both defenses quickly established themselves, and the remainder of the quarter was reminiscent of the Celtics’ ugly 84-74 win in Game 1 — low-scoring and physical. The Celtics shot just 36% from the field and committed five turnovers, but the Pacers managed just 32% in their own right and led by just two heading into the second.

Gordon to the RACK! pic.twitter.com/ycH7Zlmk3n

Once again struggling to find the net from behind the arc, the Celtics had to rely on their ability to attack the basket. They made just 3 of their 15 three-point attempts in the first half, with Irving and Horford combining to shoot just 3-of-14 from the field, but the Pacers’ wings struggled to contain aggressive drives from Tatum and Hayward. The duo combined for 17 points in the half, but the Pacers would enter the break with a 49-47 lead sparked by an enormous Myles Turner dunk late in the second quarter.

PUT ‘EM ON A POSTER pic.twitter.com/KYBOXuFWgM

Third quarters had been a sore spot for Indiana through most of this series, and this, clearly, was a point of emphasis for Nate McMillan’s squad this afternoon. After scoring just 20 points combined in the third quarters of Games 1 and 3, the Pacers scored 23 today. They surged out of the gate, forcing a timeout from Brad Stevens just 57 seconds into the half, and piled up nine points in the first three minutes, led by a pair of threes from a surging Bogdanovic.

Though Indiana’s third quarter effort was vastly improved, it wasn’t enough to shake the Celtics. Boston retook the lead in the closing moments of the quarter, led by resurgent play from Irving and Horford, who finally started to see some shots find the bottom of the net. Horford made a couple nice plays in the paint, pushing his offensive rebound total to six, and Irving put Thaddeus Young on skates with a signature display of dribbling. Entering the fourth quarter, the Celtics led 73-72.

Building a multiple possession lead proved to be a tall order for both teams in the beginning of the fourth quarter. Rozier opened scoring in the final period with a triple, but quick buckets from Tyreke Evans and Domantas Sabonis kept the teams tied. Evans in particular seemed to find his stride after struggling for the first three quarters of the game; he started the game just 1-of-10, but hit his first three shots in the fourth and hit three free throws. With eight minutes remaining, both teams remained tied at 80.

With 6:45 to play, Rozier picked off an Indiana pass and triggered a fast break, passing ahead to Tatum for a breakaway dunk opportunity that was foiled by excellent transition defense by Cory Joseph, who flew down the court and managed to foul Tatum to prevent the basket. Though the effort was impressive, Joseph inadvertently swiped the side of Tatum’s head, and the play was rightfully ruled a Flagrant 1. Tatum hit both free throws, and the Celtics regained a one-point lead.

With five minutes remaining, Morris picked an opportune time to drill his first three-pointer of the game, connecting from the wing to push the Celtics’ tenuous lead to four points, the first two-possession lead for either team since the beginning of the quarter. Moments later, the Celtics made a trio of crucial plays: a pull-up three-pointer from Hayward, a breakaway dunk from Tatum and a corner triple from Morris to extend the Boston lead to 10 points with just two minutes remaining.

With the victory, the Celtics become the first team to advance to the second round of the NBA Playoffs. They’ll now enjoy a brief period of rest as the first round of play concludes, before facing off against either the Milwaukee Bucks or the Detroit Pistons, a series the Bucks currently lead 3-0.