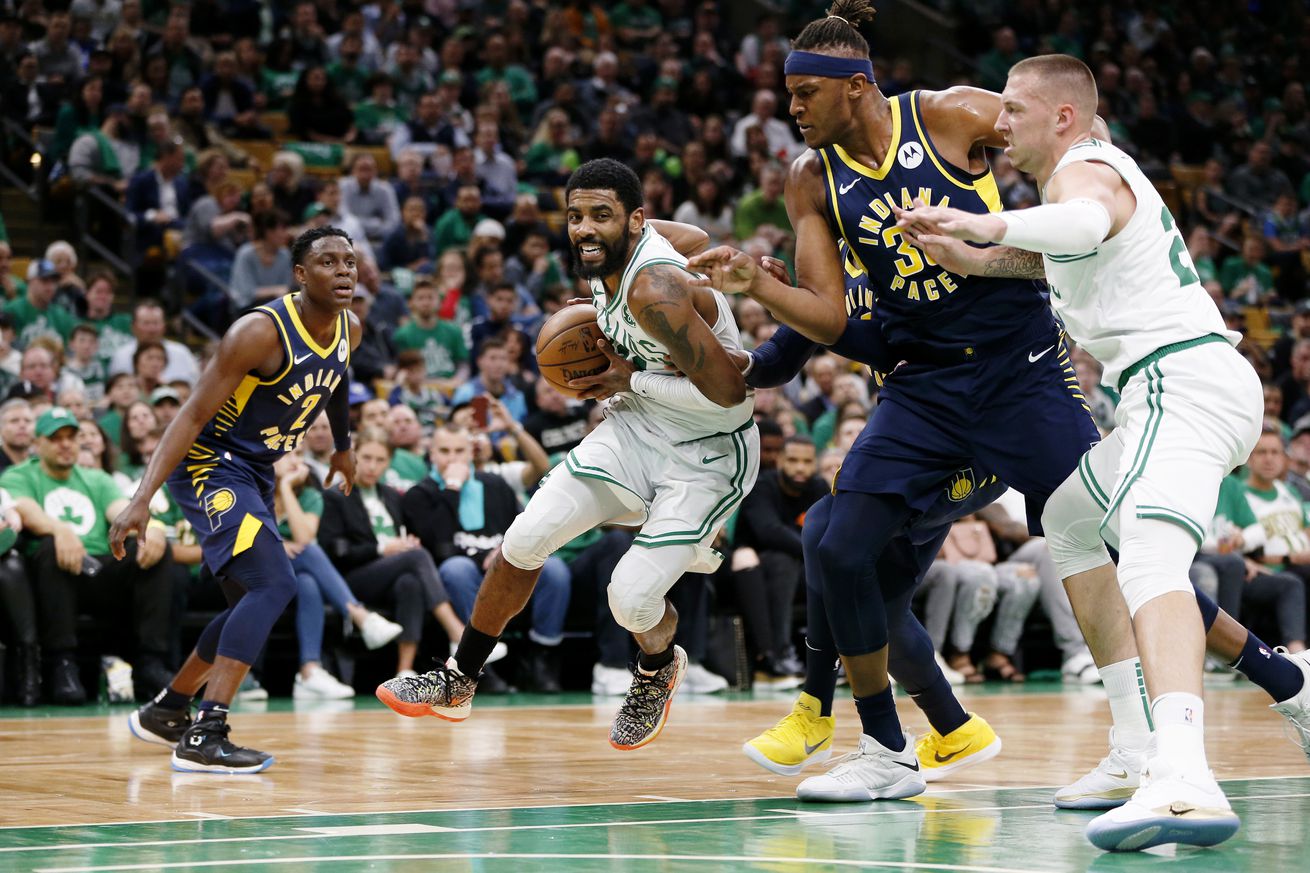 A monsterous night for Irving and a big fourth quarter gives the Celtics 2-0 lead heading to Indiana.

The dual threat of Kyrie Irving and Jayson Tatum scored 19 fourth quarter points to give the Boston Celtics a 99-91 victory over the Indiana Pacers. The Celtics took a 2-0 series lead behind an incredible, monstrous and efficient game from Irving who had 37 points in just 26 shots. The late game hero, however, was Tatum who turned the clock back to 2018 with a nifty 26-4-3 line and big time heroics. The sophomore loomed large for the Celtics in the critical moments of the game, with a huge three and an assist to push the lead to three with 12 seconds left

We’ll pick things up midway through the fourth, with Irving returning to the game after a Al Horford-Tatum led unit cut a large Pacers deficit to four. The Celtics played staunch defense, forcing four Pacers misses as the Hoosier State representatives went cold. This was more than enough of a window for Irving who hit two big

threes and a a fadeaway to give the Celtics a four point lead and cap a 16-0 run for the Celtics.

However, Wesley Matthews had the answer for the Pacers after he hit a big three after the Bogdan Bogdanovic collapsed the defense. After Irving got a free throw on the other end, Bogdanovic pushed the lead to two with a pair of huge threes sandwiched around a long Hayward two.

However, the Celtics responded in a big way, as a big Horford block led to a push by Jaylen Brown that led to an open three which was stuck by Tatum. Matthews missed the next three and Tatum found a wide open Hayward to push the lead to three. The Pacers turned the ball over out of the time out and Tatum scored an “and-1” to put the game away.

The Pacers came out of the third early ready to prove that the last third quarter they had in Boston was a fluke, dropping a 10-0 run early in period before the Celtics got two from Irving finding Tatum. Irving would continue to hit big threes throughout the third quarter but Celtics turnovers escalated the problem and soon the Celtics had their own third quarter travesty as they were outscored 29-13.

The Celtics bounced early back in the fourth quarter, coming out strong behind the defensive and offensive mix of Horford and a mini-takeover by Tatum, who grabbed ahold of the offense during a do-or-die stretch of the game. Even his misses were productive as the Celtics climbed back into the game, as he grabbed his own finger roll miss for a score and his wide jab step was collected by Terry Rozier for a quick two. After two free throw misses by Tyreke Evans, Tatum blew by his man for a slam to pull the game within four with their 8-0 run.

TATUM BRINGS THE CROWD TO ITS FEET! pic.twitter.com/mpSyepXH8j

The rock fight that played out between these two teams on Sunday was nowhere to be found in the first quarter, as it was a high scoring affair early. Celtics had the opposite struggles of Game 1 early, with the Pacers starting their night 8-10 from the field while conceding a 13-0 run. This was conceded by the Celtics, who started their night 5-5, hit just two of their next ten shots.

The series will now shift to Indiana for Game 3, which will tip Friday at 8:30pm.