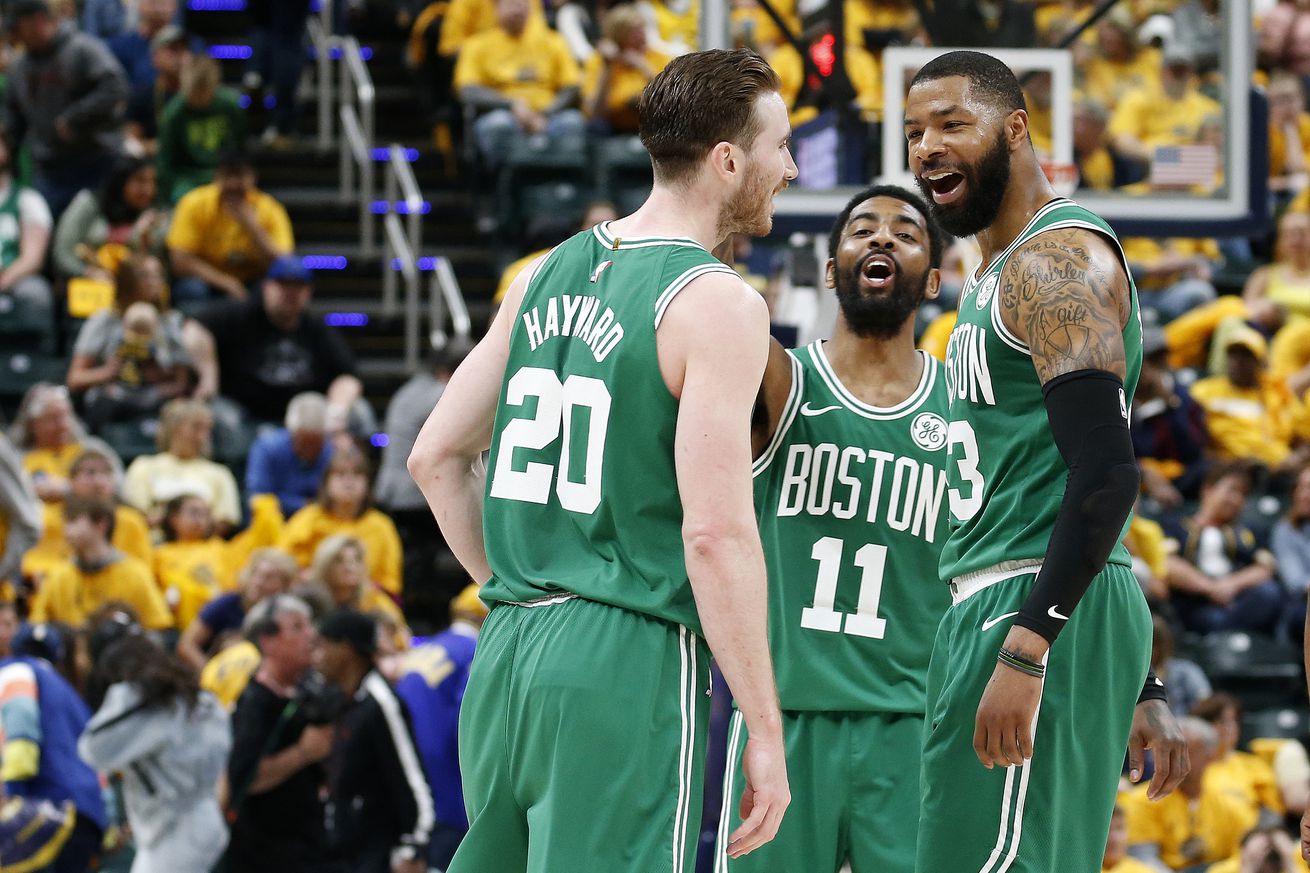 Boston swept a playoff series for the first time since 2011

1. The Celtics finished off the sweep of the Pacers by being the team they were throughout the first three games of the series. Boston was tough defensively and put together enough offense. The defense is something we thought we could count on from the Celtics, and now know will be there. Sure, the Pacers are banged up and limited, but it was more than that. It was multiple efforts by every guy on the floor.

As for the offense, Boston found something sustainable that should work throughout the playoff run. They attacked mismatches early. They got everyone involved, as seven players scored in double-digits. When it was time to bring the game home, they went to Kyrie Irving and Gordon Hayward as the ballhandlers, with Al Horford screening for them and shooters spaced around them. That’s tough for even a great defensive team to handle.

2. One of the ways you know Boston is engaged defensively is to watch their work off the ball. There was a play early in the first quarter where the Celtics were scrambled in transition and Irving ended up Thaddeus Young. That’s a mismatch for the Pacers. As Young went to post Irving, Boston executed a jump-switch off the ball to get Irving off Young. This started a cycle of switches where Irving “guarded” Young, then Myles Turner, then Bojan Bogdanovic before finishing the possession with Wesley Matthews. This type of connected, switching-off-the-ball defense is when you know the Celtics are at their best on that end.

3. Gordon Hayward’s first playoff series for Boston couldn’t have gone much better. He averaged 12.3 points per game on 48.6% shooting off the bench. But the stats don’t even begin to tell the story. Hayward was strong and physical on defense and he attacked the rim regularly on offense. It took the better part of the season to get here, but plays like this display the ability the Celtics signed Hayward for in the first place:

Gordon to the RACK! pic.twitter.com/ycH7Zlmk3n

4. With Marcus Smart out, it fell to two players to step up: Jaylen Brown as a starter and Terry Rozier as the secondary ballhandler. Brown did his part with solid defense against Bogdanovic and some good offensive moments. After struggles in the first couple of months of the season, Brown is fully back to the exciting player who looks like a building block for the future.

Speaking of struggles, the regular season was largely a disaster for Rozier. Maybe it was re-adjusting to a bench role again after starting in last season’s playoffs, but “Scary Terry” was just scary. In the playoffs, he’s stepped up for Boston. With Smart out, the Celtics needed someone to take on some of his role and Rozier has been that guy. His defense has been excellent and he’s making good plays on offense, like this one:

5. Once again, turnovers were an issue for Boston. The offense is shooting it too well, and finding too many things that work, to be so careless with the ball. The Celtics turned it over 11 times in the first half and 17 times for the game. Against the Milwaukee Bucks, the likely second round opponent, that type of sloppiness could sink Boston.

6. Beyond the off-ball switching, part of what made the Celtics successful on defense was varying their approach to defending certain actions. Since Victor Oladipo got hurt, Indiana has gotten a lot of mileage out of Bogdanovic running pick and roll/pop actions with Turner or Young. It’s become an effective pet play for them.

Boston mixed up how they defended it. In the first game, they fought through and didn’t switch the screen. Later in that game and in Games 2 and 3, the Celtics started jumping the ballhandler as soon as the screen was set. Late in Game 3 and in Game 4, after Bogdanovic started driving the ball more, the Celtics started laying back off the screen. Mixing up the defensive coverage is a way to keep opponents off-balance and will be important against the Bucks.

7. From the credit where credit is due department: Marcus Morris played a really good game off the bench for Boston. Not only did Morris stay within himself and take good shots (he shot 7-of-11 from the floor), but he was big on the boards with eight rebounds. He was also a big part of the defense that helped limit Turner and Domantas Sabonis to just 27 combined points. Morris’ up and down season has mirrored the roller coaster ride the Celtics have been on. Good nights like this will go a long way towards Boston making a deep playoff run.

8. Want another example of how good Hayward is feeling? He gets Turner on a switch and backs the ball all the way out to halfcourt, LeBron James-style. Hayward then attacks the NBA’s leading shot-blocker with a major head of steam and draws the And-1 play. Just another example of a part of the Boston offense that has unlocked here in the postseason:

9. And for an example of that championship-level defensive effort, we submit Irving getting after it to create a turnover that directly led to what was more or less the game and series-clinching dunk from Jayson Tatum (who had another good all-around game):