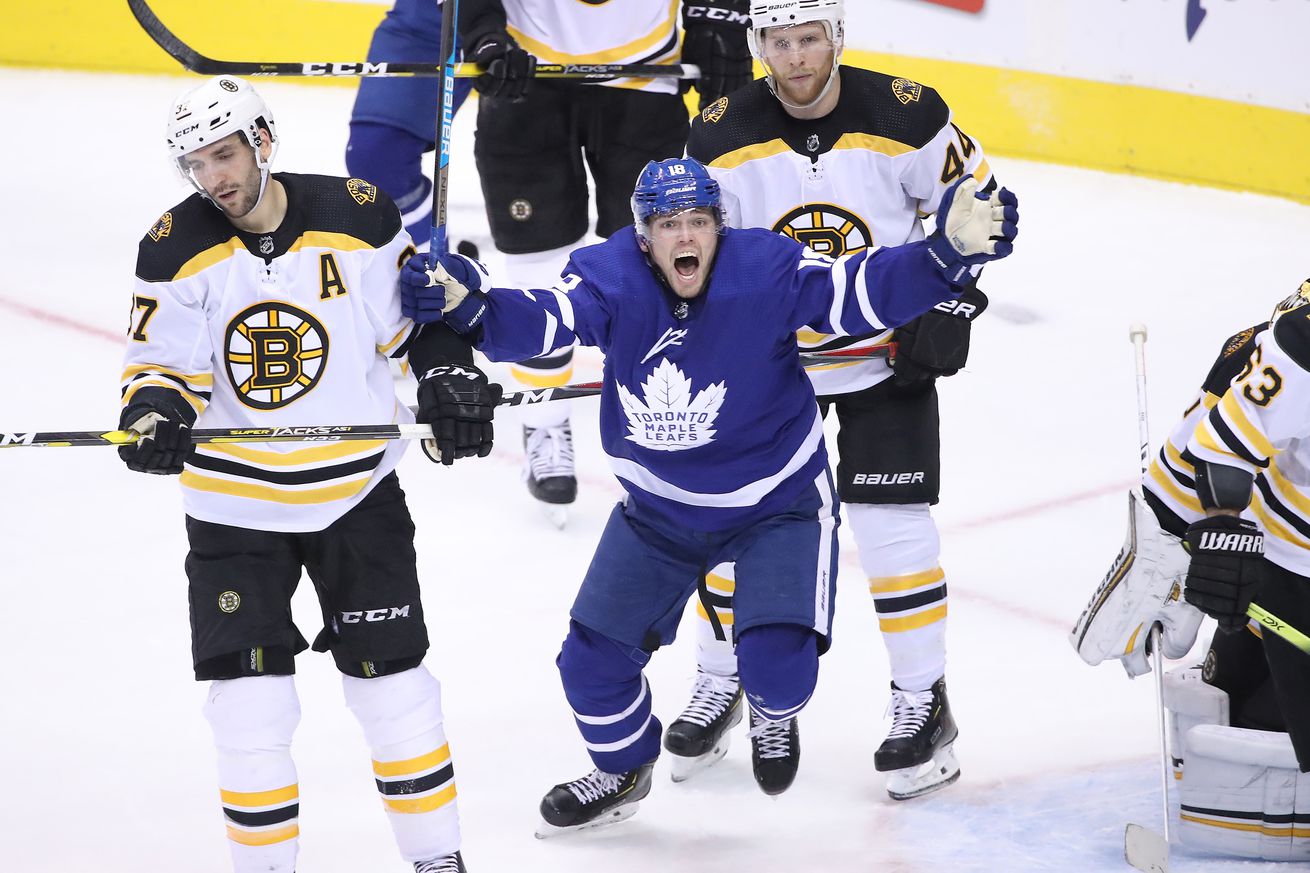 (Editor’s note: Our man Cam is studying abroad in Europe, yet he’s still out here creating content. What a competitor. Anyways, this came in late, right before Game 4, so please excuse any weird time issues. The analysis is still valid.)

During the regular season, these three combined to be virtually unstoppable. As the group has struggled to manufacture shot attempts, never mind scoring chances, rumors began to swirl the group could be broken up if goals are not produced in game four.

While the Leafs have waged a physical war of attrition against the Bruins’ most potent goal scorers, Toronto has adjusted its defensive strategy to limit the high-danger chances allowed. By condensing all five defenders in and around the slot area, the Maple Leafs limit the number of opportunities that can be generated from the most potent scoring area.

Mike Babcock has primarily deployed Mitch Marner-John Tavares-Zach Hyman, accompanied with Jake Muzzin and Nikita Zaitsev to counter the Bruins’ top unit. Bruce Cassidy started his top line in the offensive zone twice as frequently as he does in the defensive zone during the regular season. While Tavares and company are potent threats offensively, they’re also no slouches in their own zone.

Below is a clip from the first period of Game 3. Pastrnak enters the zone with possession, but lack of support leads to a quick turnover. Upon the Bruins regaining possession, the Leafs turtle into the middle of the ice to protect the slot.

In a screenshot from that sequence, it is evident that the Leafs are comfortable with Frederik Andersen saving a tough angle shot. Marchand is locked up and the Toronto forwards form a phalanx into order to eliminate a potential pass to Bergeron.

Marchand, who owned a 53.48% high danger Corsi for percentage for the regular season, was at 37.5% through the first three games. Pastrnak has been on the ice for five high danger attempts for, yet has surrendered nine against. Bergeron’s high danger numbers aren’t much better. For a trio that frequents the slot more than any other that dons black and gold, they have been unable to crack the collapsing system of the Leafs.

There are a few different ways that the top line could try and expose the Leafs defense. Below is a clip of play ensuing from a faceoff, where an errant pass leads to a Maple Leafs breakout.

The movement generated by Marchand curling back towards the middle confused the defense. As multiple defenders dropped back into net front coverage, Marchand sliced towards the crease. Pre-planned plays can work well with this group because of their immense puck-protection skills and innate passing abilities.

Another option is to spread out Toronto’s defense. Since all five Leafs swarm the slot, the defensemen at the point sit on the blueline with plenty of space. This opens up a wide array of options, such as one-timers or utilizing the time for open passes or potential tips. Either way, the Bruins have many defensemen who are comfortable with the puck on their sticks and can utilize their playmaking abilities.

For the Bruins to even the series, the team will need to rely upon their best players to produce. If the Bruins can incorporate movement and move the puck to the defenseman, they will gain time and space that will allow their forwards to promote their offensive skills and take over the contest.