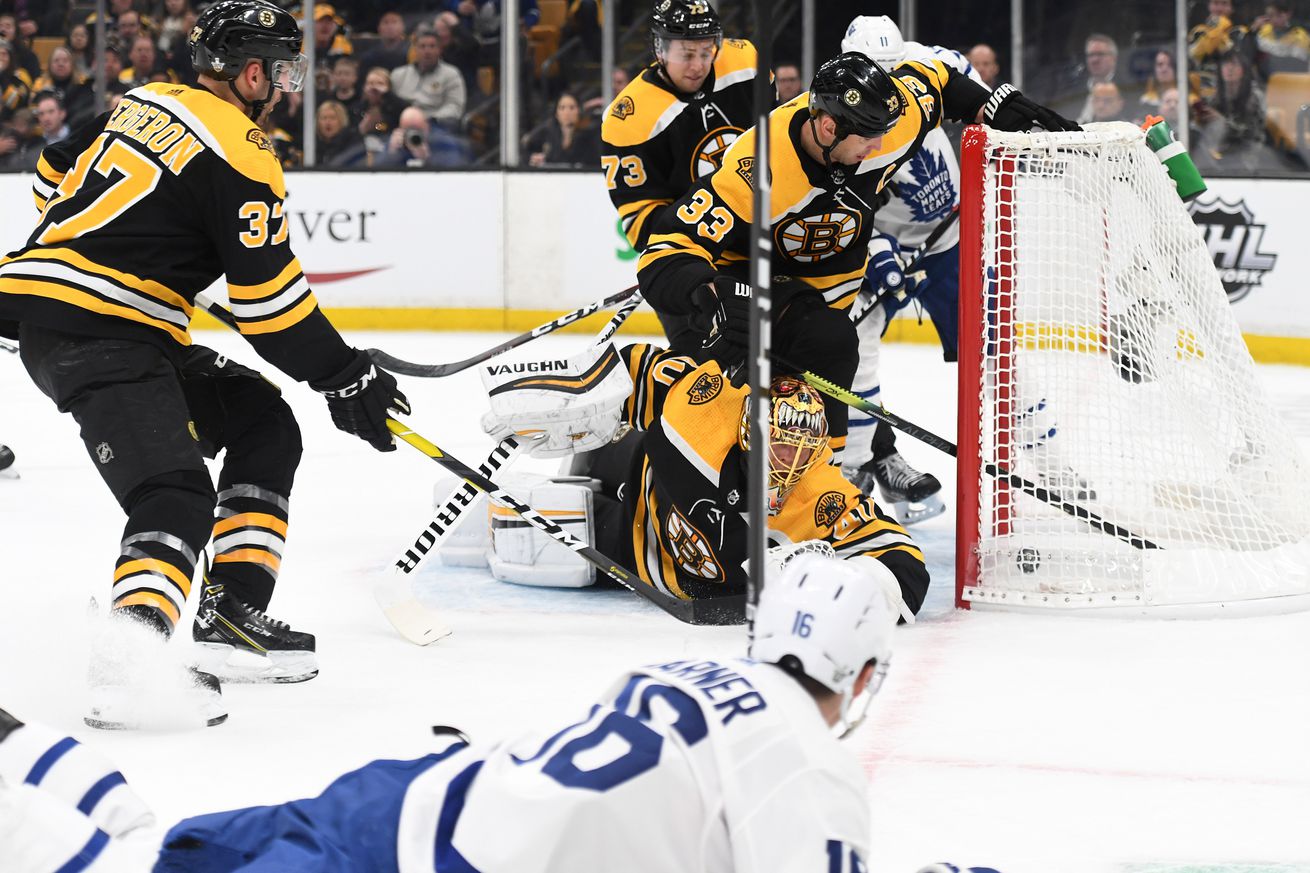 Despite outchancing Toronto in the second and being nearly even in the third, Boston went goalless through the last 40 minutes.

Head coach Bruce Cassidy, using the home ice advantage wisely in the first period, mostly kept Toronto’s first line (Hyman, Tavares, Marner) off the scoring-chance sheet. Boston made several dump-and-chases to establish some zone time, landed a few shots, and drew a penalty. Patrice Bergeron’s power play goal was almost an eventuality. The top line’s play continued, and it looked as though the B’s were able to roll their forwards effectively.

Early on, the B’s defense did a great job of settling the puck and finding teammates to pass it out. The first goal scored by Toronto was very nearly tipped wide by Mitch Marner himself before the Golden Rebound cleanup effort saw him score Toronto’s first goal. I’ll mention Tuukka Rask’s game now, because it will probably get glossed over in the horrendousness of the skating game: the first period was a flurry, with Boston getting outchanced 11-4, but Tuukka got us out of it, and continued to look sharp throughout the game. The tired skating in front of him hung him out to dry as the game went on.

The second period – with the longer line change – was a different story. Though the substituting went fine, Boston had trouble gaining the red line, and when they did, they were able to put plenty of pucks on net – including what looked like four shots in a row from Charlie Coyle (one, off the post, TECHNICALLY doesn’t count as a shot). However, there was a lack of quality shots – most that the Bruins took were awkward-angle or from so close (as deflections, too) that Frederik Andersen was able to stop it. When Boston got an offensive zone faceoff, they double – nay, TRIPLE-shifted the top line.

Toronto, meanwhile, had no ill effects of the long change. Over and over again, the Leafs found skating and passing seams, and capitalized thoroughly on Boston’s turnovers at their attacking blue line. Marner and Tavares both had golden breakaway chances, and Marner’s conversion to a penalty shot goal was the backbreaker; though it was probably mostly physical exhaustion, you could see the look on Jake’s face when discussing it as a mistake. (Good on him for being accountable, too. I get the sense he’ll learn from it.)

Then, the exhaustion seemed to set in. Chara looked even slower, Clifton saw his minutes trimmed, and it became Charlie McAvoy’s job to skate through almost half of the third period, just shy of 9 minutes (compare this to Chara’s 5 total minutes in the third). Leashes were pulled tight on the weaker links in last night’s game.

As play wound down, the Bruins tried to compensate by playing Toronto’s game, turning their east-west passing into longer and longer attempts at breakouts/breakaways. The passes were off-target or were called for icing. The ‘identity’ chances for Boston were where the better scoring chances came, as Charlie Coyle was a man possessed near the Toronto net. His flurry of shots and good forecheck were unfortunately paired with less backcheck in the third period – and let’s hope that it was a coaching instruction that’s correctable, and not a habit for the forward. He can certainly skate, it just looked as though he was content with gliding back and letting a winger cover for him.

With so many things to address, it’s anybody’s guess as to how the Bruins will make changes for Saturday’s tilt. Do they alter the lineup? Do they continue to try and keep pace with Toronto, or get back to their controlled attack and take better care of the puck? At least the goaltending isn’t the biggest question mark headed into Game 2.