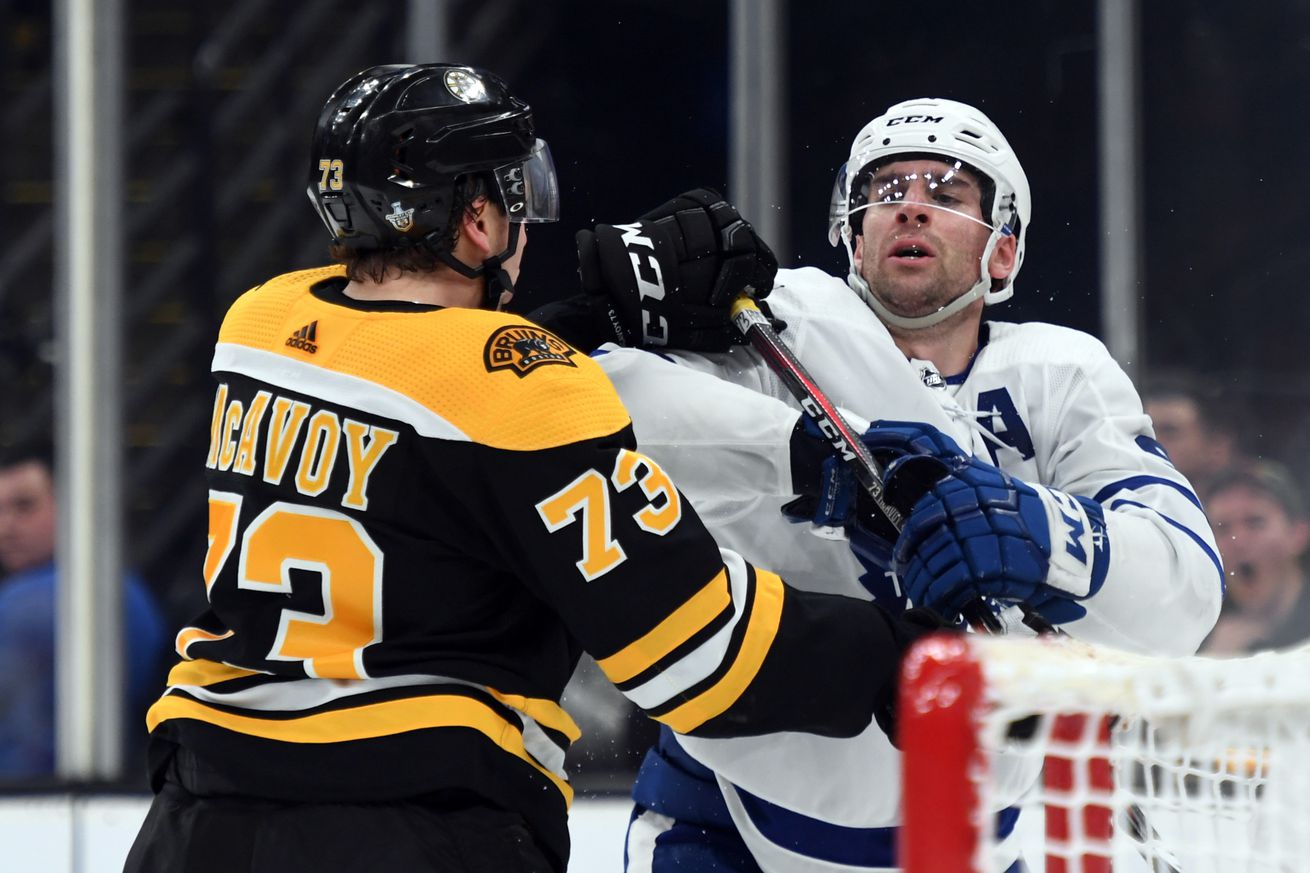 After a lackluster Game 1, which David Backes called a “slap in the face”, Boston came out for a full 60-minute effort.

The Bruins left Game 1 behind them in a big way. Boston was not going to be bullied again, especially not on home ice. I’ve got two short-ish notes from Game 2…

Physicality as a necessity… until it’s a distraction

A heavy, heavy start for Boston – evidenced by head coach Bruce Cassidy rolling out his “fourth line” of Joakim Nordstrom, Noel Acciari, and Chris Wagner – sustained through to the early third period, and only calmed down when a three-goal lead was well in hand. Toronto tried to get pucks wide and deep with tips at the Boston bench/penalty box, but were called for icing and intentional offsides more than once and were jammed by Boston’s coverage at the center line. The B’s stepped up, literally and metaphorically. Boston was hitting like they had Game 1, but for whatever reason, Toronto was biting on retaliation and taking penalties for it. Frederik Gauthier stupidly held McAvoy against the Toronto bench, and after Chara took a delay of game penalty, Kadri negated it with a hook while his team was on the power play.

Now, to address the extracurricular physicality… and there was plenty in this game. Officiating seems to keep the whistles away in the playoffs, but that’s generally a play on the eyes. The threshold for calls is raised, resulting in more “regular season” penalties being overlooked, but there is a similar if not increased rate of penalty calls in the playoffs. THIS WAS NOT ONE OF THOSE GAMES. In the first, there was the matching call on Jake DeBrusk and Nazem Kadri, which did little to quell the heated exchanges between the players. David Pastrnak was called for a charge – PASTRNAK. Yes, he was hitting anything in sight, same as everybody else, and if refs are trying to maintain control of a game, that call was probably warranted. The issue became how often the refs could blow the whistle.

The attempt by the refs to calm things down in the second period by penalizing seemingly minor penalties (Frederik Gauthier for roughing/holding, and Kadri for a weak-by-comparison hooking call) might actually have backfired, because DeBrusk kneed Kadri (intentional or not, knee-on-knee contact is a punishable offense), and then Kadri lost total control, sending another Bruin to the locker room before rocking DeBrusk’s face and earning his ejection and imminent suspension in spades.

Though their mettle would be tested late with the losses of Torey Krug and Connor Clifton, the excellent read of play from Charlie McAvoy (again, as his coverage was outstanding in Game 1) and Matt Grzelcyk, who absorbed hits calmly and had a stick in every passing lane within reach, was spectacular. These two have a future together as a top pair in Boston and you read it here first.

For this author’s criticism of Charlie Coyle’s defense in Game 1, he did a much better job of supporting his defense – most notably when Clifton was overwhelmed with Patrick Marleau’s experience in the corners at some point in the second period. Clifton had control, but was mildy overwhelmed, and Charlie swooped in to assist in clearing the puck to safety.

Readiness from Boston’s stars was apparent, and I don’t mean in the skill they exhibited. There was an obvious focus on caring for the puck and feeding the puck to space in front of skaters rather than trying to hold on to it for too long or make a cute play. There were times that it looked like Pastrnak might have done that, but honestly, he’s a player (similar to Marchand, who has years more experience) that should be encouraged to be creative offensively. It was never in a dangerous spot, at least not in Game 2, and he made smart plays to his defense late in the game to protect the lead.