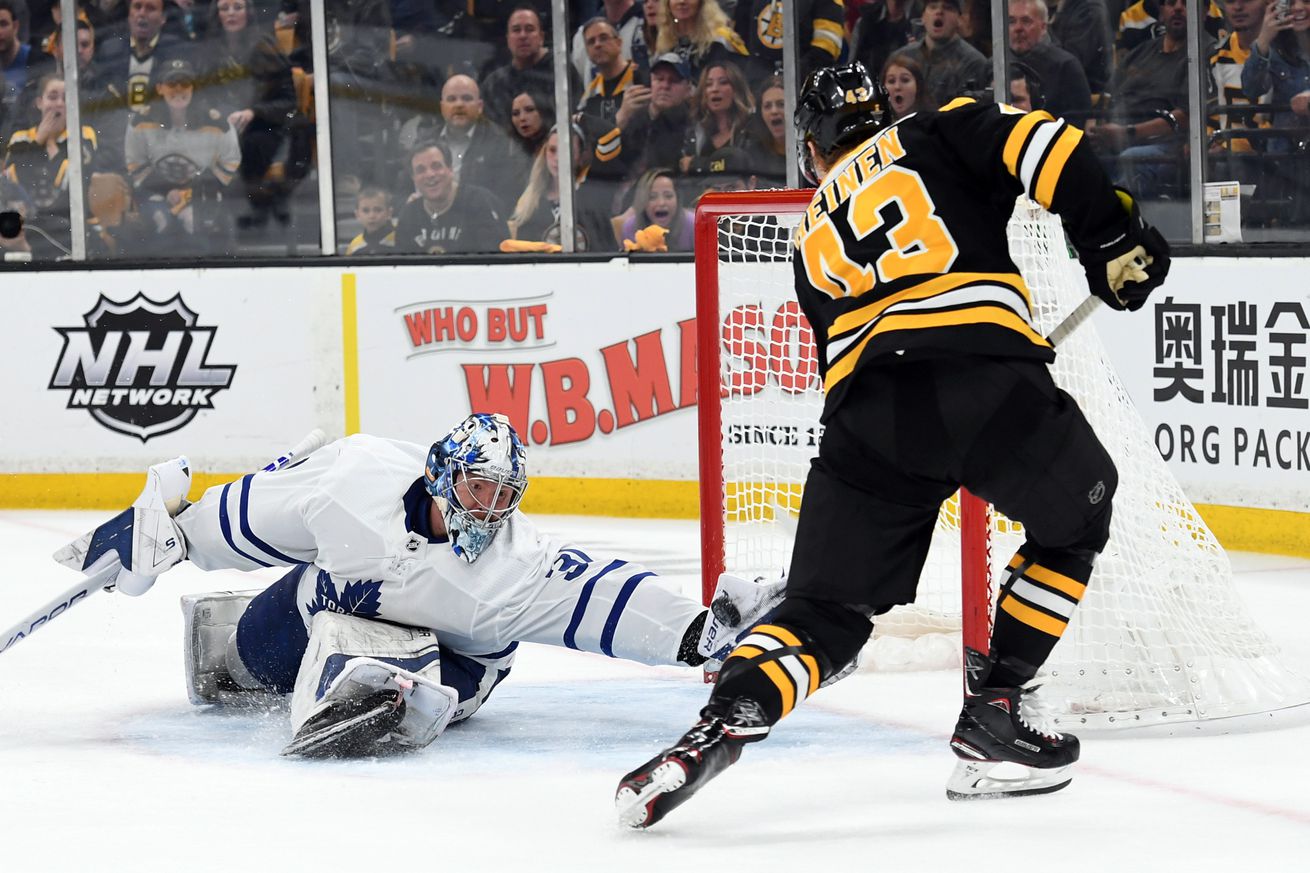 With a few earlier whistles, there may not have been the blatant efforts to injure opposing players.

Easily the loudest that TD Garden has been all season, coach Bruce Cassidy started with his grit line of Noel Acciari, Joakim Nordstrom and Chris Wagner. David Backes was also back in the lineup, bringing his patented heavy play in place of the ill Marcus Johansson. Hopefully nothing serious!

Early heavy pressure from Boston resulted in an outstanding workman’s-effort goal from Charlie Coyle, who had probably already earned this goal in Game 1. 1-0, Bruins!

The Bruins advantage continued with both physicality and good defensive anticipation. There was more than a bit of scrappiness, best evidenced by Jake DeBrusk and Nazem Kadri getting tangled near the side boards. It looked kinda obvious that Kadri dragged DeBrusk down, and swung at his head from his back. DeBrusk retaliated, giving each of them two minutes.

As the period wore on, it was obvious that Boston came to win this game, no questions asked. Pouncing on loose pucks and hounding Toronto’s puck carriers, it was only a matter of time before a second goal came, and it DID. David Pastrnak retrieved a stretch pass that just missed the glove of Jake Muzzin and made a slick wheeling-backhand pass to Brad Marchand, all alone with nothing to do but score, I guess? 2-0, Boston!

With a late penalty to Pastrnak for charging (the contact was legal, the run-up to it was not), Boston killed half a penalty with spirit and headed to the locker room with that 2-0 lead.

Pasta’s penalty kil’t, the Bruins got back to the success they found in the first. After returning to 5v5, it took no time at all to get right back on the defend-first, attack-smartly pattern. Ideal anticipation from everyone – and I mean everyone, INCLUDING David Backes, who made some outstandingly skilled plays at the attacking blue line to hold onsides/dump deep/truck stick Leafs players – gave Boston chance after chance. The shot count was 18-9 at the midway point of the second and it felt a LOT more lopsided than that.

Danton Heinen made an excellent play on a stalled puck behind Toronto’s net, and tucked it in next to Andersen, who was still checking the telescope for shots coming from Mars. (It was Nylander’s fault.) 3-0, Boston.

From there, Toronto really started to boil over. Between penalties to Frederik Gauthier for holding seemingly in retaliation for a clean hit from Chris Wagner, to Kadri hooking Marchand while the Leafs were on a power play, Toronto couldn’t get out of their own way.

Torey Krug didn’t return, which was disappointing, but likely best for his health. Not as great for the health of others was the continued absence of whistles, and the players absolutely took advantage. In a few seconds’ span, John Tavares feigned being hit with a high stick, interfered with Rask, and was crosschecked by McAvoy to clear him from the crease. Nothin’. In other instances, heads were held and helmets removed without anything more than a minor penalty on Krejci.

Toronto finally sustained some attack time, and put one behind Rask off the stick of none other than Kadri to get on the board. 3-1, Bruins still lead.

Not to be mistaken for a quality player, Kadri would challenge for Cheap Shot of the Year after retaliating a clean hit from DeBrusk (on a different player in Patrick Marleau) by crosschecking him in the face and into the glass from a distance.

Kadri was ejected, and Boston enjoyed a major power play. It would be shocking if a suspension wasn’t passed along soon. Fortunately, DeBrusk skated away and Patrice Bergeron capitalized early in the advantage.

Without much ability to counter with a man in the box, Toronto was relegated to skating it out and taking the loss.

Off to Toronto for Game 3 on Monday at 7PM! Enjoy the Marathon, everybody!