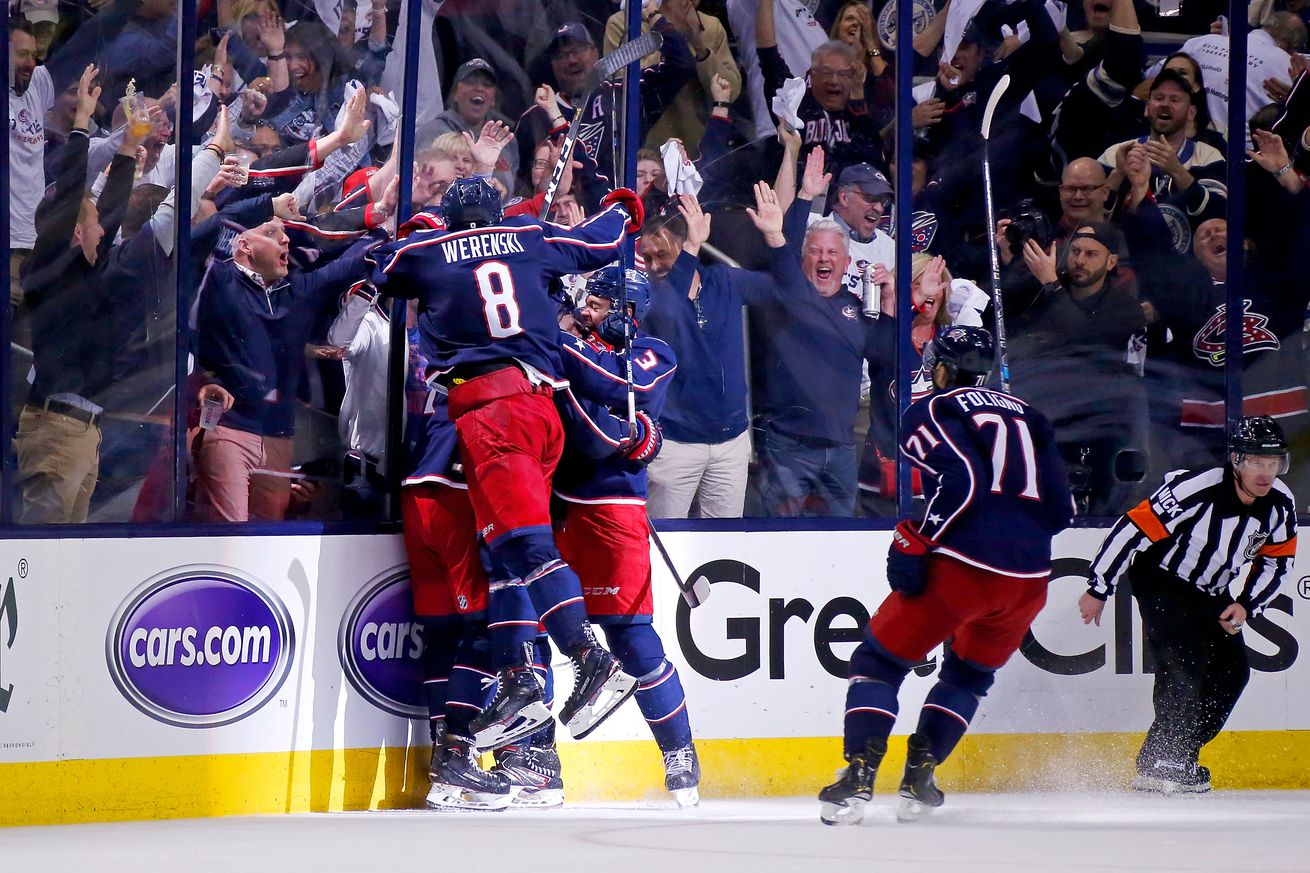 You’ve probably heard of the bigger names, but this Columbus roster is pretty deep.

When the Bruins and Maple Leafs kicked off their first round series, we were all pretty tired of each other. We knew the Leafs’ lineup up and down, and there were no real surprises. A divisional opponent and 3 playoff match-ups in 6 years will do that to you.

With the Columbus Blue Jackets, however, we’ve got a bit more mystery. Sure, the Bruins and Blue Jackets play 3 times per season, but it’s hard to keep a close eye on a team like Columbus.

Before the second round begins, let’s take a look at the projected Blue Jackets lineup, and learn some of the names you’ll be hearing over the course of the next week or so.

Panarin is the Blue Jackets’ biggest name, a guy who is likely skipping town once this Columbus run ends. Dubois and Bjorkstrand are two lesser-known guys who have held their own playing with the talented Panarin.

Dubois is the Blue Jackets’ future, just 20 years old. The youngster scored 27 goals this regular season. Bjorkstrand followed up a 40-point season last year with a 36-point campaign this year.

We’re familiar with Dzingel and Duchene from their Ottawa days, and from when Dzingel was a rumored Bruins trade target. Dzingel had 12 points in 21 games with Columbus after the deadline, but hasn’t scored yet in the playoffs.

Duchene has been on fire. He had a quiet end of the regular season with Columbus, but has 7 points in 4 playoff games.

Atkinson is a guy to watch. The former Boston College Eagle went bananas this season, scoring 41 goals, a hefty bump from 24 last season.

This will probably be the Blue Jackets’ scrum line. The veteran Foligno always seems to mix it up against the Bruins, and Josh Anderson is no stranger to the physical game.

Texier is an interesting case: he’s only 19 years old, and is a native of France, which is pretty cool. He only had 2 NHL games under his belt when the playoffs began, but has recorded 2 goals and an assist in Columbus’ 4 playoff games. NOT BAD.

Okay, maybe I spoke too soon: THIS will probably be the Blue Jackets’ scrum line. Boone Jenner plays a heavy game, and Brandon Dubinsky is a grit-loving coach’s dream. The Bruins saw enough of him during his time in Manhattan to know what his game is like.

And then there’s ol’ buddy Riley Nash, who had a brutal regular season but remains a smart, reliable player. Chances are there will be a big Riley Nash moment in this series, whether it’s a defensive play or a huge faceoff win.

This is a top pair that any NHL team would love to have. Jones has continued to develop as a fantastic NHL defenseman since arriving from Nashville in the Ryan Johansen trade.

Both of these guys are smooth skaters with great vision.

Nutivaara missed the end of the first round due to injury, but is apparently ready to go for Game 1. If so, he improves the Blue Jackets’ second pair.

Savard is a smart, physical defender who is, as the cliche goes, hard to play against. This is certainly not a bad defense pair, but definitely a step down from the first pair.

This bottom pair will depend on what John Tortorella wants to do. If Nutivaara is healthy, Tortorella will have some choices to make on what to do with the third pair.

Still, all 3 are capable, if uninspiring, defensemen.

We all know Sergei Bobrovsky, right? The two-time Vezina Trophy winner posted a career-high 9 shutouts this season, and has been excellent in the playoffs.

In the first round against Tampa, Pierre McGuire laughably said Bobrovsky was nervous because he wasn’t making in saves in warm-ups (when goalies normally don’t…you know…try to make saves), and suggested the Blue Jackets pull him when they went down 3-0 in Game 1.

They didn’t pull him, and after giving up those 3 goals in Game 1, Bobrovsky allowed just 5 goals in the next 3 games.

The Bruins have fared pretty well against Bobrovsky in his career: the Russian netminder is just 3-6-2 against the Bruins, with a save percentage of .889 and a GAA of 3.90.

Still, this is the playoffs, and a hot goalie can make anything happen.

Anyone on this Columbus team keeping you up at night? Anyone you’re looking forward to seeing more of?