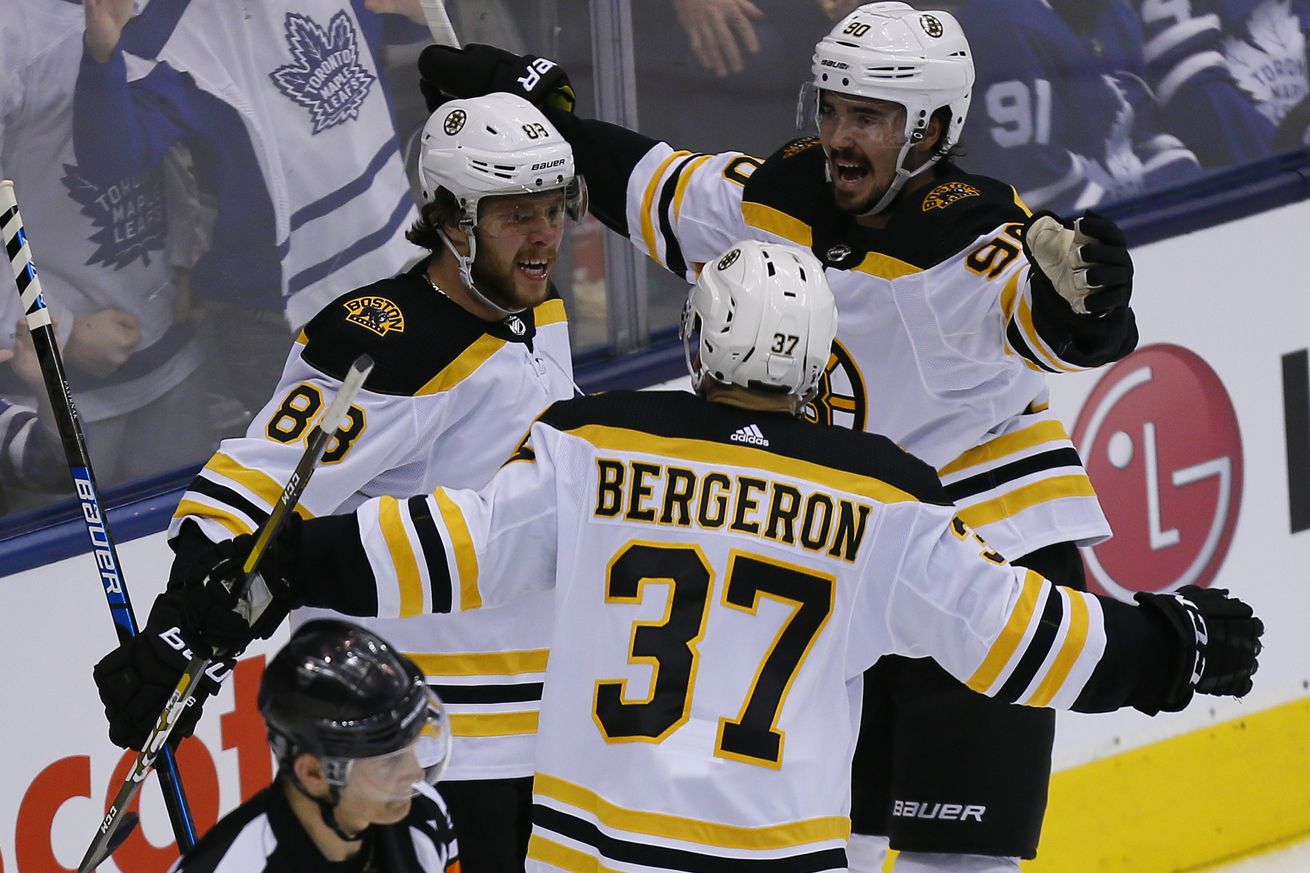 The Bruins power play has been a powerful force. Let’s see why its been so vital to this series and how it could get them through Game 6!

The Bruins’ power play, although too frequently immune to shorthanded strikes, has been lethal all season long. The team ranked third in the league on the man advantage during the regular season. The Bruins struck in each of the first four contests on the man advantage, yet failed to record a tally on three chances in game five. The Bruins are a cumulative five of 14 on the power play for the series, which amounts to an impressive 35.7% and ranks second among all playoff teams. As the Bruins have been stymied offensively when at five on five, the team needs to cash in on the power play in order to be successful and take back the series.

The Maple Leafs have restricted the Bruins at even strength, limiting Boston’s shot attempts and taking away the middle of the ice. The Maple Leafs have notched 16 more scoring chances than their counterparts. Perhaps the most telling stat is that the Bruins have only scored seven five on five goals in the series and only one in their three losses. In order to make up for the listless offense at even strength, the Bruins need to depend upon their power play and trust their in zone defense to buttress against the Leafs’ dangerous forwards.

The “umbrella” concept works extremely well for the Bruins because of the system’s ability to create passing lanes, spread the ice, and have the potential for quick shot opportunities. The 1-3-1 structure systematically constructs triangles across the ice, which in turn open lanes for shots or passes.

The umbrella system perfectly adheres to the strengths of the Bruins’ top players. Torey Krug usually occupies the point position, as he possesses outstanding passing ability and is not afraid to shoot from the point (Remember what he did in Game 7 of this series last year?). The top lines’ chemistry and superb talent make them incredibly difficult to stop at even strength, never mind a man down. Each member (Brad Marchand, Patrice Bergeron, and David Pastrnak) have the ability to create space with their feet, find open teammates in crowded areas, and beat goaltenders with regularity.

The chart above, from Micah Blake McCurdy, illustrates the unblocked shot rates for during the regular season for the Bruins while on the man advantage. The Bruins access high danger areas of the ice via the strong skating of their forwards. The forwards create and identify lanes to access the most dangerous part of the ice, the slot. The occupant of the slot position, in the center of the umbrella, is frequently looking for passes from the outside to generate a quick shot attempt or one-timer, as multiple defenders will quickly pressure him. Being able to find and exploit the soft spot inside the opponents’ penalty kill has been a strength for the Bruins.

The video below shows the Bruins ability to find identify a weak spot in the zone and quickly strike. The opening goal of the series developed from the Bruins entering the zone with possession, Marchand spinning out from two defenders and protecting the puck along the wall before dishing it to the point man. Grzelcyk quickly returned it to Marchand, who faked a pass back and cut hard to the net. Bergeron identifies that Marchand is looking for an outlet and streaks to the net. The passing lane is perfect, and Marchand finds his linemate for a beautiful goal.

The umbrella naturally creates openings for cross-ice passes by spreading the defenders out. Passes to the point man and the man in the slot can lead to the defense pinching and constricting the middle of the ice, freeing up the attacker on each circle. Each attacker on the outside of the umbrella can use their movement to angle defenders off of their axis and find a shooting or passing lane. With creativity abound and many options, the Bruins can utilize their legs to open up lanes for cross-ice opportunities.

If the clip below looks familiar, it should. The Leafs make sure to close the backdoor passing lane to Bergeron, who again is cutting to the net. Marchand instead opts to fire the puck on net, leading to a juicy rebound that finds Bergeron out front.

With all other options closed off, Marchand lets one fly. A deflection ensues, as the mass of bodies in between the shooter and net forces the puck to careen off kilter. With the screen in front, the redirection is difficult for Andersen to spot. The chaos in front leads Bergeron to back out and pounce upon the lucky bounce.

Locating shooting lanes proves pivotal for the Bruins. At times in the series, the offense has appeared tentative; players are looking for an extra pass instead of firing the shot off. Shots generate rebounds, scrums, and chances. One way to force the issue and play with urgency is to puck pucks on net and crash the blue paint.

With an extra player on the ice, one attacker should always be open. The Bruins typically do well at pinpoint the open man and working to stretch the defense and shift the zone around. By moving the defenders, space opens in which black and gold jerseys can fill or a defender can be isolated and forced to make a choice. By putting one defender on an island, he is forced to choose between the puck carrying and the open man. If he chooses puck carrier, that player can pass to the open man. If he decides to shield the open man, the puck carrier and force the issue and utilize the open space available to him. By moving into this space, other defenders might challenge and abandon their assignment, leading to another and perhaps better passing option.

The video below is the Bruins’ first tally from game four, where Charlie McAvoy beautifully moved into the open area after tic-tac-toe passing tore the Leafs apart.

Again, the Bruins attacked the left side of the ice and entered the offensive zone possessing the puck. Krejci curled back and found Grzelcyk alone up top. He faked the shot, which caused Jake Muzzin to encroach upon Jake DeBrusk, alone in front. DeBrusk was unattended because of botch coverage to the right side of Andersen, where both the forward and defenseman remiss and collapsed to take away Krejci. As Muzzin shifted, Charlie Coyle became free and Grzelcyk connected with him on a tape-to-tape pass. Kapanen, who had ventured out of position to challenge Grzelcyk’s perceived shot attempt, left McAvoy, who keenly spotted the open oasis of space in the slot and jumped into the scoring area. He finished off Coyle’s feed and blissfully celebrated.

This play is an example of how the Bruins can manipulate the Leafs’ penalty kill to abandon their assignments and bend out of shape. The Bruins can then fill the voids left and look to capitalize on quality chances.

Forcing the Maple Leafs’ Out of Position

This idea corresponds to the above idea. While the above example focused on McAvoy using his intelligence and high hockey IQ to jump into the play, the Bruins can force the Maple Leafs to fall out of place in other ways. Shot generation and scrums in front of the net can force the defenders to pick up the nearest forward, causing disarray in their system and formation.

In Pastrnak’s power play goal from game four, he drops into the middle to find the soft spot behind the Leafs’ out-of-position defense.

After winning the faceoff back, Pastrnak fires a shot through bodies that Andersen cannot control. The rebound careens back and offers the Bruins a couple of chances. Once Nikita Zaitsev touches the puck, there is immediate pressure upon him. As the Bruins have the man advantage, there should always be multiple attackers pressuring the defense if the Bruins happen to lose control. After Zaitsev fumbles the rubber away, Marchand regains control and neatly flips it to the front of the net. Ron Hainsey originally abandoned his post guarding the front of the net to challenge a potential pass to Patrice Bergeron on the right faceoff dot, not realizing that Mitch Marner collapsed to provide support. In the middle of no-mans-land, Hainsey had to just sit and watch Marchand slide the pass past him and Pastrnak buried the rebound.

Coyle’s game three tally also illustrates how the Bruins can utilize shot generation and rebounds to force Toronto out of position. The Bruins’ second unit controls the puck below the red line. As all four defenders drift below the dot, Krejci feeds Grzelcyk at the point. Grzelcyk, with no one in the vicinity to challenge him, rifles the puck towards the frame. The rebound careens out to the other side, where Heinen attempts to bury it and is stick-checked by Travis Dermott. The other defenders are slow to react and leave Coyle all by himself in the front to finish off the chance.

The Bruins can bend the Maple Leafs out of shape by forcing them to be reactive instead of proactive. When the Maple Leafs can be proactive, they can suppress the creativity of the Boston attackers and stymy any rhythm that the power play can generate. Using movement and passing lanes, the Bruins can find shooting lanes. Rebound generation forces Maple Leaf defenders to react and lose their shape, allowing Bruin attackers to find space and time.

If the Bruins are to win game six and force a seventh and final game of the series, their power play will likely have to be a factor. As five on five scoring has been curbed through the first five contests, the Bruins have leaned on their man advantage to light the lamp.